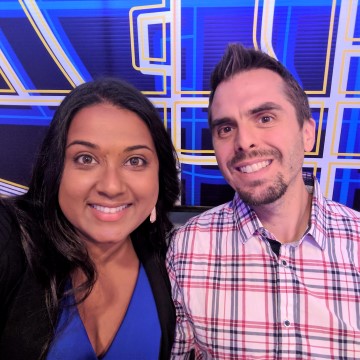 This past week, I attended two great performances in Toronto, The Curious Case of the Dog in the Night-Time, the Tony Award winning play based on the popular novel of the same name, and Arabella, a Canadian Opera Company production written by Richard Strauss. Having the chance to see these two world class performances in the same week reminded my why I could never get bored of living in Toronto. On this site, Yashy and I are always relating the great kid friendly discoveries we make in the city, but sometimes, we just need a date night. Last Tuesday we had one – for the first time in seven months!

After being away from Toronto for five months, during which time we were always in the company of our two beloved but often noisy children, Yashy and I finally escaped to one of our frequent date night destinations, the Princess of Wales Theatre, where we took in The Curious Case of the Dog in the Night-Time. With the rare excuse to put on some nice clothes and walk through the city together, we were excited to return to a theatre we hadn’t been to together since attending The Book of Mormon almost three years ago to the day.

The Curious Case of the Dog in the Night-Time 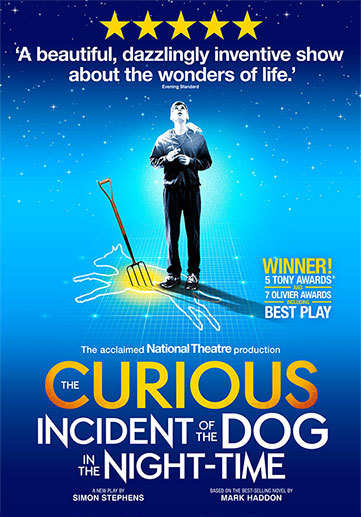 We have always enjoyed Mirvish performances at the Princess of Wales Theatre. In addition to some great musicals and broadway productions, we have seen a number of great kids shows in the theatre and love seeing new productions, even though we don’t get to go often enough. The Curious Case of the Dog in the Night-Time has achieved a great deal of success in London’s West End as well as on Broadway, where it won the 2015 Tony for Best Play. Neither of us knew anything about the production as we walked into the theatre, which is a nice way to experience the play. It opens with a jarring scene and continues to unravel surprises throughout the story.

If you don’t want to know anything about this play, skip the next two paragraphs. I’ll limit the spoilers but do discuss themes and reveal some of the opening plot points.

The play opens with the use of loud beats and strobe lighting to reveal a dog lying dead on the stage. The curious sound choices are quickly explained as we are introduced to the play’s protagonist, 15 year-old Christopher Boone, a young math genius who, in his own words, ‘always tells the truth’. Viewers who have ever had the fortune to know someone on the autism spectrum will quickly recognize the signs in Christopher. He answers questions without irony and is frequently misunderstood by those around him. We first encounter Christopher discovering the dead dog, which belongs to a neighbor. He is initially the prime suspect in the dog’s death and soon afterwards, makes it his personal mission to discover the culprit.

Challenging and occasionally abrasive, the story places important focus on the experiences someone like Christopher must go through on a daily basis. I was reminded of Sam from the recently released the Netflix show, “Atypical”, a show that actually taught me a lot about how individuals on the autism spectrum deal with the world around them. Both Christopher and Sam struggle to deal with unknown settings and loud atmospheres, but both are willing to face their fears when focused on a problem that they are determined to solve. In The Curious Case of the Dog in the Night-Time, Christopher faces realities that all of us would struggle to accept, and the play adeptly deals with his journey to solve several mysteries presented throughout the play. I can understand why this play has been so warmly received. It’s smart, entertaining, and educational.

As Toronto’s premier theatrical production company, the Mirvish Theatre presents a wide range of productions year round and it is a true Toronto gem. While it is more expensive to attend a play than visit a movie theatre, our nights at Mirvish productions rarely disappoint. Tickets to The Curious Case of the Dog in the Night-Time, run from $60 to a little under $200 per ticket, and we have always found that they make an ideal gift for entertainment lovers. My only real qualm with Mirvish Theatres are the poor drink and snack options available at their concession stands. They have no craft beers for sale and a very limited wine selection. Considering the cost of a night out at the theatre, I am always disappointed that I can’t enjoy a good beer during the show. Hopefully, as craft beer loving theatregoers from my generation and the millennials that will soon follow start attending more Mirvish productions, things will change.

After attending The Curious Case of the Dog in the Night-Time on Wednesday, my opera-loving Dad and I attended Richard Strauss’ Arabella at the Four Seasons Centre for the Performing Arts on Friday evening. I confess to knowing little about opera, but my Dad is always looking for a partner to attend a show when he is visiting Toronto. I decided to join him last season to see Carmen, one of the few operas with which I am familiar. After greatly enjoying that production, I took him up on the offer to see Arabella and was once again happy to have attended.

Like I said, I’m completely in the dark with my opera knowledge. After seeing Carmen, I wrongly assumed that all operas are tragic and spent most of Arabella awaiting a tragedy that never befell. I was also excited to see an opera performed in German, a language I have been studying, but quickly discovered that operas are not ideal places for language practice. I likely wouldn’t have caught half of the words even if it were performed in English. Since performances at the Four Seasons Centre do contain subtitles posted high above the performance, I was able to follow along with the plot, which was something of a comedy of errors blended with a love story. The simple story provides the backdrop for the production’s hypnotic music.

Operas at the Four Seasons Centre are produced by the Canadian Opera Company (COC) and I have definitely become a fan. The theatre is exquisitely designed, and its acoustics rival the similarly wonderful Roy Thompson Hall, where the Toronto Symphony Orchestra perform most of their shows. If nothing else, the operas performed by the COC are like medicine for the ears, an evening respite from the cacophony of engines and sirens one often encounters on the streets of Toronto. In the orchestral pit, the conductor leads dozens of musicians through waves of music that have the power to simultaneously exhilarate and relax listeners.

Like many Mirvish productions, the performances by the COC are Toronto treasures. Tickets for the COC range from $50 all the way up to $400, but subscriptions packages are available that do offer some nice savings. Half price Youth tickets are also available for attendees 15 and under, though I didn’t see many patrons in that age range. Craft beer is also problem at these productions. They were only offering Mill Street Organic Ale at the Arabella performance. Drinks are not allowed into the theatre either and so seeing the opera while enjoying the pleasures of a craft beer isn’t an options in Toronto’s upscale theatres. (Okay, I admit I am craft beer obsessed, but I know I am not alone! We are a growing army.)

Arabella only has one performance remaining, on Friday, October 27th, but the COC is also performing The Elixir of Love until November 4th. After a hiatus, the season will continue on January 20th with Verdi’s Rigoletto. Three additional operas are also scheduled for the 2017/18 season, which ends in May. As for Mirvish, Yashy and I are both excited by the return of the Come From Away, which will return this February and the theatre company recently announced that Hamilton will be part of it’s 2018-19 production schedule. Some exciting times lay ahead on the Toronto Performance Art scene.

We haven’t had too many lately, but Yashy and I do enjoy our date nights. Check out some of our past dates in Toronto. We recap some of the great places to eat in the city, recount the dates when we have looked for a unique couples experience, and, of course, review the past theatre experiences I mentioned above.