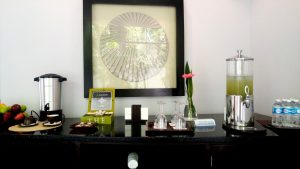 Confession: I have never had a massage. Never had much interest or use for one, and so when Yashy asked if I would join her for a kid free afternoon at the Vassa Spa during our stay at the Azul Fives all-inclusive resort, I agreed in the spirit of trying something new, especially since this was a vacation in which we were making a conscious decision to relax. No dragging the kids on 8 hour walks through busy city streets, no cultural exploration through long museum corridors, and no hour long waits to be seated at trendy restaurants. Our trip to the Azul Fives was the first vacation Yashy and I had ever planned where we intended to stay in one place, which was a good reason to add a spa treatment to the agenda.

Disclosure : This service was provided as part of our Air Transat partnership with Azul Fives but, as always, opinions are totally ours! 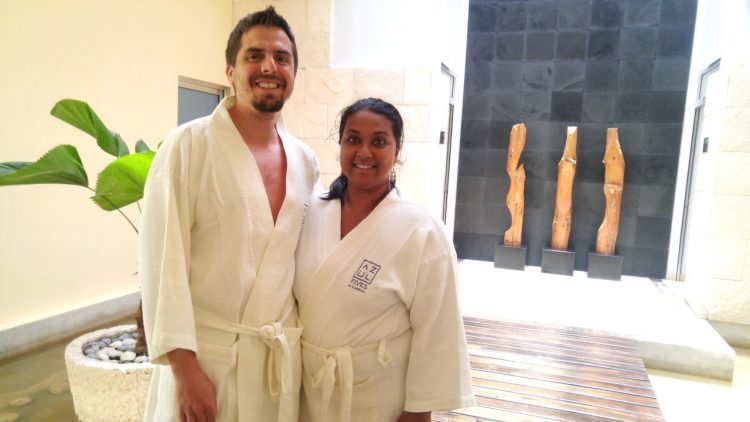 And so on our third day at the resort, we dropped the kids off at Azulitos Playhouse, an all day kids centre that also has babysitters available for kids under 4, and walked over to the Vassa Spa shortly after breakfast. We began the visit in separate men’s and women’s dressing rooms, which were unlike any change room I had ever seen. Complete with a sauna, steam room, and two personal Jacuzzi, as well as some healthy snacks and herb infused water, I spend the next 15 minutes doing something I rarely get to do, relaxing alone with some time for reflection. I began to understand why spending an afternoon at the spa is a regular way of life for so many people.

Yashy and I were soon collected and escorted upstairs where the true magic happens. The spa contains a number of separate rooms offering exotic sounding services like a Water Journey Ritual, a Holistic Raindrop Spa, and a Moonlight Romantic Massage. I began to think I had wandered the Imperial House of Japan at the invite of the emperor. We were taken into a second waiting area, facing a large picture window looking out into the mini rainforest that lies at the centre of the resort, and I fell into a further state of relaxation, preparing me for the Relaxing “Vassa” Herbal Massage we were about to receive, my first massage. Fifteen minutes later, we switch rooms again and met our masseuses: a woman for Yashy and a man for me. 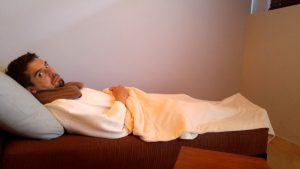 I’ve heard a lot people express a preference for one gender or the other when getting a massage. Yashy prefers a woman; and I think most guys prefer the same! Being a first time experience for me, and as someone who normally doesn’t even like to have my shoulders rubbed, I was a little apprehensive, but not so much about the gender of the masseuse. My two main concerns were the length of the message, which would be 80 minutes, and the potential level of discomfort, which I feared would only increase over the long duration of the massage. The treatment starts off quite peacefully, progressing through fire, earth, and water cleansing rituals, after which we were asked to lie face down on a massage table. I spent the entire experience with my eyes closed, and so the fact that it was a man giving the massage rarely crossed my mind.

I quickly learned that I carry a lot of tension. The masseuse started with the back of my legs, and my calves, in particular, felt like rocks being ground to a pulp. My feet are usually ticklish when touched, and sure enough, I had to hold back from squirming of the table. Once my legs were done, my back was next. This was the area on which I was hoping to gain some relief. Ever since the Little Man came along, I have been experiencing pain in my upper back. My doctor informed me that my back had become stronger than my chest, and I suspect that constantly lifting two children in and out of strollers, bathtubs, beds, and into airplane-like flying positions has taken a toll. My doctor had recommended massage therapy, amongst other treatments, but I was never too willing to get a massage. This is one of the main reasons I agreed to join Yashy.

The back massage was a mix of pleasure and pain. To exacerbate the pain, I had developed a nasty sunburn while playing with the Little Monkey at the beach the day before, but the massage oils made that less of a problem. However, like my calves, my back was full of tension and knots, and so the masseuse went to work on my very tight upper back area, giving me what everyone has assured me is ‘good pain’. As a lay grimacing, I began to focus more on relaxing my body, hoping that this would help to loosen the knots and tightness. This focus on relaxing did help a little, and I realized that getting a proper massage might in itself be a skill one has to acquire. To lie back and let the muscles rest seems to be something I need to work on as I counter the regular exercise I try to maintain. In the last few years, as I push towards 40, I am starting to realize why professional athletes almost always retire just short of 40. The body doesn’t recover as quickly, and a need for proper rest and recovery becomes evident.

Afterwards, I felt different, still a little sore in the calves and upper back, but somewhat revitalized and aware that I just did my body a favor. I learned that the body and mind need to find ways to relax. My concerns about the length did have some merit, but for the most part, the painful moments that occurred when the masseuse was working on a knot were followed by relaxing intervals that feel great.  Admittedly, partaking in an 80 minute massage is not something I’ll do again any time soon; I am still too restless to enjoy the treatment to its fullest, but I would recommend that, if you’re like me, and hesitant to submit yourself to a full muscle massage, that you sign up for the treatment someday. You may find that it’s exactly the type of afternoon you seek: an opportunity to clear your mind, relax your body, and feel refreshed. And if you know someone who enjoys the spa, there is no better gift you can offer. If, like me, you never know what to buy your Mom (or maybe even your Dad), an afternoon at the spa is a great choice and the perfect addition to an afternoon at an all-inclusive resort like Azul Fives. 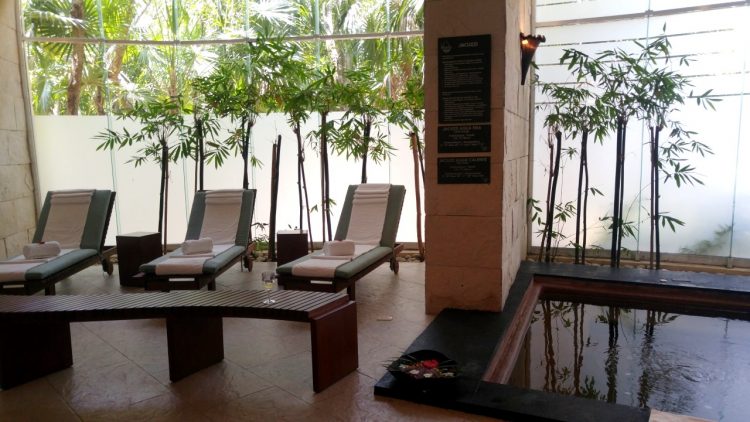 Yashy says : Having frequented many a spa over the years, the Vassa Spa was as relaxing and therapeutic as some of the best spots I’ve been to. Sounds of water flowing while looking out into the resort’s forest was very calming and something this city girl cherished. The masseuse was amazing and of course I fell into a deep snoring away slumber very quickly. All in all, the experience took us about two hours and dragging the hubs to try something new was a great way to experience an afternoon away from the kids. I know he’d  much prefer the ziplining we did in Vermont but it was my turn to pick a new activity!