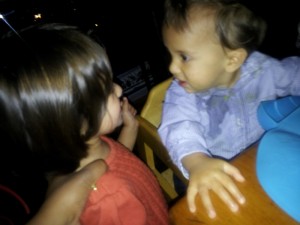 We love LOVE LOVE LOVE LOVE Mexican fare and we’re always looking for new spots to try out. We had friends visiting from Ireland and one of the things they miss there is Mexican cuisine and so a group of former colleagues met up for dinner one Wednesday evening and yes the hubs, Baby Boy and Little Monkey joined in on the dinner at  Fonda Lola. Fonda Lola is a small 8 table establishment and I knew it would be a tight squeeze in the restaurant (they also have a patio) so we left the strollers at home. I also left my camera and I do apologize for the blurry, oil smudged phone lens photos of the Fonda Lola menu.

Securing a table by the window will work in your favour with a toddler as they can watch the traffic and passerbys and not be in anyone’s way. They do have a high chair and the staff welcomed the kids with a smile. Co-owner Andres even popped by to ask if he could make something for the kids. Since we were a large group and going for the #MexicanFiesta tasting menu, I decided to have them sample off the main dishes and it worked out well for the most part. It’s a big casual fiesta here as if you were over at your friend’s place. The rustic washrooms down the stairs deserve a visit. The hubs and I even managed to do a diaper change there (you need two people for this!).

Our group of 16 plunged into the tasting menu ($30 per person) and while I didn’t get to try every single dish, I did manage to sample most of them. Little Monkey loved the Panela Poppers which had a bit of a Jalapeno bite to it. The cornmeal casing was probably her favourite part. The Trout Aguachile was the hub’s favourite as he is a big fan of ceviche. When the Candied Jalapeno Bacon came out with slivers of cheese, all eyes were on that dish. It disappeared fast and I really would have liked another as it was tough to share 😉 Speaking of sharing, Baby Boy was doing none of that once the Pescado del Dia came out. I felt bad for our table mates as he plunged into the fish sauteed in coconut oil (there was also a tequilla butter and Jalapeno but he avoided that part). 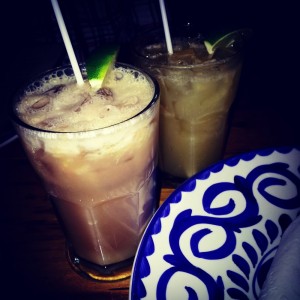 The Steak Tartare (and the hand painted plates) was by far my favourite and yes their guacamole was good. Of course no Mexican meal is complete without a margarita so I tried out their Kombucha Margarita which features a smoked Horchata but I wasn’t fully a fan. The Michelada was more up my thirsty alley and so that’s what I nursed for the rest of our meal until we finished the ever so famous Churros con Cajeta. No they weren’t shaped like penis’.

Is this my favourite Mexican joint in Toronto? Nopes… that search is still on. However if you’re looking for a spot on the Ossignton strip for a casual meal with a chilled cantina (or Fonda)-esqe vibe, with kids in tow this may be your spot. It’s great for group gatherings as well because of the intimate layout and chilled out vibe.