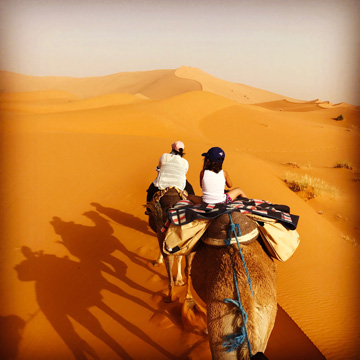 Riding a camel is a lot like taking the polar bear plunge on New Year’s Day. It’s a grueling activity done solely for a moment’s exhilaration (and for bragging rights, of course). I’ve now ridden a camel twice in my life. The first time occurred in Dubai and lasted for two minutes. I was the foreigner taking what was basically an amusement park ride. More recently, I rode a camel through the Sahara Desert for close to an hour. It’s the last time I will ride a camel. Of that I am sure.

For those of you who want to experience riding a camel, thus gaining the accompanying experience of telling others that you have ridden a camel while humble-bragging that it’s no big thing, I am here to offer the advice you haven’t requested. I doubt that you will actually enjoy your camel ride, but by following these 5 easy steps, you can ensure a successful camel riding adventure:

In addition to being one of the greatest films ever made, Lawrence of Arabia contains a feast of camel riding adventures. You will see camels run, camels rest, and camels prod through the dessert at a leisurely pace amidst by a thoroughly amazing adventure. I have seen the film about a dozen times. And as I was thumping through the dunes on my camel, my thighs burning and my desire to dismount rising, the score from Lawrence of Arabia kept playing in my head, spurring me towards the finish line. Having seen the film was a salve protecting me from going mad atop the beast. Once our camp was in sight, I had to restrain myself from yelling “Aqaba” at the top of my lungs.

Think about the all the times you saw someone riding a camel or horse. Many Toronto city dwellers will know horses as the plodding beasts that police inexplicably ride down city streets from time to time, leaving a path of horse dung a mile long. Others will have seen countless western films featuring horses sprint at top speeds while their riders steady a shotgun at a hapless target. At no point do any of the police or the actors wear shorts while riding. Having one’s legs brush against the side of a horse or camel is just unnecessary discomfort. Don’t do it. Take those shorts off, no matter how hot the desert sun. Even worse, if someone is on the camel with you, such as your three-year old son who is also wearing shorts, the skin-to-skin friction will drive the both of you crazy. The little man sporadically yelled “Stop. Touching. ME!” over the last ten minutes of the ride. Oddly enough neither Yashy nor our daughter had any issues (they were wearing long pants though) and Yashy even found it similar to a massage where the kinks in her lower back worked themselves out!

Prepare for the Mount

Getting onto a camel is a three-step process. The first step involves throwing one’s leg over the saddle and hopping on. It’s pretty easy. In step two, the camel lifts its hind legs and throws the rider forward. It’s like that moment on a roller coaster when you reach the top and then suddenly start to plunge. I felt like rag doll as the camel, 10 times my weight, shifted into position. Step three is not so bad. The camel gets onto it front legs and rises. This is the point where you will suddenly find yourself 6 feet over the ground. You’ll be exhilarated because you won’t yet know the pain of riding a camel for an extended period. Enjoy this moment!

You are going to want to get pictures. Otherwise, the pain you experience will be your one key takeaway from the camel ride. I was riding with a DSLR camera on my back but quickly realized that I wasn’t going to be able to use it much since I always had to keep one hand on The Little Man in front of me, who did not stop talking the whole time. His mind had gone into overdrive from the excitement. When using my cell phone to snap photos, I found it difficult to remove and replace the phone to my pocket. Luckily, my useless DSLR was contained within a very useful case, which I could use to hold my cellphone. From there, I was able to grab it with one hand whenever inspiration arose and managed to snap some great photos.

Ask your Guide to take a few Pictures

I assume if you are reading this that you have never ridden a camel, or are, presumably, not a regular camel rider. If that is the case, you are going to have a guide who will steer the camel. These guides will have done this many, many times, and as a result, know how to take some pretty good pictures. Our particular guide turned out to be a budding Steven Spielberg. He first asked for Yashy’s phone in order to take our photo and then seemed to be fumbling with it for far too long. Just as we were about to say something, we discovered that he had cued up music on his own phone and was holding it to the speaker on Yashy’s phone. He proceeded to sweep up and down and from side to side, grabbing us some pretty great footage (minus the music of course, since I wasn’t sure how to explain to him that it would be copyright infringement to use the music online). He also snapped a few great photos and may well be on his way to a career in filmmaking at the studios in nearby Oarzazette. 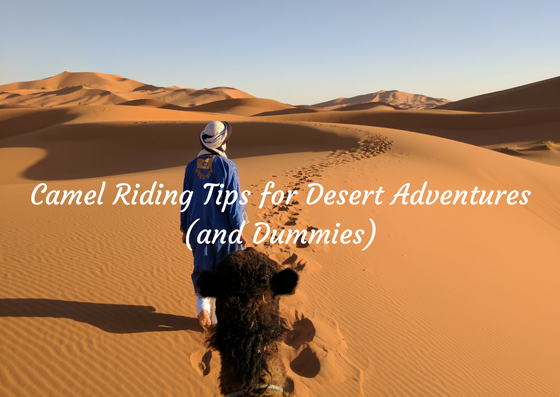 Bonus Tip – Do some Yoga after Dismounting

Both the Little Man and I were walking like John Wayne once we got off the camel, our legs stiff and sore from the hour-long journey. A deep Warrior pose would have felt great had I thought of it at the time. Alas, I was too busy reliving T.E. Lawrence’s desert adventures in my head. 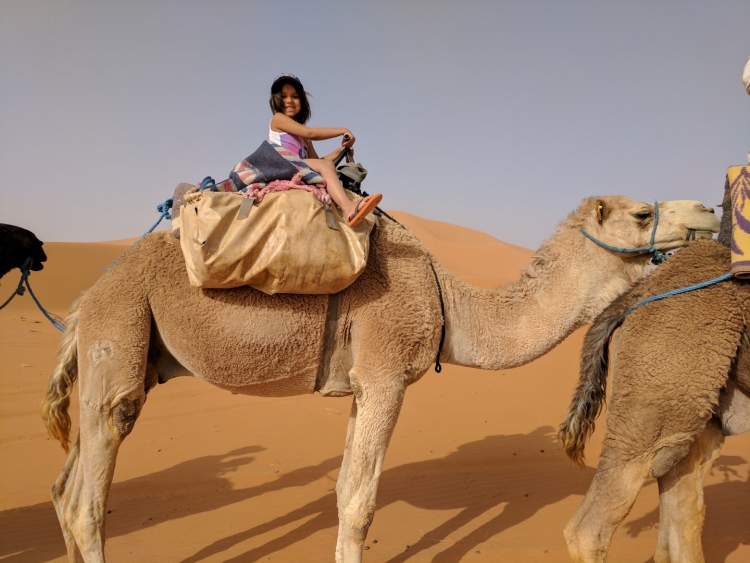 So as I mentioned, I’ve finished my last camel adventure. I am very happy that I did it but won’t be doing it again. The Little Man will probably forget the experience and so he’ll probably find himself in pain on the back of a camel someday. Our daughter, the Little Monkey, is 5 and after riding with Yashy on the way to camp, decided that she was ready to ride on her own heading back. We pulled her out of school for this five month trip though Europe and Africa. She may be missing out on a few reading lessons, but how many North American 5-year-olds can say that they rode their own camel through the Sahara Desert. 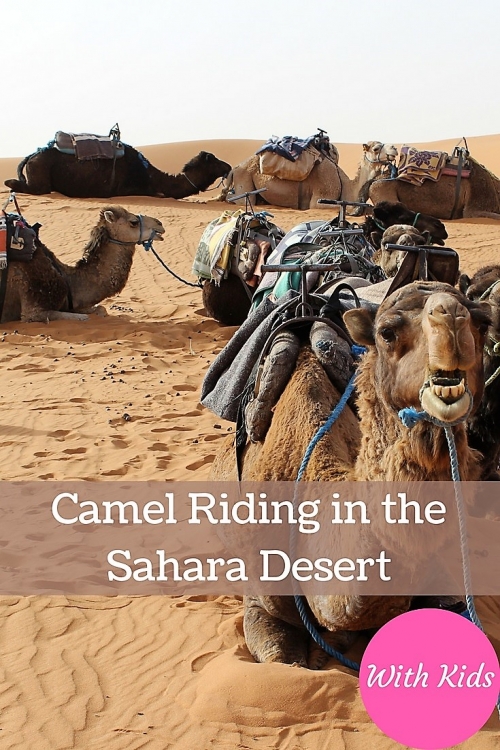