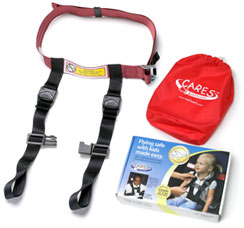 I received the CARES Child Aviation Restraint System (or harness as I like to call it) a while back but was only able to use it a couple weeks ago on our Los Angeles trip. Since we had all our gear waiting for us thanks to  City Stroller we had no car seat to accompany us on the plane. Little Monkey had her own seat on this journey and I knew that the adult seat belt alone wasn’t sufficient when it came to safety. Even in the smallest setting the strap was about two inches too big and she could have easily slid out. Luckily I had remembered the CARES harness! It is designed specifically for aviation use for children age 1 and older who weigh between 22 and 44 pounds. The Little Monkey sits at 2 years and 3 months and was exactly 22 pounds!

Weighing under a pound the CARES harness sat in my purse with no issues and I whisked it out as we tried to settle down. Admittedly the first leg of our flight we were all split up and the hubs wanted no part in the CARES installation. He saw no need for this restraining device – We have agreed to disagree on this matter. On the second leg from Chicago to Los Angeles I took the lead and asked the lovely lady behind the Little Monkey if she’d mind me installing the safety device and informed here that it won’t obstruct her view of the tv screen but that I would need her to put the tray down to install it. Sure she said. I must admit that asking neighbours is my only qualm – but hey it’s small price to pay for safety. CARES is the first and only harness type Aviation Child Safety Device to be certified by the Federal Aviation Administration (FAA) as an alternative to a car seat.

Installation was tricky the very first time ( you’d think I’d practice at home – but nopes! Who has time for that?). Once you know what you’re doing it is quick and the second time around I had it done in a minute- sadly we didn’t video tape it as we were rushed. The video below is a real life situ (as all my videos are) and you can see that I didn’t tighten the belt around the seat as much as I should have. This part is what I find the toughest as each airline seat is slightly different. I should have tightened the portion around the seat to ensure a secure fit and you will also notice that I wasn’t able to bring the harness down any further (the tray wouldn’t allow it) so it sat near the toddler’s ears versus the shoulders (which is the ideal spot). As she grows taller this device will grow with her and I bet it will be shoulder length on our next flight! 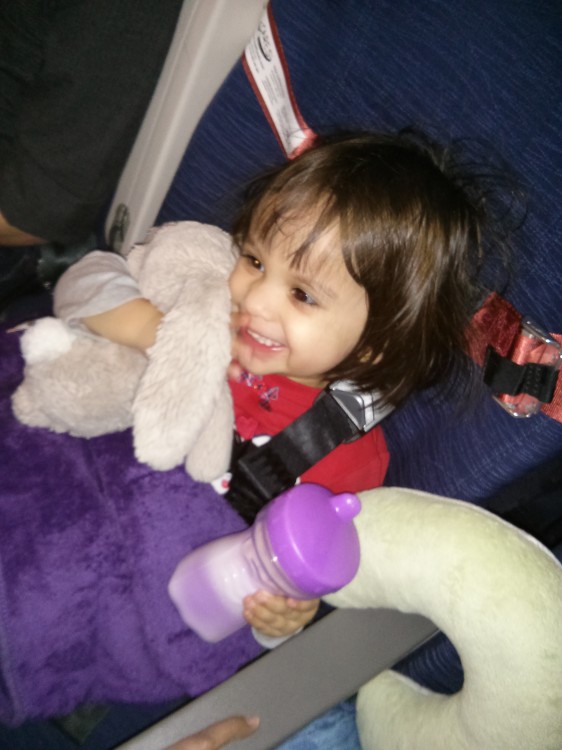 I liked that the straps are easy to adjust (just a push on the clip) but be warned that each airline has different seat widths so be prepared to adjust the widths if you’re flying with different carriers. Again not a big issue once you’re comfortable playing with the device. Ensure you place the metal portion of the buckle towards your seat so that you can easily tighten the belt should it become loose.

We’ve traveled with a car seat and I enjoyed the fact that it really contained the kid and that’s exactly what the CARES harness did with much less luggage space!! The Little Monkey was seated securely and towards the back of the seat which meant that there was no kicking the seat in front of us (added perk!). She didn’t ask to walk around but did at one point ask to stand up on the seat. It was a fairly harmless ask on a five hour flight and it was easy to do by flipping the airline seat belt while she stood up for two minutes (when the seat belt sign was off).

We had a total of four flights with two airline carriers on this trip to Los Angeles and we used the harness on two of those flights. I got a chance to monitor the difference between using it and not using it and we were lucky to have no turbulence on any of the flights. Had we had turbulence and she wasn’t wearing it… the hubs would have changed his mind on how awesome the CARES harness is! When she was wearing it she was securely seated and was able to sleep sitting up with no issues. Without the harness she was sliding off the seat and I had to prop her up at one point. Sure it may be easier to just slap the regular seat belt but it’s quite obvious that the belt alone is insufficient in case of an emergency or in case of severe turbulence. Priced around $75 the harness came highly recommended by friends and family who travel significantly and I couldn’t agree more. If you believe in the benefits of a car seat you probably should consider the CARES harness for flight travel. You can keep the conversation going @KidsFlySafe!