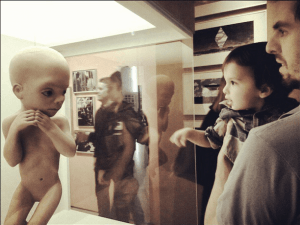 Discovering great movies is one of the activities Yashy and I most look forward to sharing with our kids as they grow older. As someone who will never forget the first time I saw E.T. and Elliot cross the Moon, I know that a lifetime of great movie moments await The Little Monkey and her partner in crime. Frankly, I am a little jealous that that have so much left to discover. The little ones are still too young for most of the classics, but I have been anxiously awaiting a big first step, taking our daughter to the theatre to see her first big screen movie. Believe me, I am going to know the exact moment when she is ready. While she does get to check out all of her cartoon favorites on our 50 inch TV at home, she’ll soon discover the joy of seeing a great film on a screen larger than our house, and I am hoping that, like I was, she’ll be hooked.

I discovered signs that The Little Monkey might become a movie fanatic like me when she was a little under 2 years old; it was the day when I put “Cinderella” on at her grandparents’ place and she sat and watched the whole thing without getting up once. She was enthralled, and soon began to request the film over and over, eventually even imitating the scene when Cinderella cries against a bench just as she is visited by her Fairy Godmother. She was hooked, and I was pretty happy that she had developed the attention span to sit through the whole movie. Since the Little Monkey watched Cinderella, our life has been all Disney Princesses, culminating with Let it Go. Ever heard of It?

Disclosure : We are part of the Netflix StreamTeam and receive special perks as part of our affiliation but as always, opinions are totally mine!

So what’s next? We probably aren’t going to be saying goodbye to any of the Disney Princesses any time soon, but from a movie watching standpoint, it’s a wonderful time to be growing up. Turning on Netflix is an activity that still baffles me. When I was in high-school, I started every Sunday morning with a trip to the video store (Okay, and a lot of Friday and Saturday nights too). For some films, I had to move to Halifax before I was able to finally rent them. Now, not a problem, and browsing through Netflix, I am discovering many of the movies that thrilled me when I kid. So if you are looking to break away from those Disney chains, here are a few films to start with your three and half or four year old : 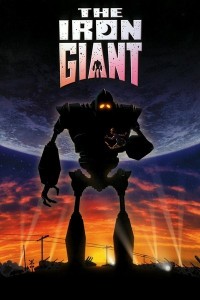 The Iron Giant – I was in my twenties when the “Iron Giant” was released in 1999, but this is the one animated movie I have seen as an adult that made me feel like a kid again. Maybe it’s the 1950s setting or the traditional animation techniques used at a time when “Toy Story” was the movie all of the studios were trying to emulate, but “The Iron Giant” felt warmly familiar when I first watched it. It’s a story of a boy and a robot who forge an endearing friendship and end up saving the world. What else do you need? Had I seen this as a boy, I probably would have watched it a hundred times. I am saving this one until the Little Man turns 3 and hope to someday see it on the big screen with the kids. This one is available in Netflix in Canada but not the US. Just sayin’. 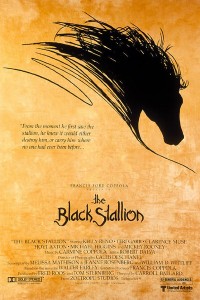 The Black Stallion – At some point, I’ll be trying to get the Little Monkey to expand her horizons into live action movies and think that the “Black Stallion” may be where I begin. One of the first movies I remember watching as a kid, this film has always stuck with me and I am surprised that more people don’t mention it when they recall their favorite kids’ movies. There is a shipwreck early in the film but aside from aside from that, the “Black Stallion” is more of a child friendly film than most of the Disney stories, and it’s a wonderful adventure movie about a friendship between a boy and the horse that saves him from the shipwreck. This one is on Netflix too. Don’t be surprised if you start watching it and suddenly remember seeing it as a kid. 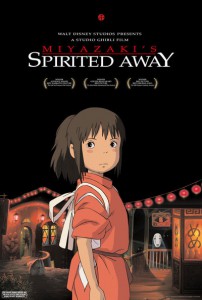 Spirited Away – Hayou Miyazaki has directed more than 2 dozen movies, and because I have seen so few of them, I’ll be able to enjoy many of them as a first time viewer along with the kids. “Spirited Away” is the film I’ll start with, and it is perhaps the greatest animated movie ever made, and is certainly one of the most imaginative. This Alice in Wonderland-like journey follows a 10 year-old girl as she wanders into enchanted woods while on a vacation with her parents. The film deals a lot with shape shifting and I can see how children would be fascinated by the changing landscape of the film’s setting and characters. There are currently no Miyazaki’s films on Netflix Canada right now but keep an eye out. You might be pleasantly surprised.

With so many movies on my list, I just hope the kids like going to the movies half as much as I do. How about you, any favourite movies from your childhood that you’ll soon be sharing with your kids?