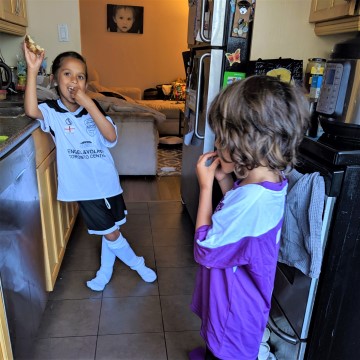 With the start of the new school year, I feel that most parents will agree with me that it’s almost like NEW YEAR! I gear up with aspirations for not only myself but also for the kids. We focus on many things when it comes to our kids but equipping them with the tools and resources to be responsible and independent has been a focus of mine since the very start. Why? Simply because it lessens the burden on Chris and I having to do EVERY LITTLE THING. Baby Boy turns 6 years old next month and Little Monkey turns 8 and so it’s a chance for us to teach them new skills and I thought I’d share some of the ways we’ve moved our tasks on to their plate. As much I loved the cute cuddly stages of infancy, once they turned 4 and 6 I came to appreciate the  opportunities I had to carve out more time for myself because they were a lot more independent. However, that independence didn’t just turn up. Nopes! We had to empower them by giving them the chance to make mistakes, learn from those mistakes and appreciate the power they now had by being able to do these tasks. Of course, they’re still pretty young and there’s plenty of ‘behind the scenes’ work that we still need to do in order for them to be able to do some of these tasks, but it’s a step in the right direction I believe.

Teaching Kids to Wake Up and Fend For Themselves | Morning Routine 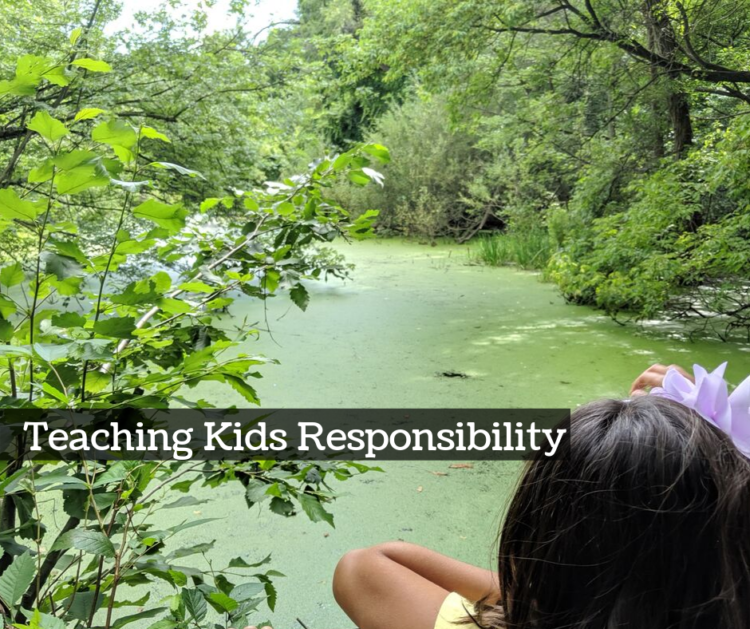 We used to whine that the kids would wake us up way too early and then we discovered that once they turned 4 and 6 years old, they were able to fend for themselves. We taught them that if they let us sleep in, they would be able to enjoy unlimited screen time until we got up and so a trend developed. We still stick to that rule on weekends so Chris and I can snooze into noon but now that school’s in session, I tried something new and it has been working! Since I’m up early to head to the gym for a 6 a.m. class and Chris prefers to sleep in, we taught the kids to wake up to their own alarm. So when I roll in at 7 a.m, they’re both at the dining table having breakfast.  I then proceed to remind them to get dressed. Now keep in mind that it’s still my responsibility to ensure that the old phone is charged, the alarm setting hasn’t been messed with and that it’s in their room on the bookshelf…each and every single week night. So on days I forget, I roll in to find them still asleep! Good thing is that they’re getting into the habit of waking up by themselves and getting breakfast on their own, taking off the pressure for me to rush back from the gym. 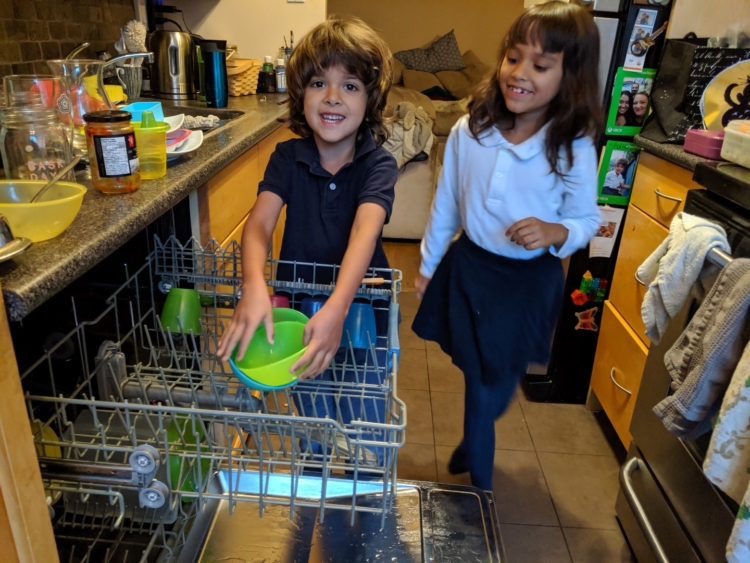 I feel like Chris and I have done a great job at divvying up the chores in our house as far as the two of us are concerned. He deals with the washroom (not often enough for my liking mind you), does the laundry and takes out the trash. I cook and clean the house (except for those bathrooms). He tends to load the dishwasher and I tend to empty it. That’s how it has been since the start of us living together. This past summer I started asking the kids to help out and we’ve now got into a routine where they are in charge of emptying the dishwasher. On alternate days they each take turns handling the dishwasher. Now of course I (or, occasionally Chris) still have to deal with the glassware and porcelain items but it has freed up some time for me. To ensure the kids stay motivated we’ve also got a rule that states “the person who empties the dishwasher gets to push the elevator buttons for the entire day and unlock the condo when we come home”. That’s the motivation they need to not argue and whine about this chore. I did try to get them to take the trash out (the chute is on our floor) but that was a bit of a fail so we put it back on Chris’ list. Hopefully we’ll be successful in handing that chore over in a couple months. You will notice that we’re not paying them for the chores. I don’t believe in that one because we all have to contribute towards keeping our house clean and so there’s no payment for that. Our kids do get paid for the work they do when they model for our shoots or work on campaigns, so they are still learning about the value of money (different topic for a different day!).

Snacks at Home and School Lunches | Get ’em Yourself 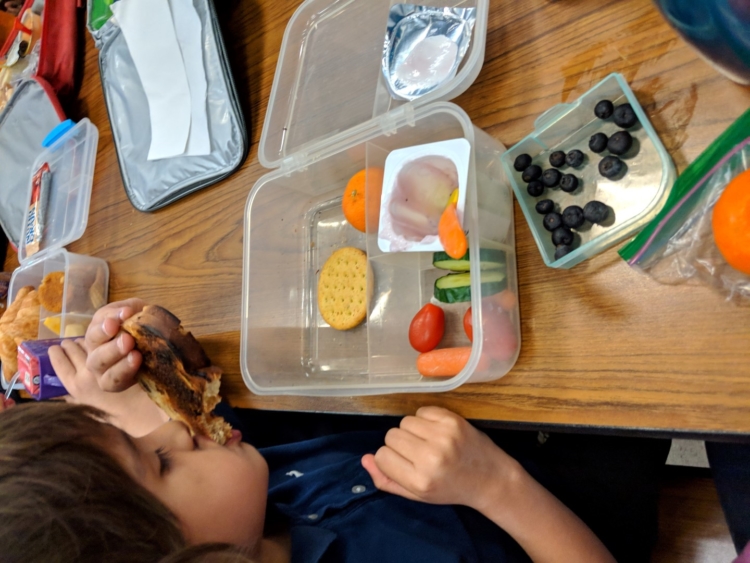 As the kids get older, so do their appetites and running to fix them a snack every half an hour can get tiring. We started off by keeping easily accessible cut fruit in the fridge but even 5 year old Baby Boy can now toast his own bagels and make his own peanut butter sandwiches. Sure, they leave crumbs and dirty butter knifes on the kitchen counters, but I don’t mind. I’ll deal with the clean up later! We’ve also kept a stool in the kitchen so the kids can pour their own water and there’s a low set of drawers with their plates and cups so they can reach everything easily. Ensuring accessibility and giving them the power to choose their own snacks (we keep candy for after dinner and only occasionally do they sneak some in during snack time) has definitely made my kitchen life easier. I do have to ensure that the milk bags are cut and in the jug or that the almond milk pack has the pull tab removed. If I forget, there’s plenty of whining I need deal with! I used to cut the food and allow them to pack their own lunchboxes but this year we took it a step further and now they have to pull things out from the fridge and choose what they’ll take (still abiding by the ‘at least 2 veggies and 2 fruits’ rule) and I only step in if I need to slice some cucumbers or cut up a fruit.

Choosing Outfits and Folding Laundry | All Yours! 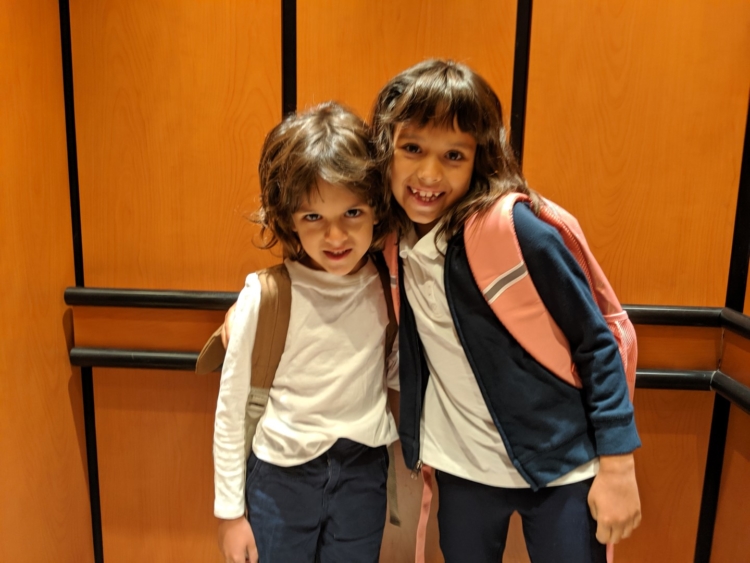 If I have to deal with one more meltdown over Little Monkey not liking her morning outfit, I will have my own meltdown! And it will be EPIC! The kids have been putting away their folded laundry for a couple years now but this year I had them pre-assemble their school uniforms and put them in a bin. This means that they choose which tops and bottoms go together and if it’s socks or tights… or pink underwear or green! In the morning they go into each of their bins and pull one pre-rolled outfit that has everything in a little ball. Now, of course Chris still has to do laundry and I divvy up the various pieces in piles for them to choose but the onus is on them to do that every other week and that way we’re set for 2 weeks of school. Now if only I didn’t have to nag for half a day to get them to do it! Mind you, this is very new to us so hopefully come December they’ll be in a routine! 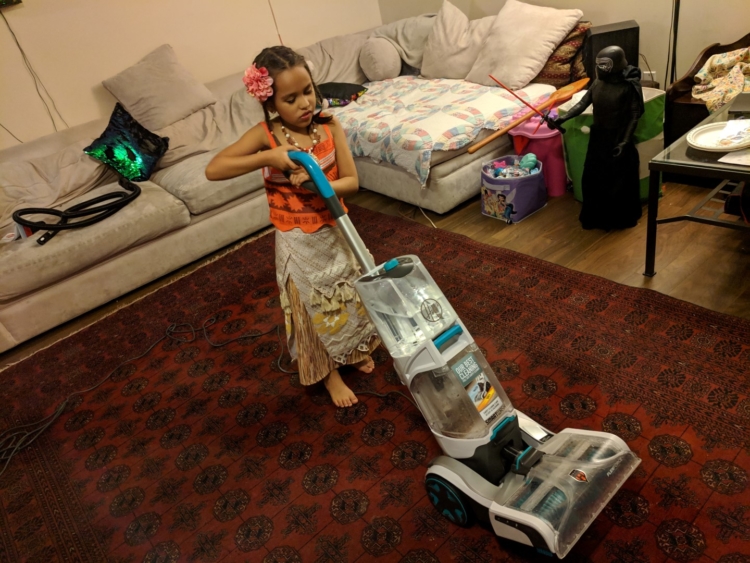 The tasks and responsibilities we have assigned are fairly simple but you’d be shocked by how much stress it relieves and how small chores can eat up your time. Not only do these tasks keep them busy, but it also frees up some time for me. Half of that time may quite easily be spent nagging them to do the said task, but they eventually get into a routine and it becomes a habit. Of course it’s easier for me to do some of the things, but if we don’t teach them now, how will they learn? They aren’t going to wake up as responsible adults one day out of the blue… nopes! We have to start the slow journey and keep adding different responsibilities as they grow older. I also use these tasks as a way to not only teach them responsibility, but also consequences. One night as I was crawling into bed I realized that we had all forgotten to pack lunch boxes. Old Yash would have jumped right out and fixed something… not this New Yash. I just went to bed and calmly reminded them of this in the morning. The kids we quick to finish up their breakfast and rushed to the kitchen to half-heartedly pack their lunch. We didn’t miss the bus but they missed out on some play time and they realized why they need to do tasks at certain times. You live, you learn… and as parents we can take small steps towards teaching those lessons. One thing I’m working hard on is remembering to praise loudly when they do an exceptional job and you know what, I’ve noticed that they compliment me now too. Yesterday it was ” wow! Mom you did a great job cutting those pineapples!”

I’d love to hear about tasks and chores your kids are doing or ways you’re teaching your kids to be responsible! Share them with us please! 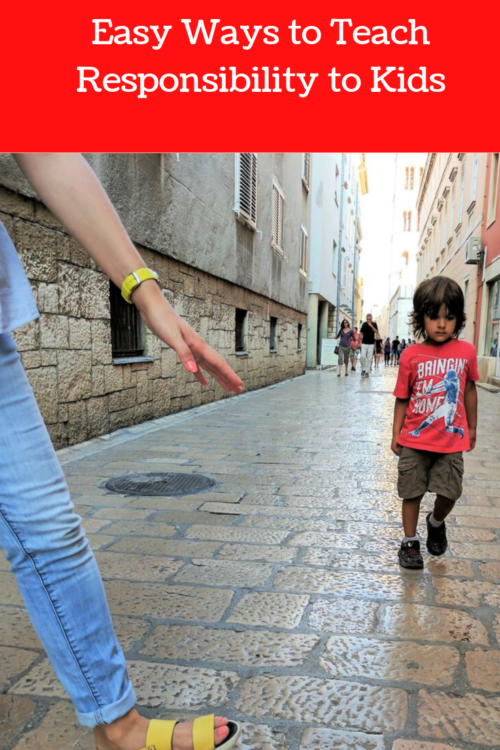