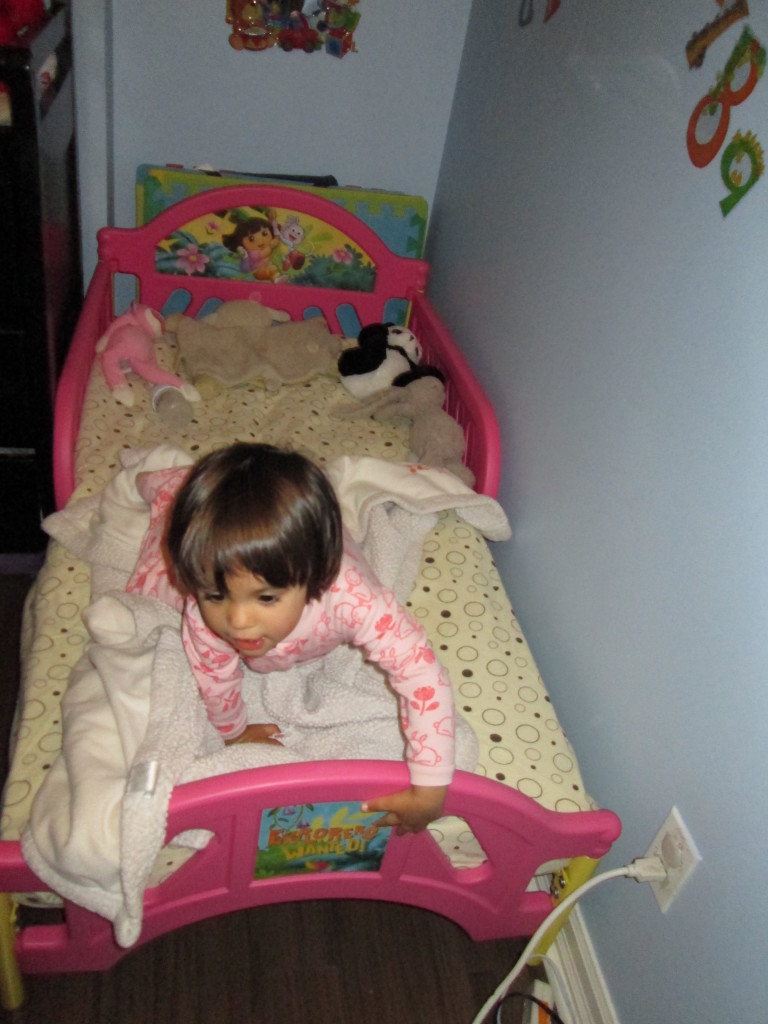 As our family prepares for the arrival of version 2.0 we’ve been introducing many changes into the Little Monkey’s life and transition from crib to toddler bed is one of those. Mind you not all transitions have been successful (and that’s okay – wait to hear all about potty training!!) and I am well aware that “they” recommend minimal changes happen right before the arrival of a sibling but somehow that contradicts with our needs. As I’m sure it does for many young families with kids a few years apart. Living in a small condo means that space is limited for us and we were hoping to use the mini crib for the new baby. Which then brought on the topic “what does a toddler sleep on?” I went to Twitter and got plenty of advice ranging from mattress on the floor to a full sized bed with rails. Ironically as I was doing my research in early September on what the best option for us would be, one Saturday the Little Monkey woke us up at an ungodly hour of 6 a.m. and did not want to stay in her crib. Instead of taking her to our bed I decided to lie with her on the futon bed in her room (visitors tend to share a room with the Little Monkey when they visit us – clearly they love it!). Well what do you know? From that day onward she wanted nothing to do with her crib and wanted to sleep on the futon for naps and bed time. This definitely took us by surprise and let’s just say we weren’t pleased by the fact that she was now mobile. Able to walk around by herself and even knock on the door to be let out! Her sleep patterns also took a change and she was waking up at 8 a.m. vs. 10 a.m. and had shorter naps. Could this all be part of the changes approaching the 2 year mark? Or was it the fact that she was now in a huge bed (with no guard rails mind you) and she wasn’t as snug as she was in the mini crib? We experimented with the large bed for two weeks and things didn’t change. She woke up early and was often cranky. A matress on the floor seemed a bit too primitive (and I’d have to clean the floor more often!!) Clearly we needed to try something new and so my search for a reasonably priced toddler bed began. I liked the idea that toddler beds were small and that they offered a comfortable transition from tiny crib to large bed, easing the process. However there’s so many choices out there and it can get overwhelming. From cartoon characters, to heights and support structures…. it took a week to narrow things down. I checked around the usual suspects for a toddler bed and really liked what I found at Walmart. Yes I know.. Walmart!! Their online site is done well so it was easy for us to see what we were getting and read through the reviews of those who had the bed. Parents dishing it out. Walmart carries a range of toddler beds in a variety of colours and cartoon characters which makes it fun for the little ones and best of all, the prices are very reasonable. Toss in some diaper deliveries whilst you’re at it, their prices usually can’t be beat!  So guess what we got? A DORA bed ofcourse! (have you entered to win tickets to see Dora Live this November?) One evening the Little Monkey and I returned from one of our play groups to find the hubs locked in her room … he had picked up the bed (which was delivered – gotta love online shopping!!) and had wanted to surprise the Little Monkey. Very cute. Watch the video to see what ensued!

We’ve tested the bed for a month now and she truly loves it. I was afraid it may not be sturdy given that it was under $70 but it’s perfect for her. Mind you… I would never sit on it but she jumps on it and talks to Dora and Boots as she falls asleep. A standard crib mattress fits the bed (not the mini crib mattresses though) and the bed came with side guard rails which was very practical. It has given her the independence to wake up and play with her toys before she starts her day and some nights she needs to unwind in the dark before climbing into bed. Which is fine by us! For us the transition to the toddler bed came easily and I think it really helped that it was a “fun” bed and experience over all. She got excited about it all and even a month later loves her bed. Moreover I know that I can easily replace those Dora Stickers if/when she gets a new favourite cartoon! Check out some other options we considered! 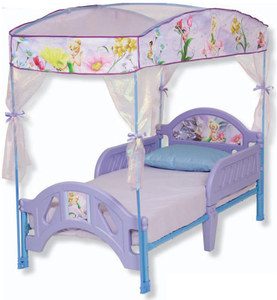 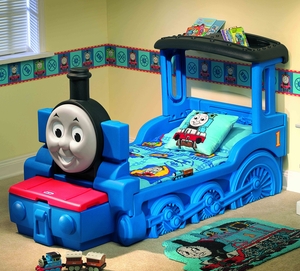