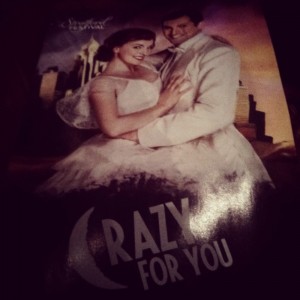 Crazy For You. Yup that sums this past weekend when the hubs and I sneaked away to celebrate our fifth wedding anniversary in Stratford, Ontario. Two days away from the kids and our very first time doing so! We had a blast, as did the kids with my parents! Stratford is a true cultural hub and we knew that this was our chance to experience theatre and music like never before (since having kids) and were delighted when we were invited to check out the Crazy For You production that’s currently delighting audiences.

Disclosure : We received complimentary tickets, but as always, opinions are totally mine! 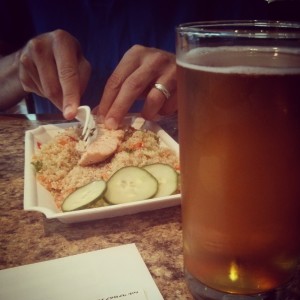 On arrival at the Stratford Festival Theatre we grabbed a quick snack and enjoyed a Steam Whistle prior to taking our seats. We knew it would be a good show but we didn’t expect to laugh as much as we did or to have the desire to go dancing at the end of the evening. “Who could ask for anything more?” From the very start this Gershwin musical will take you down memory lane as they pull good tune after good tune for a toe-tapping, knee slapping evening.

The plot is fairly simple : Guy wants to be in theatre but doesn’t get a break until he ends up in Nevada on business and falls in love. Between marvelous acting, a bit of slapstick and a whole bunch of dancing, the entire cast puts on an entertaining show. The audience gets drawn in by the charming lead, Bobby Child, and the strong willed leading lady, Polly Baker. Though it’s the witty one lines from the rest of the ensemble that will have you chuckling and grinning. 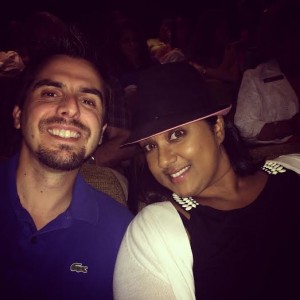 The stage, set and costumes are simple but done extremely well without distracting you from the acting, singing and dancing. We, along with the rest of the audience, were continuously laughing and applauding  throughout the evening and the standing ovation at the end was well deserved. Just when we thought it was all done we received another surprising treat when the cast came on stage for that last bow and put on an upbeat goodbye that had me and the hubs (and the rest of the audience) in the mood to go dancing. If I knew of a Hoe Down in Stratford that evening, I would have flocked there with my cowgirl hat on to show them how “I Got Rhythm!”

Kids six and older and encouraged to attend and I noticed that they have booster seats available ( always looking out for the kid friendly, what can I say?). There’s no bad seat in the house from what we could tell and there’s a seat for every budget. Crazy For You goes on till October 12 2014 and I definitely think catching a play or musical at the Festival Theatre is a must do when visiting Stratford. I’m just “Bidin‘ My Time” until we can sneak back to Stratford to catch some Shakespeare.