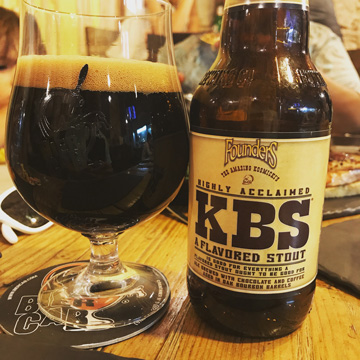 Barcelona is a city overflowing with options. Its restaurants offer a range of cuisines for all tastes and the city’s many landmarks include architectural masterpieces and the remnants of a very successful Olympic Games, but I secretly came for the beer. After spending three weeks in Morocco, where beer is a tasteless, yellow concoction foreigners overpay to drink, I arrived in Barcelona in search of greatness. When beer loving North Americans visit Europe, they are in for a different, often disappointing experience. Nowhere in Europe would one find the density of craft breweries now prevalent in most North American cities. In Barcelona, however, I found something better, an unparalleled selection of Lambic beers.

With only 5 days to explore the city and a list of activities that would stretch our endurance, I made sure to do some research before visiting Barcelona. On my map, I marked five potential destinations, and made sure to include Lambicus, the one place I knew I had to visit. Before arriving, I knew that regionally produced craft beers were available but that they would not dominate the tap lists. I was curious to see what I would find at typical bars. Usually, I was disappointed. Most places only offered beer from Spain’s big breweries, but that just made it more exciting to walk into a spot that featured craft beer. Here are two great beer stops we made in Barcelona.

Of the five craft beer places I had marked, BierCab happened to be the one we were closest to when we needed a beer on our second night in Barcelona. For that good fortune, I am thankful. With a food menu that included a range of very tasty burgers, plus some tapas style offerings, BierCab was the ideal place to grab a dinner with kids while sampling beer. The rotating tap list mainly included offerings from the US and other parts of Europe, but they also had a few Spanish options available. We ordered two sour ales to start, one aged with plums and the other with apricots. Both were from the US and were very good. However, the main reason to visit BeirCab is to order from its beer bible.

The bottle list contains several seasonally released beers that North Americans clamor for on a regular basis. At BeirCab, I seized the opportunity to enjoy my first Kentucky Breakfast Stout (KBS) from Founders Brewery, a beer released every Spring to much fanfare in the US. Founders is located in Grand Rapids, Michigan, little more than a 5 hour drive from Toronto, yet I had to fly across the Atlantic to finally find a bottle. The beer menu also contained bottles of Sam Adams Utopias, as well as three years of releases from 3 Floyds Brewery’s Dark Lord Series.

I’ve saved the best for last. Next door to BierCab is the BierCab Bottle Shop, where I found an incredible selection of American beer as well as four offerings from the Cantillon Brewery, Iris, Gueuze Bio, Kriek Bio, and Rosé De Gambrinus, all glorious beers that I have been slowly savouring over the past few weeks. I have never found Cantillon beers at a North American beer shop, though I have visited quite few where the owners have teasingly displayed the empty bottles on their shelves. The only time I am normally able to consume Cantillon beers is at the annually celebrated Zwanze Day. In Barcelona, it seems I can do so whenever I want. Speaking of Lambic beers, the next place we visited is a must stop for Belgian beer lovers…

Of all the beer shops I have stumbled into, only De Bier Tempel in Brussels has rivaled the selection of Lambic beers I found at Lambicus. The shop sold almost every Lambic beer I had ever heard of, plus a few more, and my mind went into overdrive as I browsed the shelves while sipping an incredible beer from Gueuzerie Tilquin. The shop had several beers from the Cantillon Brewery and 3 Fonteinen, perhaps the world’s two greatest producers of Lambic beer, as well as offerings from dozens of other producers. Had I a reliable means of transporting these beers back to Canada, I might have spent a month’s earnings in the shop.

While Lambicus almost exclusively specializes in Belgium brews, the staff did speak English and provided me with a few tips for finding locally produced craft beer, which is something I am always seeking when I visit new regions. The shop had a flyer left over from the Barcelona Beer Festival that had taken place during the last weekend in March, and it contained a very helpful craft beer map of Barcelona. Unlike most bars in Toronto, seeing craft beer served at a pub or restaurant is still rare in Barcelona, and so knowing exactly where to go is vital.

The staff was helpful in pointing me in the right direction, recommending Brew Pub Le Sec as a place that produces beer on site, as well as Catalluna, where I would find beer from the Catalonian region. Sadly, I had run out of time to explore Barcelona’s craft beer scene, but I have included a picture of the map below, which outlines the names and locations, plus provides a website when available, of the most popular craft beer destinations in Barcelona. If you visit any of these places, be sure to let me know about your experience.  I also discovered that Barcelona’s Zero Vuit microbrewery has a beer tasting and brewery tour. That will be on my agenda the next time I visit Barcelona. 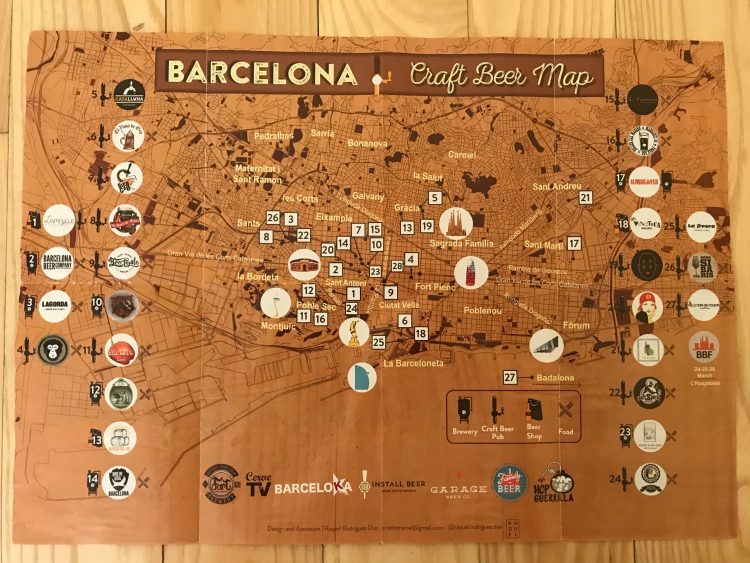 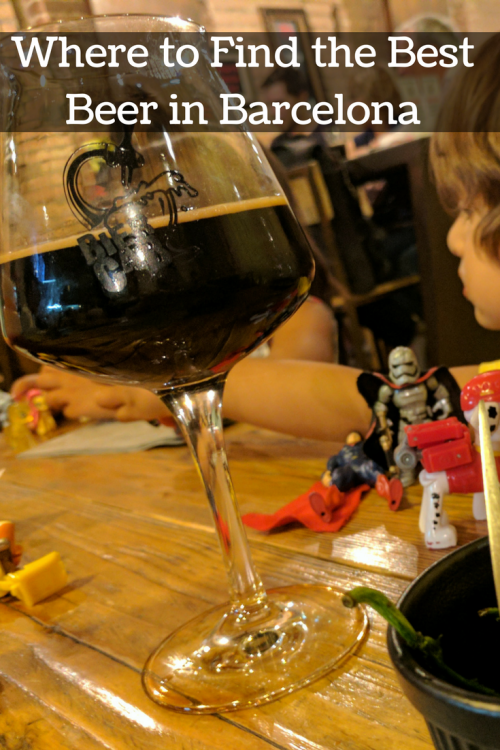