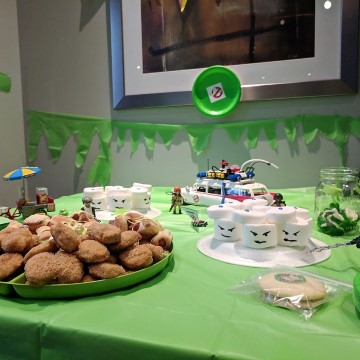 When Baby Boy requested a Ghostbusters themed birthday party, I didn’t realize how difficult it would be to find Ghostbusters party supplies and party decor! Compared to Little Monkey’s LOL Doll request, his Ghostbusters one was very challenging but oh so rewarding when it all came together! This past weekend we threw a combined birthday party for the kids and hosted about 65 people (adults and kids) but manged to do it on a budget. At least, I think spending just under $1000 for a group that size, is within budget. We rented our friend’s condo party room and mixed in some DIY projects (with numerous runs to the dollar store) and outsourced some tasks as well. When things finally fell into place, the Ghostbusters party ideas looked way better than the LOL Doll one (though the kids, didn’t notice it, luckily!). If you’re thinking of hosting a Ghostbusters party and looking for some fun and easy ideas, hopefully we can inspire you. But first, a big THANK YOU to all our family and friends for helping us bring this day to life – Many people help us as we prepped for this party and even more lent a hand on the evening, ensuring that food was replenished, kids were looked after and clean up happened…in addition to helping us celebrate and making Baby Boy and Little Monkey feel special. 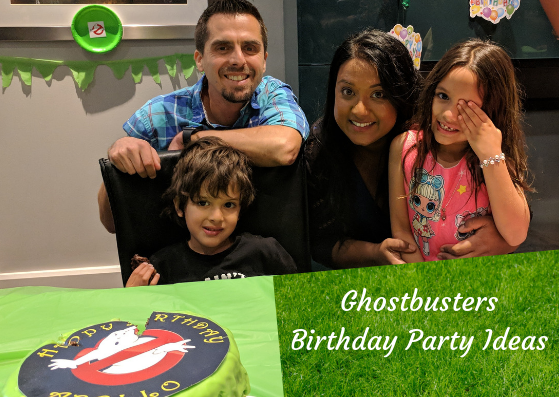 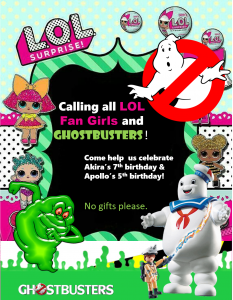 The party invite was easy enough as I use Evite each year and have our guest list built in. All I had to do was design the image using images I found on Google and upload it to the site before adding some new friends we had made this year. While Little Monkey was successful in finding her friends’ contact details, sadly Baby Boy was not. Every handwritten note I sent to school was apparently torn by the two boys he wanted to invite. Fortunately we know enough kids so he didn’t miss the school kids too much. Since this was a joint birthday party I mixed in the LOL Dolls with the Ghostbusters but of course you would just want to use the Ghostbusters images for your party invite. 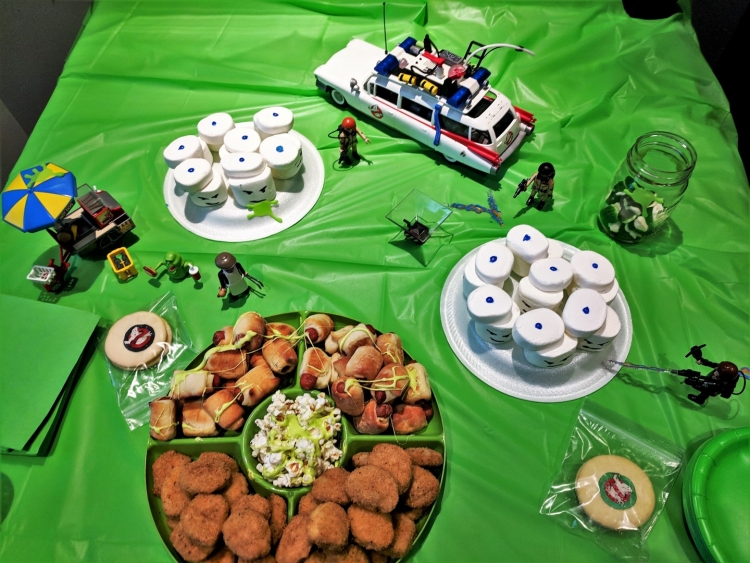 This is one I really struggled with. I spent hours looking online for plate and cups that would have Ghostbusters characters but there were none to be found. I did however find inspiration to buy green table covers from the dollar store which I cut up to look like slime. I also printed out images of Ghostbusters characters and then stuck them on balloons and randomly on walls. However, the showstopper (besides the cake) were the amazing Ghostbusters playsets Playmobil sent us. It’s safe to say that every kid loved the Ghostbusters Ecto-1 which not only came with slime and flashing lights (and sound), but also with Winston Zeddemore and Janine Melnitz. Placing this by the food table may not have been the smartest idea but, it did ensure that all the candy and treats were eaten! I also used the Slimer with a Hotdog Stand on the food table (I served mini hot dogs too) to bring it all together. It was all rather simple but came together nicely with the lime green plates and napkins. I totally lucked out with the Playmobil sets because without those, the table would have been quite empty and more like St. Patrick’s Day than Ghostbusters themed!

I realized quickly that I could make any dish I wanted because all I had to do was mix in some green “slime” and we were on theme! From popcorn to chicken nuggets and mini hot dogs, we threw it all on the kids table before drizzling the slime mixture which was basically melted marshmallow with green food dye. I also bought green jelly beans and gummies which were placed in jars (kids dug into those pretty early on) but my favourite thing to make were the Stay Puft Marshmallows. 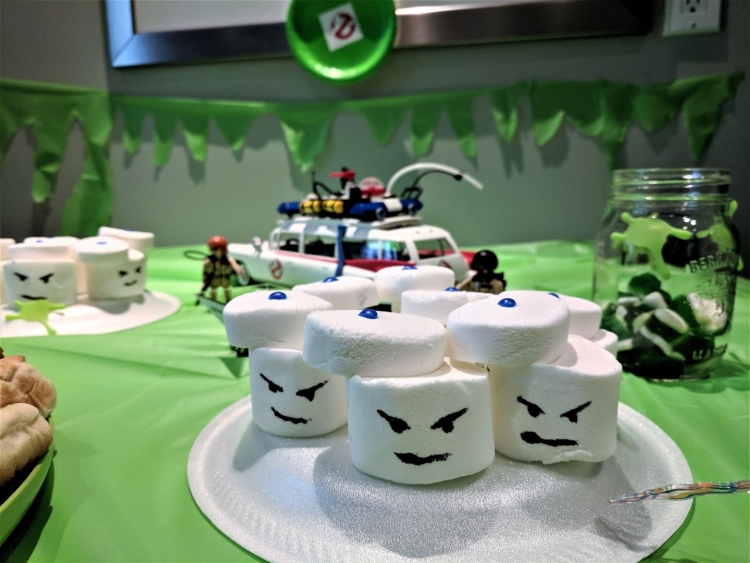 All I did was buy extra large marshmallows and cut the top off so I could angle it as a hat before taking black and blue food dye/icing tubes to draw on the designs. Many parents assumed I had used a sharpie for the eyes and didn’t allow their kids to eat them until I told them it was all edible! Something I had to keep repeating with the cake and party favours, as you will soon see!  These guys were super easy to make and took me less than 10 minutes in total. I should probably mention that my mom made Sri Lankan rolls and cutlets and that we also catered Hakka Chinese for the adults and put those on the side away from the kids’ table. As usual, despite ordering food for 30 people, a week later, I’m still eating the Hakka Chinese leftovers! 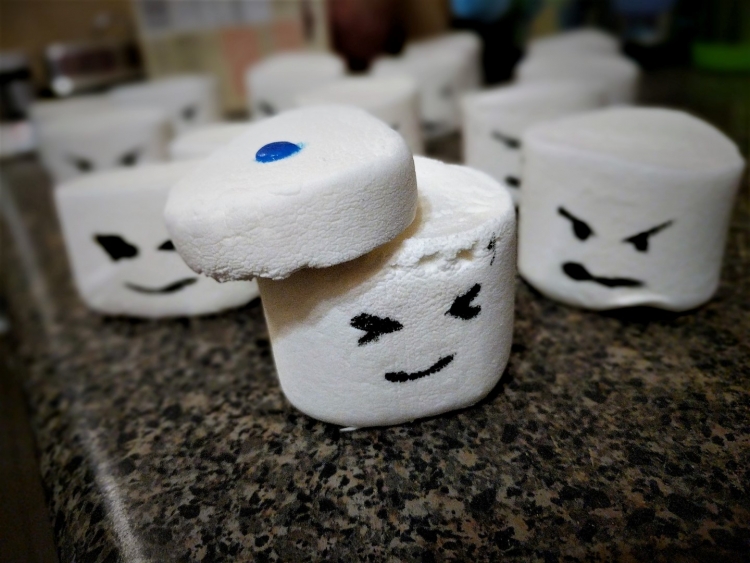 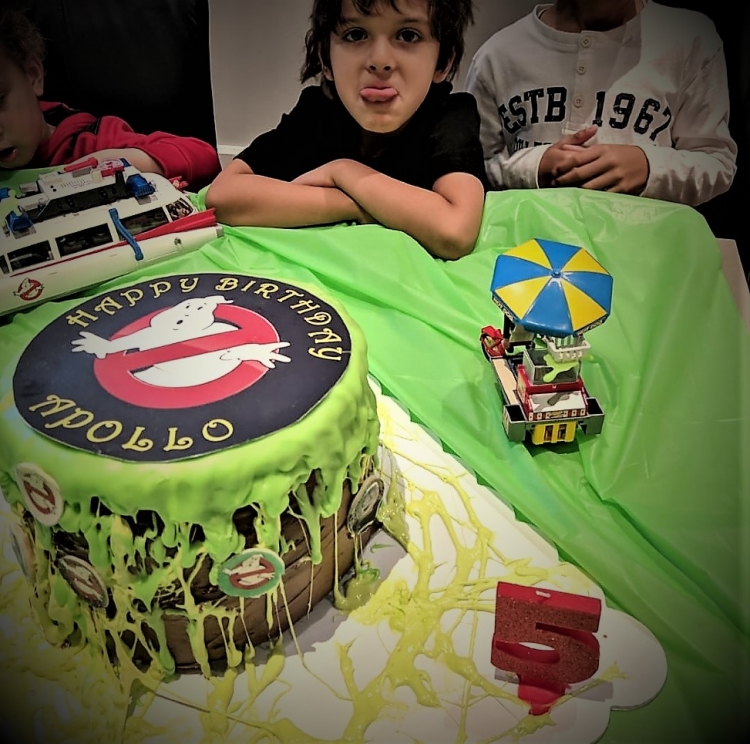 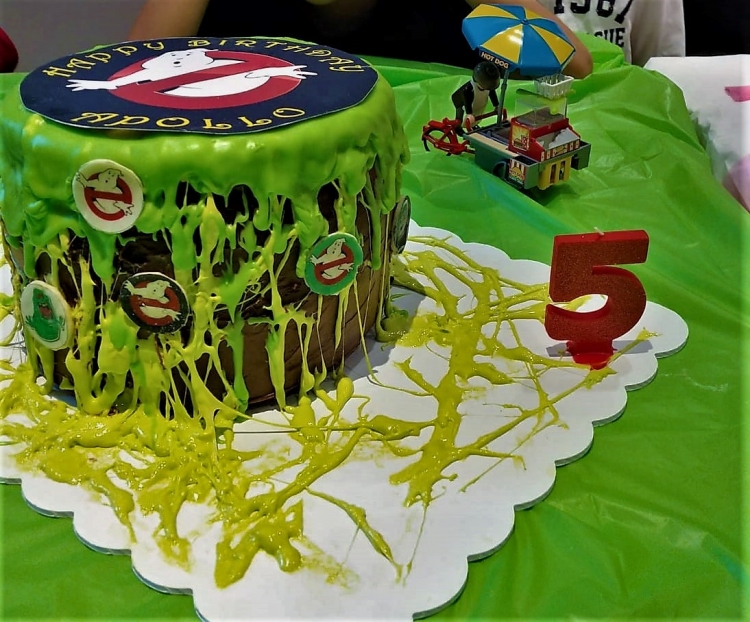 I cannot take any credit for the cake as my mom made this but I can tell you where to buy the edible rice paper decals! I discovered this eBay store about 5 years ago and have been ordering them each year to suit our theme. They didn’t have any Ghostbusters ones but when I sent an image, they made it happen and it was shipped from the UK within the week! Yes parents, your kids can eat those paper designs! 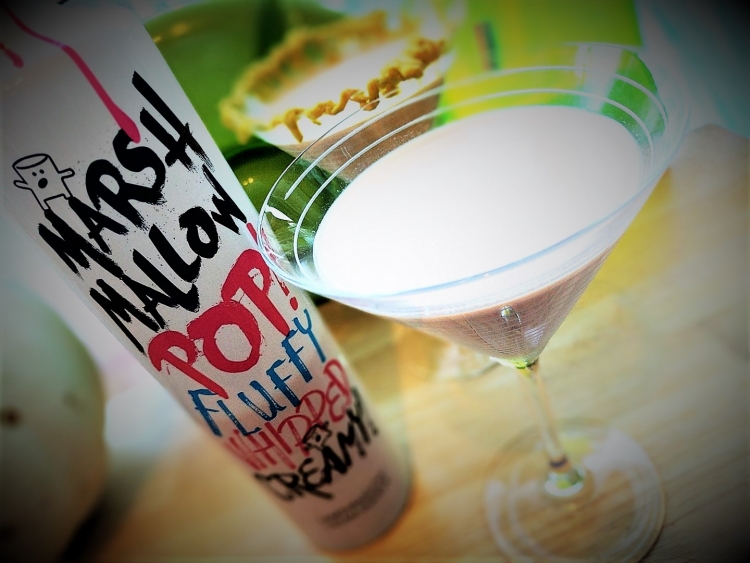 Kids got juice boxes and I told them it was slime juice but I had originally planned on making a batch of green lemonade and serving them in mason jars. Luckily I quickly remembered that there’d be way too much washing and spillage involved with that idea! Instead, I focused my efforts on a Ghostbusters themed cocktail for the adults. Since our party was technically from 3 to 6 p.m. (we went well past that because my kid free friends popped by after and we even ended up moving the party to our place until 2. a.m!), I chose a coffee based cocktail for a perfect mid afternoon pick me up. A friend of mine sent over a couple bottles of this marshmallow liqueur and it reminded me of Stay Puft.

Pour 3 oz of coffee (cold brew works or a freshly made drip batch will do) and 2 oz of Marshmallow Pop Cream Liqueur in an ice filled shaker and give it a good shake. Pour into a martini glass and serve. The more you shake, the frothier it’ll get. Feel free to rim the glass with some green dyed (food colouring) whipped cream to make it even more decadent! I’m going to try baking with this Marshmallow Pop next!

Can’t have a birthday party without some fun and games, right? In the past the kids weren’t into games so this year I decided to do a mix of things. I set up an activity station featuring a few Ghostbusters crosswords, Ghostbusters mazes and Ghostbusters colouring sheets which were all free downloads I found online. I also printed a large Stay Puft and was ready for a session of “pin the hat on Puft” but the kids were running around too much for me to bother with it, so that never happened!

I hate loot bags just as much as my friend Renee. This is why each year we try to give an edible giveaway/party favour/loot bag. This year, it was a mix of a DIY project meets store bought convenience. The Alfajores cookies from Aroma Espresso have been one of my favourite indulgences and since they offer catering services, I received  50 cookies from them (thank you to our friends from Aroma Espresso!) which I then pasted on the edible rice paper decals to. Yes, the same ones I had ordered off eBay – yes parents, your kids can eat everything on this cookie! I then put the Ghostbusters Alfajores into ziplock bags. The kids helped me with the task and I know that many parents were happy to steal the treat from their kids! One thing I will mention is that if you plan to order Alfajores, remember that they are baked fresh and that they are delicate. Ensure you transport them carefully and know that a couple will break along the way. Those “damaged” ones are your reward for all the hard work you put in. At least that’s what I told myself when I ate 3 while making the favours and then 4 more at 2 a.m. post party! Shh! No judgement!

The day was long and exhausting but we all had fun. For me, these birthday parties are as much about us as they are about the kids. This is why I ensure that adults and kids can all be entertained at our annual birthday party. It’s also the reason why I like to host our own party and not have a venue handle it! It’s more work but it’s also more rewarding. So cheers to Chris and I… we’ve survived 7 years of parenting, 5 of those have been with two kids to run after! 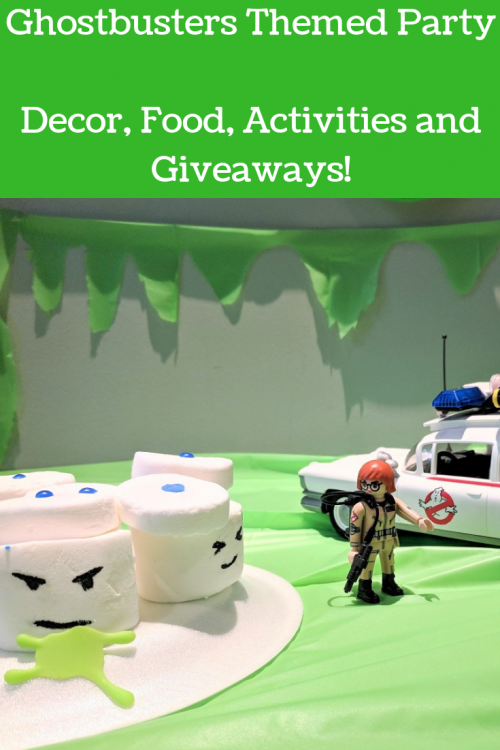