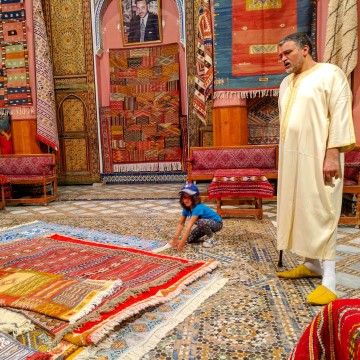 Fes was the first major Moroccan city we visited. Unsure of what to expect, we hopped a train in Tangiers for what turned out to be a 6 hour journey to Fes. Our family would be staying in a GuestToGuest home located just inside the walls of the Fes Medina, one of the largest car-free urban areas in the world. The visit would provide us with some great memories. Being a place very different from the lifestyle to which we are accustomed in Canada, we would each see the city and our encounters with new eyes. Chris was the worried one, concerned with the potentials hardships of exploring a Moroccan city with two small kids, while Yashy was ready to go with the flow and deal with problems as they arose.

In this two part article, Chris and Yashy each relate how their experience in Fes, one of the most memorable cities they have visited together. Continue reading to see Fes through Chris’ eyes, or take a look at Yashy’s view.

The Dad’s Impressions from Fes

The main thing I noticed about Fes was that everybody seemed to be smiling at us. Many of those smiles belonged to salespeople, who saw foreign money and the offered goods at inflated prices in the hopes of making a sale. Smiles like these are prevalent in every corner of the world, from board meetings to roadside stalls. In Fez, the smiles I enjoyed were those of the city’s proud residents, eager to share the wonders of their unique city. Those smiles leave an indelible impression, making Fes a joy to experience.

Fes was once the most populous city in the world, centuries ago. Now, it may be the one of the world’s most charming areas. Its medina, a large section of the city that is off limits to cars, is a sort of medieval Walmart, where I suspect that I could have found anything, perhaps even the fountain of youth. Walking through its countless stalls and alleys, I felt welcome, growing increasingly fascinated with its sights. At one stall, a chicken might rest in a cage, moments from becoming the freshest meat available in the market. Next door, a selection of natural oils and perfumes provide visitors with the ultimate opportunity to buy ‘organic’. 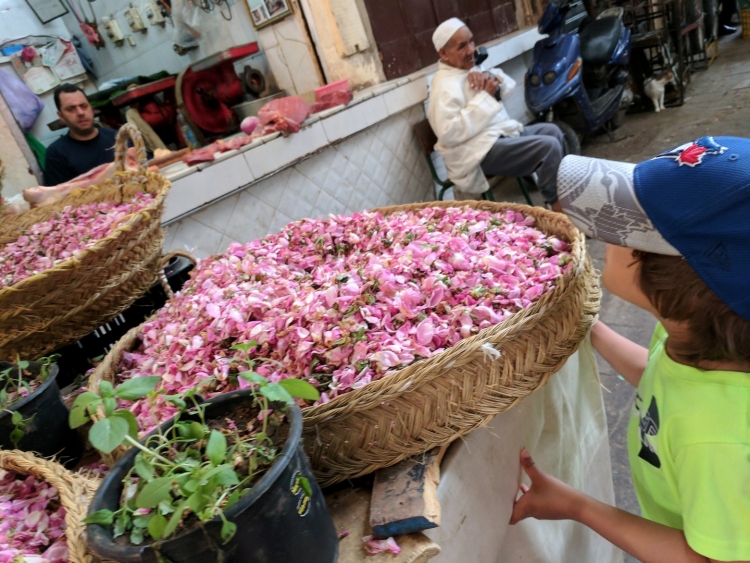 Upon first entering the medina, shortly after 7 pm one evening, I felt intimidated. The sun was setting and our family was looking for a market to pick up a few dinner items. We passed a shop selling drinks and household goods, including eggs and bread, but decided to keep exploring in the hope of finding something more substantial. After rounding a few corners, I felt a sort of claustrophobia. Unwilling to get lost in the medina so quickly, we turned back, bought a few items and had noodles and eggs for dinner.

The next day, we hired a guide. On our train ride from Tangiers to Fes, a friendly fellow sat down next to us in our compartment just as we were pulling out of the station. He asked where we were from and upon discovering that we were Canadian, informed us that his sister is married to a Canadian and now lives in Seattle. It took a few moments, but I soon noticed that we was even wearing a hat embroidered with the word Canada. He began to tell us all about Fes, where he was from, and gave us tips on places to visit while we were there.

We asked about transportation from the train station, his cue to pull out a cell phone and call his contact at the office of tourism, who indicated that they would send a van, something we really needed given our two large suitcase and stroller. 20 Dirhams he said it would cost, and then he recommended also taking advantage of the ‘free’ tour guides the office provides to visitors. It’s free, he said, because the office pays the guides a salary, but indicated that we should tip him 50 to 100 Dirhams for showing us around. He even put us on the phone with the guide, who spoke English and confirmed the taxi pickup. He then arranged to meet us the next day for the tour.

Once everything was arranged, our new friend then got up to bid us goodbye. His stop was next he said. It was the first stop the train would make, little more than 15 minutes outside of the station. It was then that I began to suspect that this was our introduction to the workings of Fes. A kind individual, who spoke English and had a sister in America, provided us with all the details we needed and even arranged a taxi and a tour. Our good fortune seemed too good to be true, which of course, it was.

We realized that a network of salespeople had identified us and nudged us in their direction. That pickup at the train station, which was great, since the van was large and comfortable, was not 20 dirhams. The cost was 100. The next day, when our free, ‘official’ guide showed up, we immediately asked the cost and discovered that it would be 200 dirhams for a half-day tour. That’s about $20 USD, so we agreed, suspecting it was high but still a good value for us. We complained about the cost of the taxi and our guide said it was meant to be free and that his driver told him that we had tipped him the 100 dirhams. Acting incredulous, he told us that he would not be using that driver again. I wonder if he knew that we had stopped believing anything he said.

We took the tour anyway. It felt like the right move to have someone guide us through the medina, which we soon discovered to be even more of a labyrinth than we suspected. Our guide told us a little about the history of the city, but his dialogue lacked the charm we have enjoyed during previous walking tours. With his direction, we made our way through stall after stall before stopping to enjoy some fava bean soup, which our guide had been promising all morning. 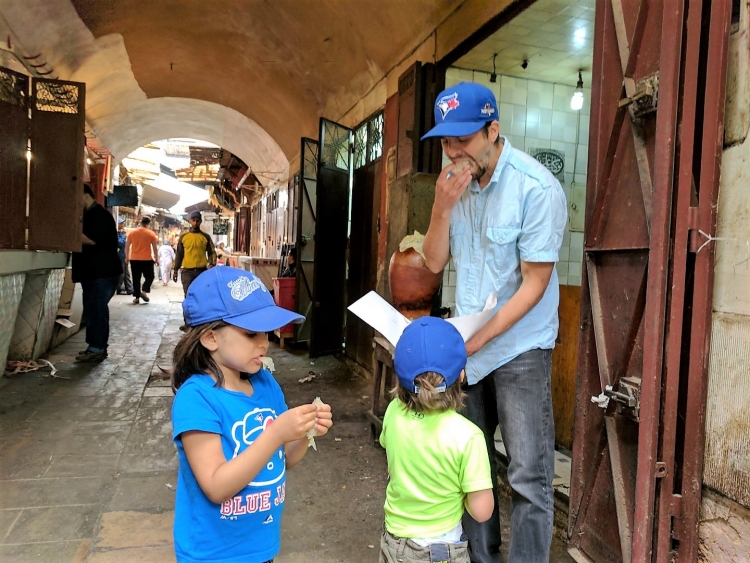 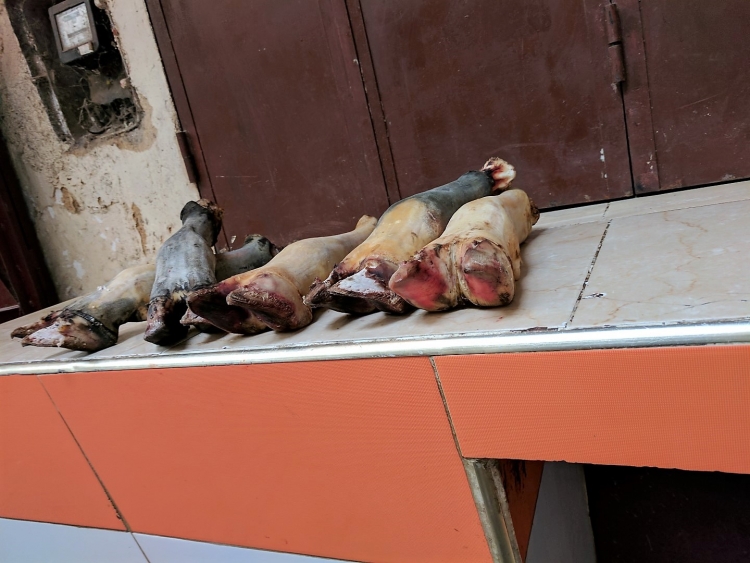 He led us into a beautiful three-floor building where we could see right to the ceiling when positioned in the central area of the structure. This is the most noticeable feature of a riad, the style of building that populates the median. The walls in this riad were lined with beautiful handmade rugs and we soon realized we were about to receive a sales pitch. After politely sitting through the unraveling of dozens of the truly amazing rugs, then refusing the salesman’s overtures to buy one, we were met with a disappointed face but well wishes. Our guide then arranged for us to have the soup on one of the upper levels, which was quite delicious. 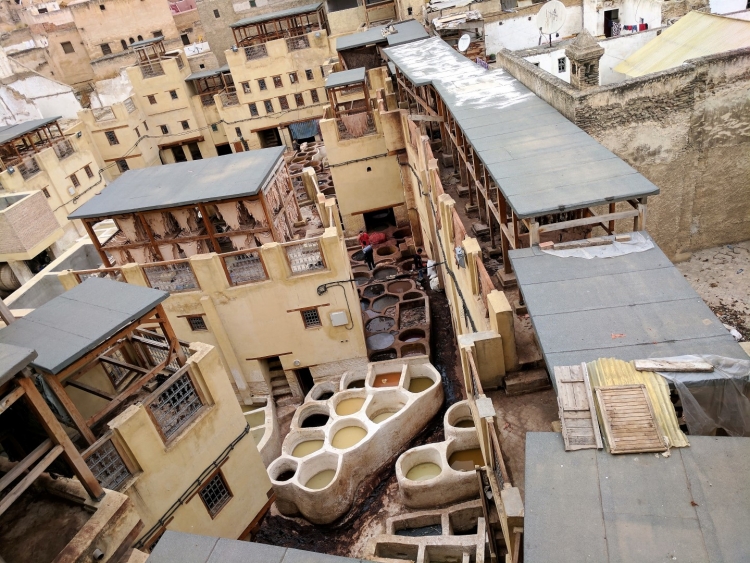 We next made our way to the tannery, where we were given mint leaves to hold to our noses due to the smell. The odor wasn’t too bad and we received some interesting details on the process, including the fact that pigeon droppings are used to disinfect the hides because of their ammonia content. Of course, we were also paraded through a shop of leather goods, only this time the hosts did not seem as upset when we left empty handed.

Because it was Friday and prayers had begin at 1 pm, we had to peremptorily end our tour because all of the shops were shuddering for the day, but we felt we had received a nice intro to the medina. The next day, now more confident in our ability to navigate the maze, we visited Bab Bou Jeloud (The Blue Gate), which was close to our GuestToGuest home. The gate is a sort of entry point to the medina, separating the old section of the city from the new. While the medina had been relatively quiet during out first day, we experienced bustling crowds during our Saturday visit. On our own, we were happy to be able to pace ourselves and didn’t mind getting a little lost. The sights captivated the kids. At one of the initial stalls we saw, bees engulfed the honeycombs the vendor had for sale. Animals were parked at various sections of the street, including donkeys, and we found the occasional quiet alley where the kids could run at top speed through past the homes of those living inside the medina. 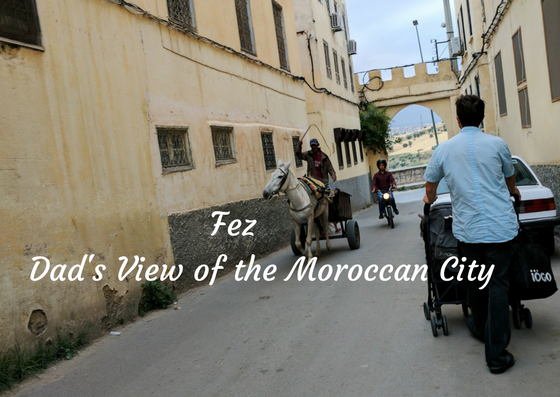 Throughout the day, I became more and more acclimated to our surroundings. By the time we finished a late dinner at the amazing Riad Rcef, I managed to guide our family back to our place without relying on my cell phone. That claustrophobia I had felt two nights before had dissipated and I felt a tinge of sorrow that we would be moving on from Fes. The overwhelming amount of sights we encountered in the medina was but a small sampling of its charms. 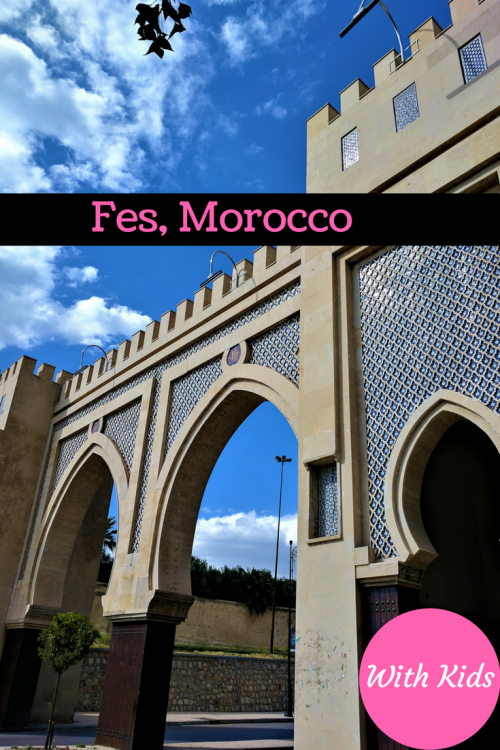