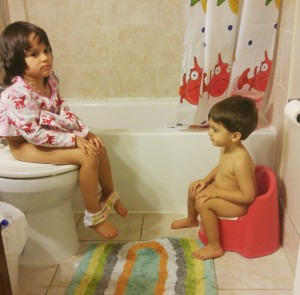 I still remember the potty training struggles with Little Monkey and had no plans on embarking on that journey with Baby Boy until the 2.5  year mark so you can imagine my surprise when I caught him sitting on the portable potty! This toddler is potty training himself!!! I have been dreading the potty training process and had heard that it’s harder with boys that girls – but I’m starting to learn that everything is just “different”, there isn’t so much a boys vs. girls thing at play.

The first time it happened was right before his 2nd birthday and I ignored it as a one time event but it has been three months and we’re catching his potty trips more frequently. Little Monkey is fully trained (minus two accidents at school) and I think Baby Boy is trying to mimick her. Every time she goes in, he does the same and they sit across from each other doing their business. I’m convinced Baby Boy can poop on demand. And poop often!

The following situations happen more frequently than I’d like to admit and I thought I’d share them in case someone else was going through the similar process! 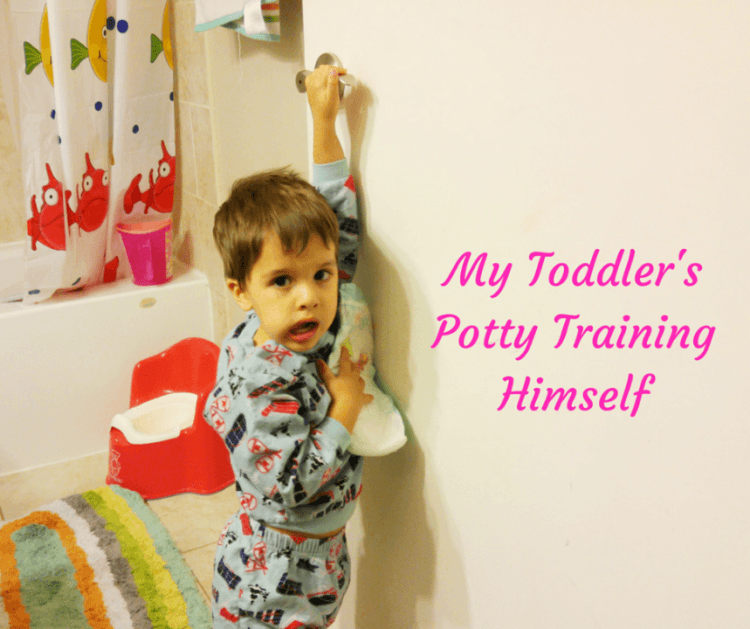 He still wears diapers 24-7 and we’ve had major diaper fiascoes to clean up after but I think it’s a wake-up call for us to start the potty training journey seriously. Guess we can’t ignore his signs and messy actions (even though I SO want to). I’m so not ready to begin the process but we do have the all the supplies so I guess I should get off my lazy butt! Diaper free household does sound blissful…even though I know it’s a long and messy journey to get there.

Anyone else encountered this scenario where the kid is potty training himself?