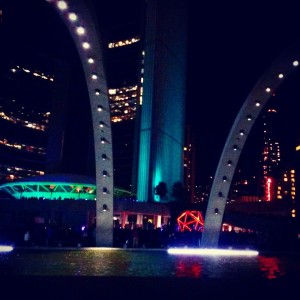 Nuit Blanche with kids may sound like a crazy idea, but I’m here to tell you that it’s absolutely fine. Fun even! After last year’s shenanigans and debauchery displayed on the streets and the confrontation about having young kids out that late, I was a bit hesitant to venture outdoors for the late night art celebration, but we made it out and glad we did.

Nuit Blanche is a 12-hour event with a mandate to make contemporary art accessible to the public, while inspiring dialogue and engaging the public to examine its significance and impact on public space. In 2006, Toronto was the first North American city to fully replicate the Paris model, and has inspired similar celebrations throughout North America. This year Toronto celebrated our 9th year and it was most definitely bigger than ever. I was a bit dismayed that the zones moved away from our immediate neighbourhood, which made it a bit challenging to experience as much as I would have liked to, but I guess spreading it around made it less crowded, which is a good thing. 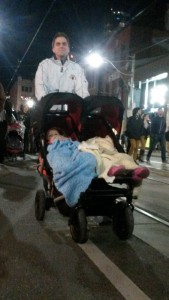 This year’s Nuit Blanche in Toronto was fairly civilized and everyone seemed to be enjoying themselves. Quite a few families were spotted during our exploration, including strollers and babes in arms. The event starts at 7 p.m. which means that you can step out for a couple hours before kids get super cranky. I wasn’t sure how Baby Boy would do, but he enjoyed every single bit and Little Monkey napped during the entire outing. The opposite of what we expected!

We didn’t see nearly half of what I would have liked to, but we did see a fair bit. Below are some of my favourites during our two hour excursion.

We decided to head home once we finished our immediate zone and I decided to live vicariously through Toronto’s Instagram community. If you didn’t make it out, don’t worry, a few displays will be on until October 13! Click here to see where they will be!