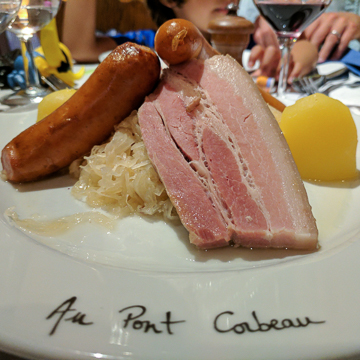 Among the toughest aspects of travelling through France on a budget are the missed food opportunities. We spent spent six days in Lyon, a city with a wide reaching influence on world cuisine, and didn’t once sit down for a nice dinner, preferring to spend our food budget in the amazing French grocery stores. However, when we arrived in Strasbourg, our final stop in France, we made it a point to find a restaurant featured in the famous Michelin Guide. On the advice of Yashy’s ex-boss who is from Strasbourg, we did just that, sitting down one evening at Au Pont du Corbeau, which is located on the canal right next to the wonderful Musée Alsacien.

We were not sure if Au Pont du Corbeau took reservations (we called but did not get an answer) and so we showed up on a Monday evening at 6:45 pm just as the restaurant was opening. With only one group in line before us, we had no trouble getting seated, and walked in to find a charming dining room with an all wooden interior, minimally decorated with small paintings and sketches. The owner, Christophe, greeted us and quickly outlined the specials in English. We spent some time going through the wine list, which was noted as being ‘particular interesting’ on the restaurant’s Michelin summary. In reading a few online reviews, we were aware that Christophe has a great knowledge of wine but we decided to choose our own, opting for the 2010 Chateau de Bellevue, from Lussac-Saint-Emilion, a region we had recently visited. It was a wine we both enjoyed greatly.

Since we were among the first in the restaurant, we didn’t have the luxury of looking around to see who had a particularly tasty looking dish. Choosing an appetizer was easy. Since Yashy, our Little Man and I all love Foie Gras, we ordered our first and only foie gras on the trip from a Michelin starred restaurant, and we would highly recommend trying it if you are going to be visiting Au Pont du Corbeau. In fact, Strasbourg is known for its foie gras.

For the mains, we didn’t find a lot of kid friendly dishes and decided to take a risk on the pork tenderloin for them. The dish came served in a mustard sauce and, in the end not a piece was spared between the four of us. Yashy went with a traditional Alsatian dish that consisted of sausages, thick cut bacon and sauerkraut (see the featured image at the top of this article), while I went with the rib steak. Every dish was so tasty and easily shareable and so we turned the meal into our own little buffet.

I was struck by the presentation of each dish. The term traditional French cooking had little meaning for me until I dined at Au Pont du Corbeau. Here is a world class chef, overseeing the preparation of his finest dishes while also serving as our waiter for the evening. We had previously encountered a one man culinary army in Cagnes Sur Mer, but on a much smaller scale. Here, with several more parties dining throughout the restaurant, we felt like we had discovered an authentic look into the local food scene. And the dishes were so effortlessly prepared that they seem like something I should be able to make at home. Indeed, if I were to prepare a nice meal, it might looked a little like the sliced steak and fried potatoes I saw before me, but never in a million years would I get it to taste like that.

We ended our meal with the meringue, served cloud-like on a plate, as the kids looked on drooling. For once, happy that they loved their dinner enough to eat quickly and get to the desert the moment it was placed on the table. Because Au Pont du Corbeau felt like a place where diners come to relax, we really needed the kids on their best behavior that evening. The great meal and amazing dessert that follow it helped us to ensure their contentment.

Across the canal from Au Pont du Corbeau lies Les BeRThoM, a brew pub that would not have looked out of place in the 19th Century (save for the lighting and printed menus). It’s one of the few places in the city that serves craft beer and they have an excellent selection of Belgian beers as well. We sat down for a breather after walking around Strasbourg’s downtown area that afternoon. Stasbourg was the first to have its city centre classified as a UNESCO heritage site and it’s an amazing place to spend an afternoon.

Les BeRThoM certainly does its part to add to the charm. Like Au Pont du Corbeau, its interior is mainly wooden, including the bar, tables, stools, and much of the floors. The movie lover in me looked around thinking that this is the quintessential tavern, a place that in past times might be the scene of many a beer soaked evening, complete with the occasional fist fight (perhaps it still is). Mainly, I was just happy to have found a few good beers. Les BeRThoM is a chain, they have taverns in more than a dozen French cities, but I have no problem with a chain restaurant as long as the product is good, and the beers at Les BeRThoM kept me pretty happy. An evening dining at Pont du Corbeau with a nightcap at Les BeRThoM would be my kind of night. Were I a resident of the city, it would likely be a ritual. 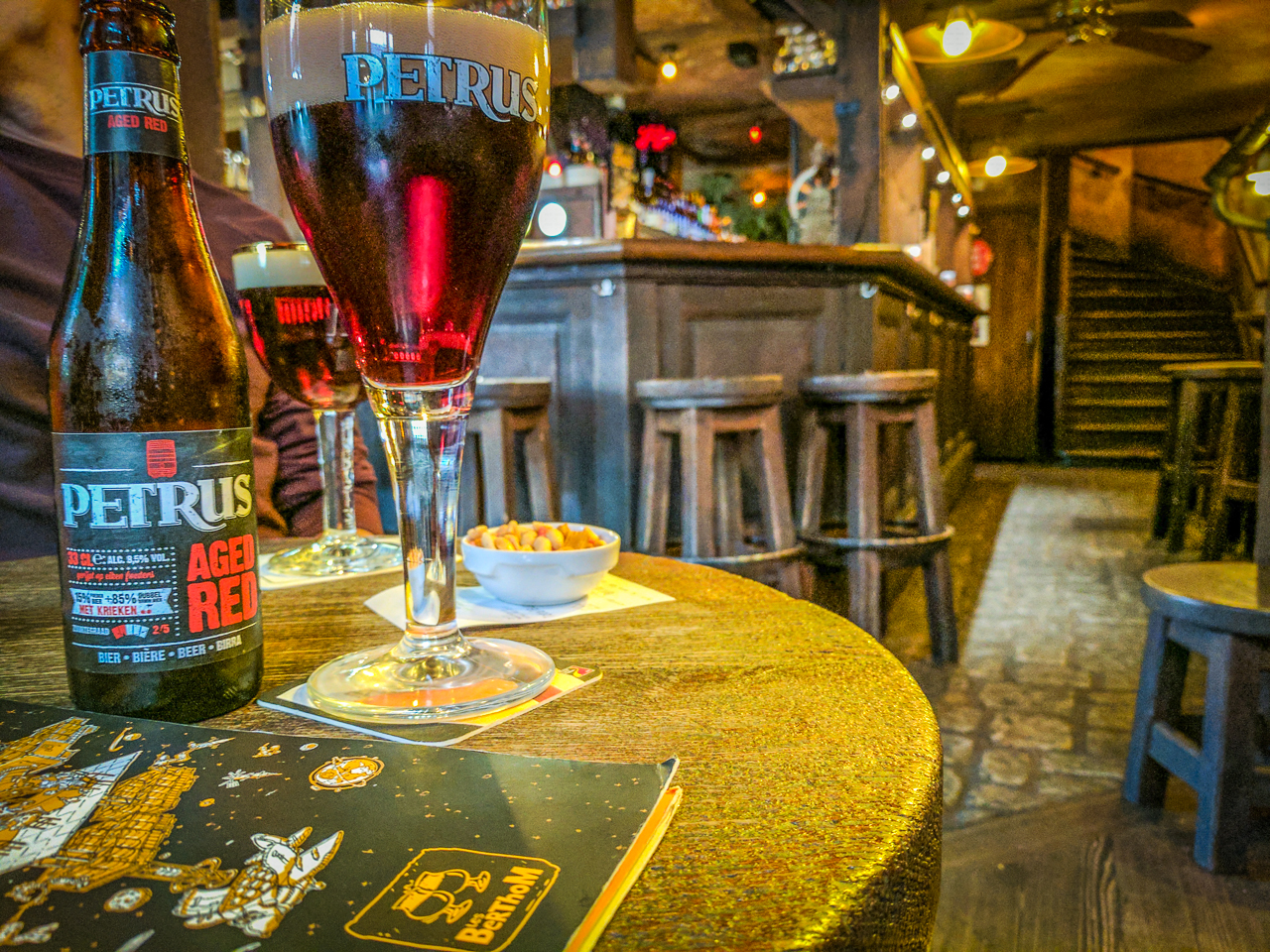