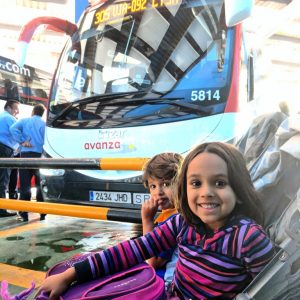 Note: This article provides tips for travelling from the Algeciras/Marbella/Gibraltar region into Northern Morocco. A number of ferries leave ports from other parts of Spain, including Barcelona, but the shortest ferry ride is out of Algeciras or Tarifa.

A few weeks ago, our family landed into Málaga, a city in the southern region of Spain known as Andalusia. The area would be the first of several regions throughout Europe, the United Kingdom and Morocco that we planned to explore along with our two small children, aged 3 and 5. After spending 21 days in Andalusia, including stops in Seville, Ronda, and Grenada, we departed from Calahonda, a small community near Marbella, to travel to Morocco. We would spend the first part of our Moroccan trip in Martil, near the city of Tetouan and about 2 hours drive from the famous blue city of Chefchaouen. To get there, we sifted through a lot of information on the best way to get the ferry across to Morocco.

As we started to research the options, we found the details to be hard to decipher. Websites and message boards provided conflicting information, not to mention a lot of fear mongering,  and we couldn’t find some of the details we wanted to know. In the end, our journey to Morocco ran much smoother than we anticipated. On our day of departure, we started out early, which for us means 9 am. After initially thinking that we would arrive at our HomeExchange in Morocco sometime after 9 pm, we made it to our destination shortly before 5 pm.

Here are the details of the various Ferry routes we explored to reach our destination. 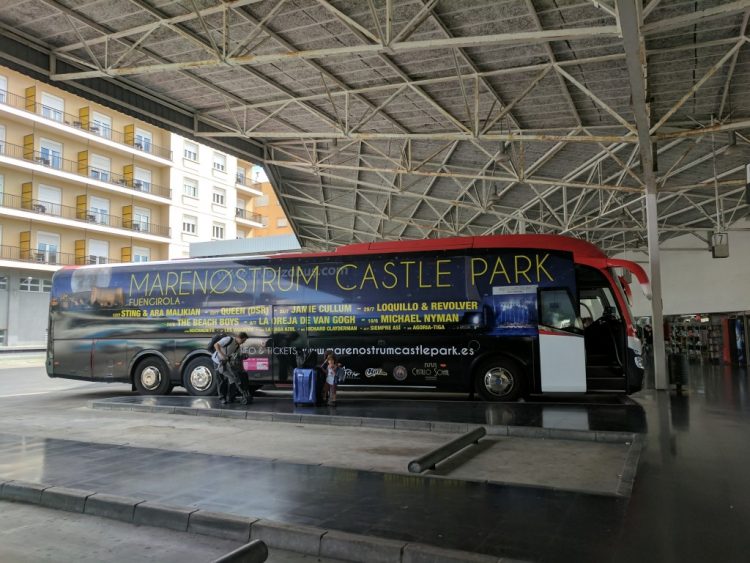 Travelling from Algeciras to Morocco

The main ferry offices are located in Algeciras. To get there, we took an Avanza bus out of Marbella, which cost 9 € for those 5 and over and 4.70 € for kids under 5. The bus was quite comfortable and I would recommend taking it rather than spending a lot of money on a taxi to Algeciras or Tarifa. Once we arrived in Algeciras, we had three options, two of which involved a ferry ride out of the Algeciras port. The other option was to take a free shuttle bus to the ferry terminal in Tarifa. Each option would take us to a different port in Morocco. The Direct Ferries website is helpful in determining the ferry schedules and company options, but we discovered that using one of the many travel agents located near the ferry terminal gave us the best rates.

Option 1: Take the free shuttle from the Algeciras Ferry Terminal to Tarifa, landing in Tangiers

Most of the online forums, as well as the Andalusia.com information site and a Tangier-based driver we had been in touch with prior to our trip,  recommended this option. Tangier is a major port, and from there, travel to other parts of Morocco can be done via plane, train, or bus. This is the quickest of the three routes, at about 1 hour travel time,  but factoring in the shuttle from Algeciras makes it the longest in terms of total travel time. The two companies we found that travel between Tarifa and Tangiers are FRS and Intershipping, both of which would have cost our family of four, with two adults and two kids, about 120 €. In the end, we decided against this route because our final destination was near Tetouan. Had we wanted to go to Tangiers or to some other major city in Morocco, we would have chosen this option.

Option 2: Take the ferry from Algeciras to Tangier Med

Tangier Med is small port located about 30 km east of Tangiers. We identified 5 separate companies that made this route, Trasmediterranea, Balearia, FRS, Intershipping, and AML. In other words, ferries depart frequently. We arrived into Algeciras around 12 pm and found a small travel agency across from the ferry terminal selling tickets, deciding on a 2 pm departure using Trasmediterranea, whose rates were amongst the lowest at 15 € per adult and 5 € for kids 5 and under. With a travel time of 1.5 hours, this was the longest of the three options, but for us, the time difference was negligible.

When we went to pay, the shop owner tried to tell us that he could not accept credit cards. When we told him that was a problem for us because we needed to use our credit card for insurance reasons, he complained a little about the commission, then gave in and pulled out his credit card machine. We offered to pay him the difference but he told us it was no problem. The 40 € we paid was actually quite a deal. When searching for tickets on the 5 company sites, the rates were much higher, in the 50 to 60 € range.

Option 3: Take the ferry from Algeciras to Ceuta

Ceuta is attached to mainland Africa, but the port is still in Spanish territory. The appeal of this port for us was its proximity to our final destination, which was on the East Coast of Morocco. However, the shop owner who sold us our tickets to Tangier Med indicated that the fare was much higher for trips to Ceuta, which we confirmed with on online search. Since the distance between Tangier Med and Ceuta was not significant, we decided to land in Tangier Med. We ended up passing by Ceuta on our way to Tetouan and it looked like a charming small town, located on a eastern facing peninsula, but we were happy with our cost saving decision to land in Tangier Med. 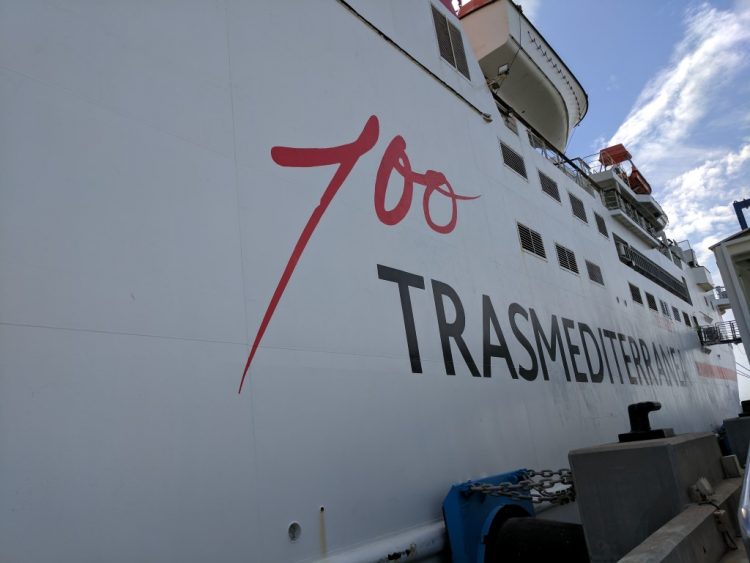 In our case, the customs agent was located on the top floor of the ferry and most of the experienced travellers lined up as soon as they boarded. We read online that one person could get the passports stamped for our entire family, but this was not the case, and we all needed to line up together. The queue moves quickly, but it’s important to remember to complete customs on the ferry. Had we not realized this fact, we would have had issues when we landed and probably would have needed to seek out the customs agent from the boat. Also note that the immigration forms were at the bottom deck even though the immigration officer was on the top deck!

Getting a Taxi in Tangier Med

When we landed at the dock, we boarded an airport-style shuttle bus with the other foot-passengers. The shuttle took us to the main terminal building, a large structure that was largely empty when we arrived. The large cranes and thousands of what appeared to be new vehicles lined up in a fenced area hinted that this was major port, and so we’ll consider ourselves lucky that we arrived on a slow day.

Once inside the terminal, I found a money exchange stall only to be told that their systems were down. Luckily, I was guided to an adjacent, functional money exchange office where I exchanged $200 USD for a little over $1,900 Dirhams. I later found a slightly better rate near our apartment complex, but changing money at the terminal saved us on the taxi fare because the rate we received in Euros was higher than the rate in Dirhams.

After walking outside, we were approached by a young man asking us if we needed a taxi. Since we were in a gated area with only one possible direction to go, we allowed him to guide us to the main gate. About halfway to the gate, we had to pass over a small hose, during which time the guide seized the opportunity to take hold of one of the two suitcases I was dragging in order to “help” us along. I would soon find out that this was in search of a tip.

At the gate, we found several taxis lined up, as well as a dispatcher who guided us to the first taxi available, asked where we were going and quoted a rate. He even pointed to a list of rates to different areas in the region, which assured us that we weren’t getting the special foreigner price. We were told to expect the ride to cost between 500 to 600 Dirhams, so I tried to hold my surprise when we were quoted at 300 dirhams, which is about $30 USD.

After a short struggle to free the seatbelt buckles from their their trapped, clearly unused positions below the seat, we buckled the kids into their travel car seats and were on our way. Driving through the beautiful Moroccan countryside was a treat and the roads were nowhere near as chaotic as we were led to believe, at least on this sparsely populated Northeastern Coast of Morocco (we would later discover those chaotic, windy roads on the way travelling to Chefchoauen). We took a double lane divided highway the whole way to Cabo Negro, near Tetouan, where we would be staying for the first portion of our month long trip to Morocco. What we expect to be an arduous and costly day went quite smoothly. We spend about 30 Euros less than we expected and arrived in time to do a little exploration before settling in for the night.

The ferry itself was comfortable and coming from Algericas to Tangier-Med we had great views of the Rock of Gibratar. Our ferry wasn’t a busy one and so we relaxed in the cafeteria and the kids watched a silent Disney cartoon that was shown on the screen. We had brought snacks with us so we ate those, though there was plenty for purchase in the cafeteria. Yashy and I took turns to walk around the deck but we recommend keeping kids indoors because the railings had wide gaps and we could envision what would happen if the Little Man was allowed outdoors! Our luggage and stroller were stored in the luggage hold as soon as we walked into the ferry and it was there waiting for us on our exit. All in all, a much easier journey than anticipated and the kids were very well behaved for the 9 hour journey! 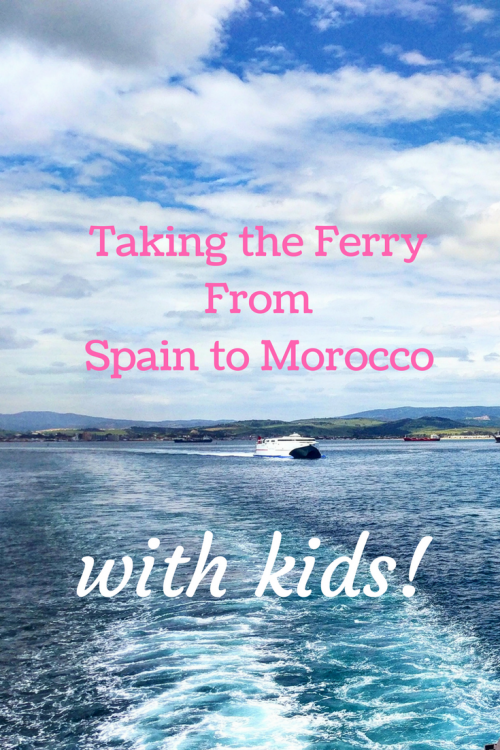