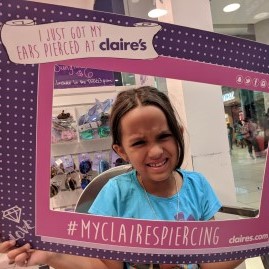 Little Monkey got her ears pierced (again) this week! The first time around was when she was a baby and I spent many hours researching the best places in Toronto to get a baby’s ears pierced, this time, we did it on a total whim! She had her baby ears pieced when she was 3 months old and everything was just fine until about her second birthday when her earring got infected and her grandfather (who is a doctor) along with a friend of mine (who is an ER doctor), had to deal with the 2 year old’s wailing while they struggled to remove the earring. That was the end of her wanting to wear earrings, until the start of this summer (she’s now 6.5 years old). She recently asked if she could get her ears pieced again and I said she could. Then I forgot about it.

This past Sunday, Little Monkey and Baby Boy spent six hours at the Eaton Centre with Chris’ mom. How she managed to keep shopping for that long with the two of them is a mystery to me! I decided to link up with them towards the end and sure enough, Little Monkey remembered and asked if she could get her ears pierced that day. Instead of prepping, planning and researching it, we just walked into Claire’s and got it done. Yup. Just like that! 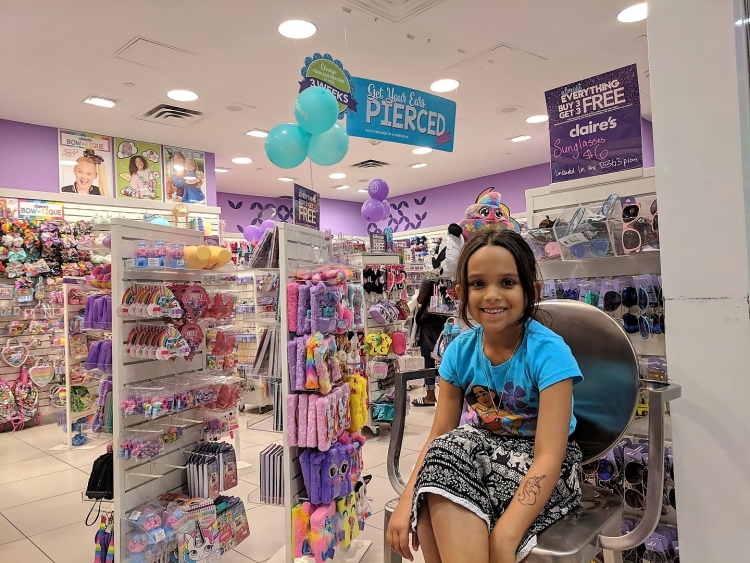 We walked in and a lovely lady told us we could be in and out within 10 minutes ( we were there for half an hour) and she took some time to chat with Little Monkey in order to gain the little one’s trust while I had to fill out a consent form. The smiles soon ended. I had warned Little Monkey that it would be similar to an injection and that the pain won’t be too bad but as soon as she sat down on that special chair fear overcame her and the hysterics began. I quickly found a sequin book on a nearby carousel at the store and asked her to play with it but it didn’t help much!  I took a couple videos of her screaming bloody murder when the pen was used to mark the spot and I couldn’t help but laugh. This was her idea and I kept reminding her of that fact. 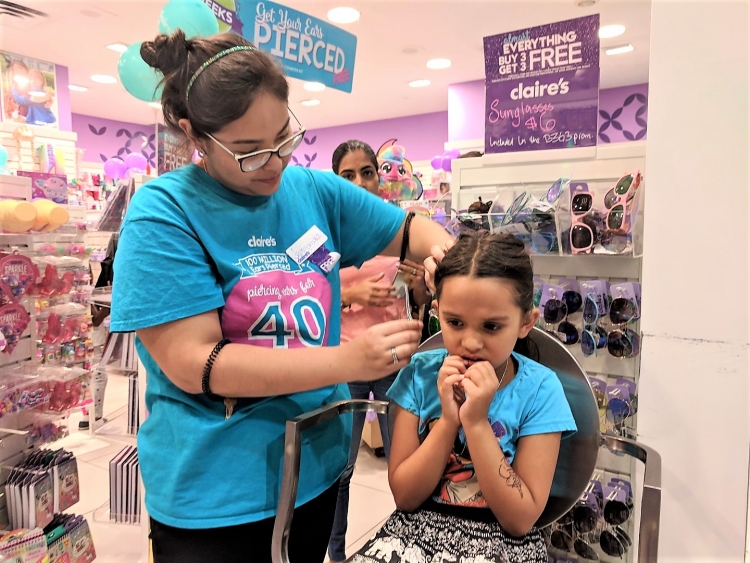 In the end, we managed to get it done and two ladies from the store each tackled a ear and got it done quickly. To cheer her up they gave her a lollipop (after asking my permission) but what really stopped the crying was the chance to go and look at jewelry!! She has picked up a locket for her BFF and I was told that she’ll buy it once she saves up some money! 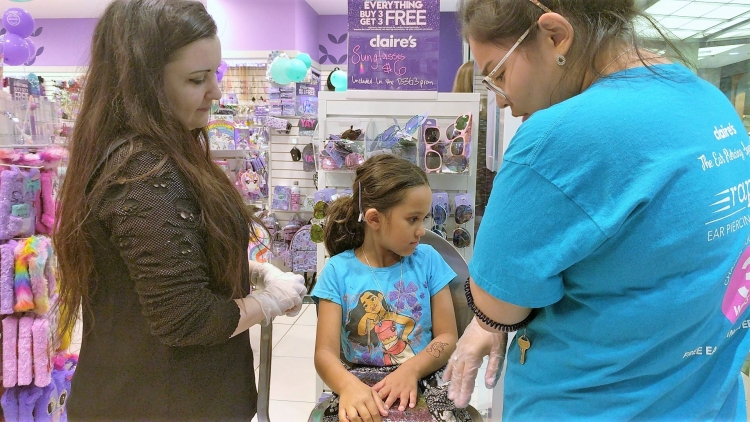 I was a bit apprehensive about getting it done at a costume jewelry store but it honestly was just fine. They took the necessary precautions to sterilize and took some time to ensure that I knew how to clean the earring. For $50 we had her ears pierced and chose a surgical stainless steel earring. They have quite a few options, including gold and gem stones, so you have plenty of choices. We were also given the cleaning liquid and a 20% discount for anything we purchased at the store that evening. 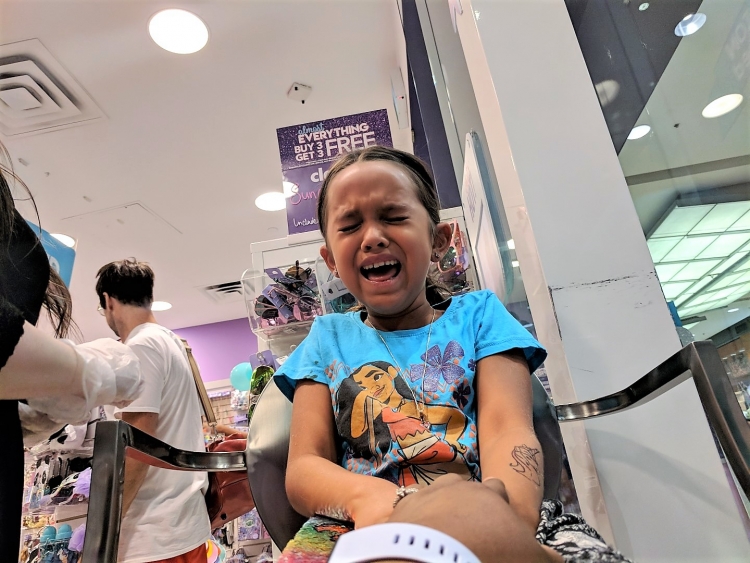 As I mentioned, all in all, it was totally fine. The experience was quite similar to the Caryl Baker Visage ear piercing but luckily we didn’t need it to be done twice this time around! I was informed that if the earring should come out or anything happen with the piercing, that we could go back and get it re-done… let’s just have our fingers and toes crossed that we can avoid using that warranty, shall we?

In hindsight, had we properly prepared for this, I would have actually used a numbing cream or patch like we do before we immunize them.  I often rely on videos to show the kids what to expect, but in this case, I don’t think showing her videos of others getting their ears pierced would have helped us. Few days later we’re sticking to the cleaning schedule and Little Monkey is beyond thrilled with the sparkly pink butterfly earrings she chose. The countdown is on until she can dig through both grandmothers’ jewelry boxes!

I know there’ much debate around if parents should get a child’s ears pierced or if we should leave the choice up to the kids. I took the initial step and then she reconfirmed that I had originally made the right decision. Had it not been infected, she would have made me spend a fair amount on buying her earrings all these ears!