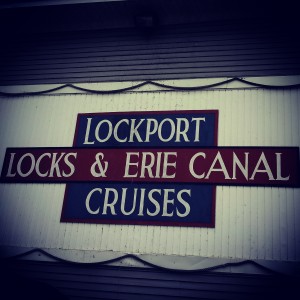 We went off the beaten path during our recent visit to Niagara Falls U.S.A and discovered some stuff we’d never heard of. Love when that happens right? Located about forty minutes from Buffalo and twenty minutes from Niagara Falls U.S.A, lies the Lockport Cave and Erie Canal Cruises. With baby and toddler along, the hubs and I spent an afternoon enjoying the outdoors and learning all about the Lockport Cave and the Erie Canal. We did both of these in one afternoon but it was a long day in the end so you may want to split it up to squeeze in any afternoon naps versus doing them back to back.

Disclosure : Our visit was hosted by Niagara Falls USA, but as always, opinions are totally mine.

We arrived early a few minutes before the tour because we had tickets booked for our tour ahead of time and given that this was in the middle of a rainstorm they provided us with ponchos. They do not carry rain gear for little ones but luckily we had saved the one from our trip to the Cave of the Winds.  Baby Boy tucked under my poncho and baby wearing is most definitely the way to go. No strollers allowed given the many steps and narrow pathways you will encounter, so keep those in your car or at the hotel. Also ENSURE the little ones visit the washroom prior to the tour. The hubs had to leave the tour as soon as we got to the canal to head back  to the check-in area (which is about a  10 minute walk from the actual cave) when the Little Monkey needed to pee. Luckily our tour guide was very friendly and waited on them prior to entering the cave area. Children under four are free with adult tickets priced at $12.50 and kids (aged 5-12) cost $7.50.

Our guide was hilarious and knew exactly how to keep our large group entertained. We got a quick overview of the canal system and of course the main attraction is the man made cave, which technically is a huge rock that was blasted through in the 1850s to help provide hydraulic power. It’s dark and damp once you’re inside the cave and little ones may get scared but Little Monkey was fine. The hard part was telling her to be careful as the guide is quite adamant about sticking to one side of the cave to keep every one safe. The trick is to be at the back of the line as it automatically slows toddlers down and prevents them from running ahead.

Engineers and history buffs will be very eager to hear all about how the cave came to be, snoop around the place and view artifacts and geological formations. We pointed things out to Little Monkey but she was too busy looking for rocks along the way – which was fine. The tour takes about an hour and a half and towards the very end  to get to enjoy America’s longest underground boat ride along the Erie Canal. Because we were at the end of the line we got the last rung on the boat which was great… the boat only goes one way, which means those in the very last row get a front row view on the return. It’s very dark during the ride and between the guide’s flashlight and intermittent lights activated as the boat approaches each area, you get a good view of the stalactites and a few drips on your head as well. The drips aren’t bad at all, the only reason we had ponchos on was because it was pouring on our walk over to the cave. Definitely off the beaten path and one that older kids especially will love.

The early afternoon rain disappeared by the time we go to the Erie Canal Cruises location and it was a beauty day for a boat ride. The place hosts many events and we walked right into a wedding, which was a bit bizarre and quirky at the same time. What you get here is a truly unique experience, this is no ordinary cruise. Our captain was a passionate guy who mixed in history, engineering and folklore into his narration. I paid attention at the very start but then soon got distracted by the scenery and feats of engineering that was going on around us. The Cruise costs $17.50 per adult and kids aged 5 to 10 require a ticket priced at $9.

The Erie Canal was built to create a water route from New York City and the Atlantic Ocean to the Great Lakes and in 2000, the United States Congress recognize the national significance of the canal system as the most successful and influential human-built waterway and one of the most important works of civil engineering and construction in North America. Says something doesn’t it? Bring any snacks you want on board, Little Monkey and Baby Boy had plenty to keep them occupied and there’s a washroom on board. An enclosed deck below means you can stay warm and cozy if you prefer to steer away from the fresh air.

The Erie Canal climbs 570 feet in elevation from the Hudson River to Lake Erie through 57 locks. Locks are basically elevators for boats, lifting and lowering them as they travel along the waterway. When we realized that at one point we were at the same level as Niagara Falls, it was mind boggling. The kids didn’t understand what was going on but we did! Baby Boy hung in the Bjorn the whole time, trying to sneak in a nap and yes, he was super cranky. He loved being on the deck with the breeze on his face whilst Little Monkey wanted to be in the cabin area, near the candy stall! Yes they sell coffee, tea and BOOZE on board. Oh yea! Enjoy a drink as you spend two hours being raised and lowered along the Erie Canal. It’s a calming and soothing ride.