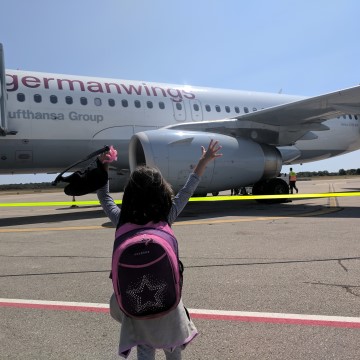 The time had come for us to leave Croatia and head into Manchester, our VERY LAST city, and as we were looking on Skyscanner and Google Flights for the best deals, Skyscanner showed us that there was an airline called Eurowings. I’d never heard of them before and did some digging to learn that it is a German airline and they seem to code share with a couple airlines which made finding reviews for flying Eurowings with kids a bit difficult but given that they were the cheapest option, we chose them and hoped for the best.

Similar to our flight booking tip with Croatia Airlines, we did a split booking for Eurowings as we were able to save some money by having the hubs and Baby Boy buy their BASIC ticket which came with no luggage allowance or seat allocation. Little Monkey and I chose the SMART fare which gave us a suitcase allowance each, choice of seat and a snack on board. I didn’t really expect much with the snacks so I did ask the hubs if we should all go with the BASIC ticket and hope that we get seated together but he thought it would be best to at least have two seats together in case of an emergency. Technically speaking it would have been cheaper if we had chosen the BASIC option and tagged on two suitcases but we would not have had the seat allocation or snacks for the two of us. 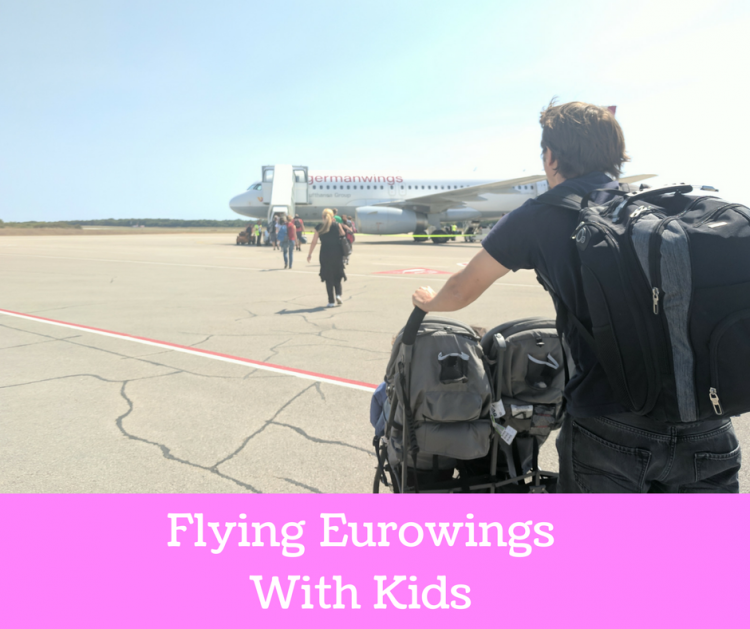 Our flight departed from Pula and had a three hour layover in Dusseldorf before we arrived into Manchester. We arrived at the Pula airport 2.5 hours before our flight which meant we had plenty of time and were one of the first to check in. Pula’s airport has a little playarea for the kids so they enjoyed that while I caught up on some work as the Wi-Fi was great. Our plan was to have lunch once we got into Dusseldorf and so we didn’t really buy any snacks at the airport. The security staff were also nice enough to let us bring in the kids’ juice bottles. 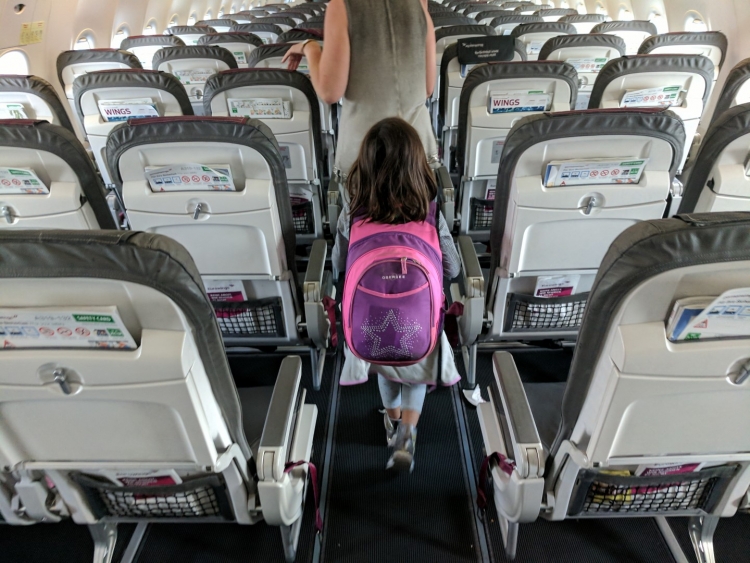 Baby Boy and the hubs were seated together with no issues and Little Monkey and I were in our pre-selected seats. Our snacks consisted of a stale meat sandwhich which also had a small pack of gummies and a box of water. We were also given the option to choose a small drink (we got about 4 oz worth of liquid each, not even a full can of pop worth). In flight entertainment was the option for us to hop on the Entertainment Wi-Fi and watch movies/shows or play games on our own screens. I couldn’t get the movies working but did enjoy playing some games on my phone to keep us entertained for the very short flight. Little Monkey was quite happy with her pre-downloaded Netflix shows and so, it was a smooth flight. The crew on board were also kind enough and attentive so Eurowings definitely has service in mind. 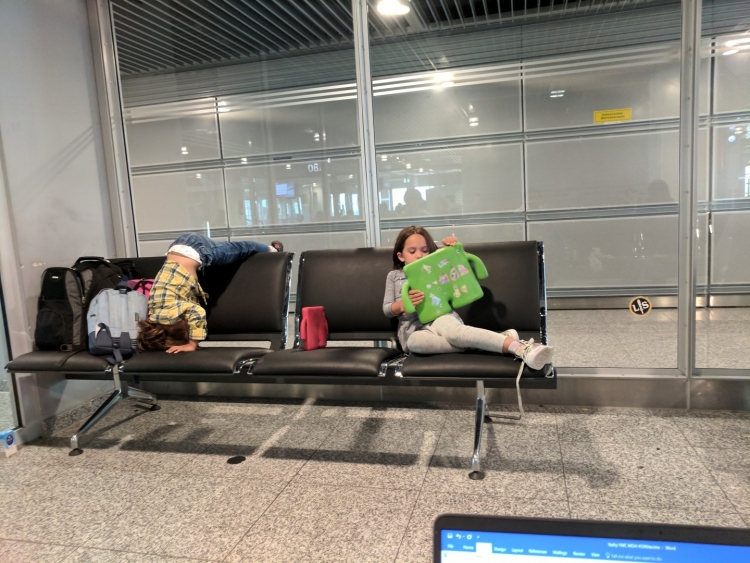 On arrival in Dusseldorf we quickly realized that because we didn’t have our connecting boarding passes (despite our luggage being interlined all the way through), we were stranded in a very tiny terminal with one quick serve option that was ridiculously overpriced. Desperate, we forked over about $18 for two tiny salads, the pasta one being quite rancid. However, Wi-Fi was great here so we managed to catch up on quite a bit of work and the kids enjoyed the chance to hop on YouTube. I think we lucked out a bit because as we check-ed in the agent at the gate was quite nice and I THINK he may have put a note in the system for us to receive an extra snack. I say this because we received 3 snack packs onboard instead of two! However, he was so nice that he also sat us together and given that the seat configuration was 3 by 3, I ended up seated between the two kids while the hubs was across the aisle from us. YOU KNOW how we like to divide and conquer! Luckily, the hubs had two empty seats by him so we sent Baby Boy off to be seated with him as Baby Boy just doesn’t seem to like flying with me and gets too needy. The moment he sat down with the hubs he conked out for the entire 2 hour flight! 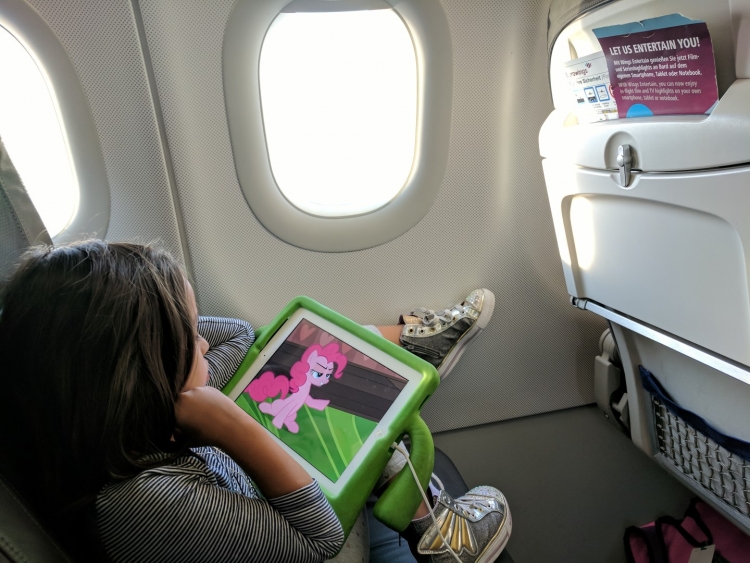 Just so you do know, for children under 12 years, the same luggage regulations apply as for adults. This applies even if children will not be sitting in their own seats. They are also allowed to bring a stroller OR crib OR booster seat at no extra cost. We brought our double stroller to the gate with us in Pula but didn’t get it in Dusseldorf and only received it with the luggage in Manchester. Something to keep in mind if you rely on the stroller for the bigger airports. We did have to take a bus when we disembarked in Dusseldorf so not having the stroller was actually easier for us! If you didn’t pay for the SMART or BEST seats, you’ll need to purchase any liquids or food you want on board, so remember to stock up before you board the flight.

Overall, a rather uneventful journey from Croatia to the U.K with kids and that’s a good thing. Would we fly with Eurowings again? If it were the cheapest option, yes. Though I might avoid the snacks and just bring my own! 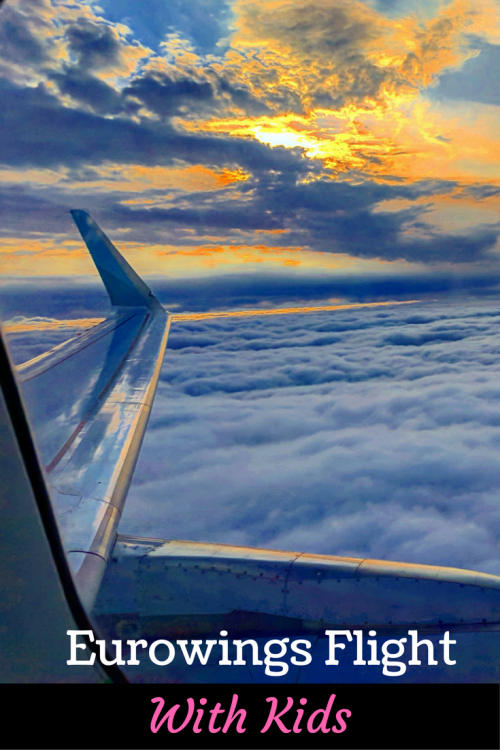