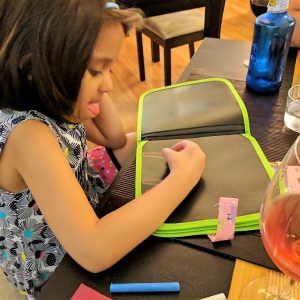 Here is a common predicament we encounter while travelling. We’ve just spent the day exploring an unfamiliar city. After walking between 5 and 10 kilometres over several hours, everyone is famished. A good meal and a drink would be the perfect remedy for our fatigue, so we pull out our phones to scan for restaurants using TripAdvisor. On first browsing the search results, the options seem endless. In bigger cities, we usually find ourselves within walking distance of at least 4 or 5 of the 25 top rated places in the city. On closer inspection, however, many are upscale places that might not appreciate our downtrodden look, while others are cafes and dessert spots, which always seem have great TripAdvisor ratings, because who doesn’t enjoy a good coffee and some dessert?

Eventually we settle on a place and make our way towards the restaurant. When we arrive, we encounter the dozens of other tourists who also found the place on Trip Advisor. The hostess tells us to expect a 1 to 2 hour wait. Being hungry and unwilling to wait that long, we leave and walk into the first place we see. Usually, that place is subpar and we end our day in disappointment.

Now, we often try to plan ahead, spending evenings in our hotel room browsing through the TripAdvisor listings in search of a top rated spot where we can make a reservation and get a great meal for a reasonable price. We executed just a plan during our recent trip to Málaga, Spain, booking a table three days in advance at La Luz de Candela, which, at the time of this article, is TripAdvisor’s number one rated restaurant in Málaga.

Upon entering the Luz de Candela for our 7:30 Saturday reservation, we found the restaurant empty, which was utterly bizarre at the time, but began to make sense in the coming days. This was our fourth day in Spain, and while we were aware that many Spaniards take an afternoon siesta, we had no idea of the extent to which Spanish cities shut down between 4 and 8 pm everyday. Most restaurants close during that time, and if they stay open, they are rarely busy.

Our 7:30 arrival at La Luz de Candela would be like a family showing up to a restaurant in North America at 3:45 expecting to see the dinner menu. However, shortly after we settled in and started perusing the menu, additional patrons quickly populated the small dining area. The restaurant only seats about 25 to 30 diners, so I would imagine that it would be nearly impossible to walk in after 8 pm without a reservation and expect to be seated quickly. Not only were we seated quickly thanks to our reservations but they seemed to welcome kids as we spotted some highchairs in the bathroom (seems to be where most restaurants in Malaga were storing their stuff!).

Our waiter, who may have been one of the owners, rhymed off a number of specials in addition to providing details on the menu options. We had no shortage of intriguing options. The dishes are all served tapas style, in small portions, which allowed us to sample a few items from both the specials list and the regular menu. From the specials, we ordered a seared tuna dish as well as a seared scallop with black pesto, which was served thinly sliced with the pesto drizzled on top. Being from Atlantic Canada, I am used to eating scallops cooked and served whole, but this preparation was a refreshing new way to eat one of my favorite foods. 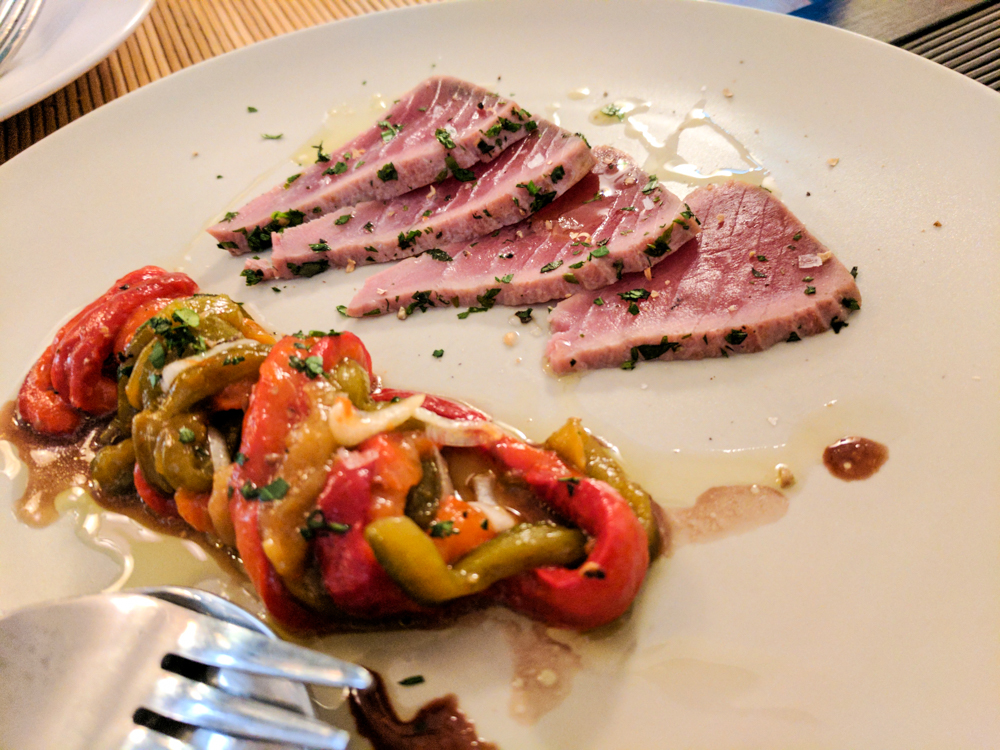 The menu items we ordered included Salmon tartar, Codfish brandade w’ Vitelotte, Duck foie gras, and Rump Steak – all were delicious. With two small kids, we really enjoy tapas style eating because the kids are unpredictable in their eating habits. They will usually refuse to try a dish based on its look. Too many colors will make them wary, as will excessive sauce, but when they get hungry enough, the kids will break down and give something new a try.

On this day, the Little Man willingly tasted the Foie Gras, spread over toasted bread, and he loved it. The Little Monkey refused almost every food item until the rump steak arrived at the table, the last dish we received. By that time, she had built up an appetite and finished off most of the dish herself. Both kids had eaten enough to earn some dessert and we all shared the Chocolate & Orange Quenelles, which was quickly devoured.

My personal favorites were the scallop and the cod brandade w’ Vitelotte. Cod, “Bacalao” in Spanish, seems to be a staple of Spanish cuisine, to my delight. We eat a lot of cod in Atlantic Canada, especially in Newfoundland, where I was born, and the number of cod-based Spanish dishes I have found has made me very happy. At this point, when I find cod on the menu, which is in most places, I order a tapas portion and it rarely disappoints. The brandade is a potato based dish sure to make anyone of Irish discent happy.

Using TripAdvisor to find great restaurants is a skill. We have had our share of disappointments and delights. Visiting the top rated place in Porto, Portugal resulted in one of the great dining experiences of my life, but a few days later in Lisbon, we checked out a top rated seafood restaurant and had a miserable time, waiting in line for an hour to eat what our family felt was subpar food preparation. We will continue to rely on TripAdvisor because the great experiences continue to outweigh the bad ones.

Our meal at La Luz de Candela was one of the good ones. I am not sure if the restaurant deserves the very top place in Málaga, but that’s the price a place can pay for being number one. Sky high expectations can be difficult to meet, but we had a great meal, tasted some nice wines, and were treated to first class service, so we left the restaurant feeling quite content. They also offered us a complimentary shot of sweet Malaga wine to end the meal. If you ever find yourself in Málaga, make sure you make a reservation at La Luz de Candela.