The many films of Walt Disney never leave us. We see them as kids with our parents; we later share them with our kids as parents. I talk to many new parents who are excited to sit down with their kids and share a favorite Disney cartoon with a son or daughter experiencing the magic for the first time. Include me in that group. The first movie the Little Monkey and I watched was Cinderella, a film made long before the both of us were born, and I was thrilled when she watched the entire movie without budging. In the days and months to come, I would download and share many more of the classics I watched as a kid, as well as a few of the Pixar films that reinvigorated my love of animation as an adult. Within these viewing experiences, I was watching my daughter learn about life, picking up moral lessons and learning to understand her emotions though unusual and engaging characters. Through the years, Disney has certainly changed, but the films have always featured socially conscious messages about love and acceptance. In our household, the Disney Princesses hold sway, and may for some time. For the next 13 weeks, I’ll be looking at all of the Disney Princess movies, starting with Snow White and the Seven Dwarfs and working my way through to Frozen, examining the life lessons, entertainment value, and kid friendliness of each movie. Let’s start at the beginning.

Snow White and the Seven Dwarfs

When Snow White first opened on screens in 1937, what a wonder it must have been to kids and adults alike. TV did not exist. Most films of the time were black and white productions and none would have jumped off the screen quite like Snow White and the Seven Dwarfs, as if a classic painting had magically and beautifully sprung to life, and then began to sing. Snow White became the top grossing film to that day. Adjusted for inflation, it remains one of the top 10 grossing films of all time, with likely more than double the attendance numbers of Frozen, which is seen as Disney’s biggest success in decades.

Most children nowadays are familiar with Snow White by the time they turn three. She is, of course, one of the key players in the ubiquitous Disney Princess mafia that takes so much money from the pockets of hard working parents and grandparents everywhere, but she is also the first Disney Princess, though she was never intended as the figurehead to start this billion dollar enterprise. When Walt Disney began production of Snow White and the Seven Dwarfs in 1934, using source material from the Brothers Grimm fairy tale of the same name, the Dwarfs had been the intended focus of the story, seen as characters who could be developed with comedic personalities and placed into screwy situations. Fortunately for Disney, the direction of the film eventually focused on the relationship between Snow White and the Evil Queen, and the first Disney Princess was born.

Despite the objections of both his wife and business partner, Disney fought to get the film produced, even mortgaging his house to help cover the enormous production costs, which ran close to $1.5 Million, a hefty sum during the Great Depression. Most of the film’s animators had been newspaper cartoonists. Many of the techniques used to produce the film were being developed and tested for the first time. The staff was actually encouraged to watch the frightening Nosferatu, the first and finest film ever made about Dracula. When the film was finally released in 1937, the film industry was still in its younger days. The first talking picture had only been released in 1927 and the first full length feature film a little more than 30 year prior. To put that into perspective, ET: The Extra Terrestrial was released 32 years ago this year. At the Academy Awards that year, Walt Disney was presented with an Academy Honorary Award for Snow White “as a significant screen innovation which has charmed millions and pioneered a great new entertainment field”. The Award was a full sized Oscar Statuette and seven miniature versions. 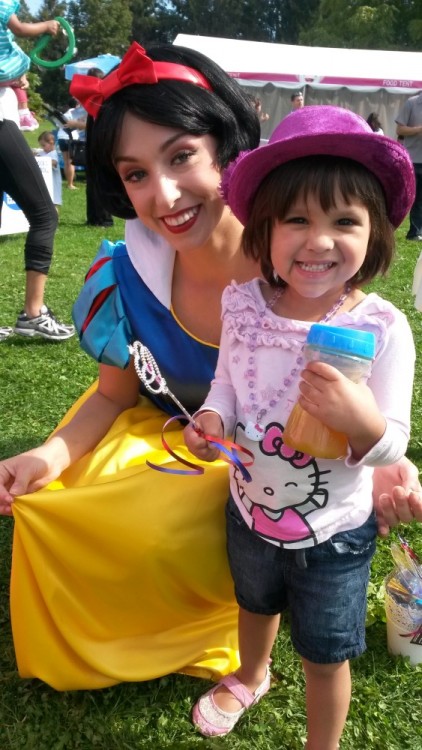 Disney has done an admirable job in recent years exploring the relationships between characters falling in love, with the running joke in Frozen being the naïveté Anna shows in wanting to marry a man she just met. It is as if Anna watched Snow White too many times as a little girl. The Prince sees Snow White and immediately falls in love, a love that is reciprocated by Snow White. It’s a fairy tale most teens need to be warned about these days.

The Evil Queen believes that beauty is a virtue, and though the principle conflict results from Snow White’s burgeoning loveliness, the film nicely shows that Snow White makes friends and possibly avoids being killed by the huntsman with her kindness and goodwill. We also see Snow White cleaning up the Dwarfs cottage in the hope that they will reciprocate her gesture and let her stay with them. I know we are always bargaining with the Little Monkey to clean up before any new fun begins, hoping that she takes a lesson from Snow White.

Snow White, of course, falls victim to putting her trust in a stranger when she opens up to the Evil Queen in disguise and takes a bite out of the poisoned apple. The wickedness of the seemingly kind old lady can help parents open up a conversation about talking to and accepting gifts from strangers.

The songs have been a major factor in the success of Snow White. “Heigh Ho” and “Whistle While You Work” must have been sung as often as “Let it Go” by kids growing up at the time. The Dwarfs are among the most beloved of all Disney characters and the scene where they first meet Snow White, their noses poking over the bed, is an unforgettable moment from my childhood. For a film that is almost 80 years old, Snow White remains as one of Disney’s best films. The movie briskly moves from one scene to the next and easily captures a kid’s attention, especially after Snow White first enters the forest. The character of Snow White seems a little tame compared to the adventure seeking heroines who followed in her princessly footsteps, but kids are drawn to her kindness and innocence.

Because the Little Monkey has yet to ask me what happens to people when they die, I am still weary of the topic in any Disney movie (I am still waiting for her to ask when Elsa and Anna’s parents come back). None of the characters die onscreen in Snow White, through the witch does fall off a cliff. The movie is a little frightening when Snow White is lost at night in the forest, but the scene dissolves into the charming image of Snow White waking up amongst all of the furry forest creatures. Snow White was one of the first movies the Little Monkey watched, when she was a little under 2 years old, and she still enjoys seeing it on a regular basis.

Next week, I’ll take a look at Cinderella.