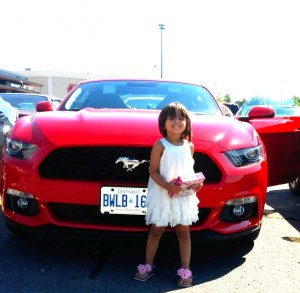 Living in Toronto many of our friends run away to their Muskoka cottages and it was only a couple weeks ago that I had a taste of the Muskoka cottage life. It was delicious! While we spent a weekend there, I must admit that a day trip would be quite possible as well. Having done day trips to Niagara Falls on  numerous occasions, I can see us heading back to the Muskoka area in the near future. Many complain about the traffic jams but we encountered none, mainly due to the fact that we always try our best to hit the road during the off peak hours. In fact, after all our crazy road trips, the two hour drive to Muskoka felt eerily short!

We loaded up the kids and our gear into the 2015 Mustang a couple weeks ago and decided to leisurely make our way to Muskoka. You may recall that I was quite shocked that we were able to cram as much as we did into the Mustang, but even more surprising was the fact that the two car seats fit with enough space for our mini cooler between Little Monkey and Baby Boy. We did have to keep Baby Boy forward facing but it wasn’t a concern for us at his age. With the two of them able to grab snacks and watch their ipads, I was allowed to relax upfront and enjoy the drive into Barrie. 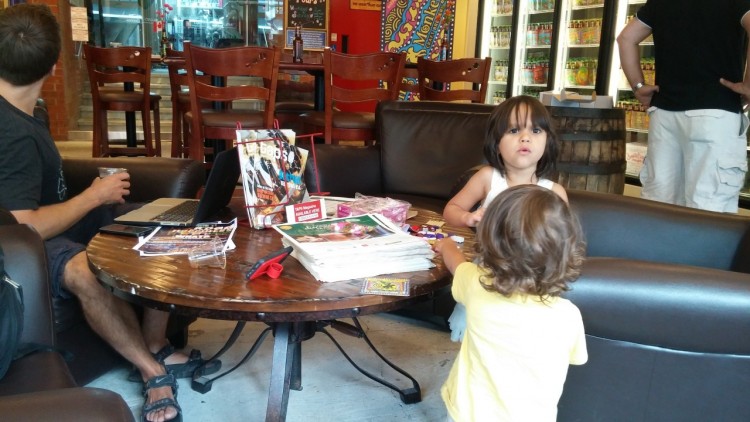 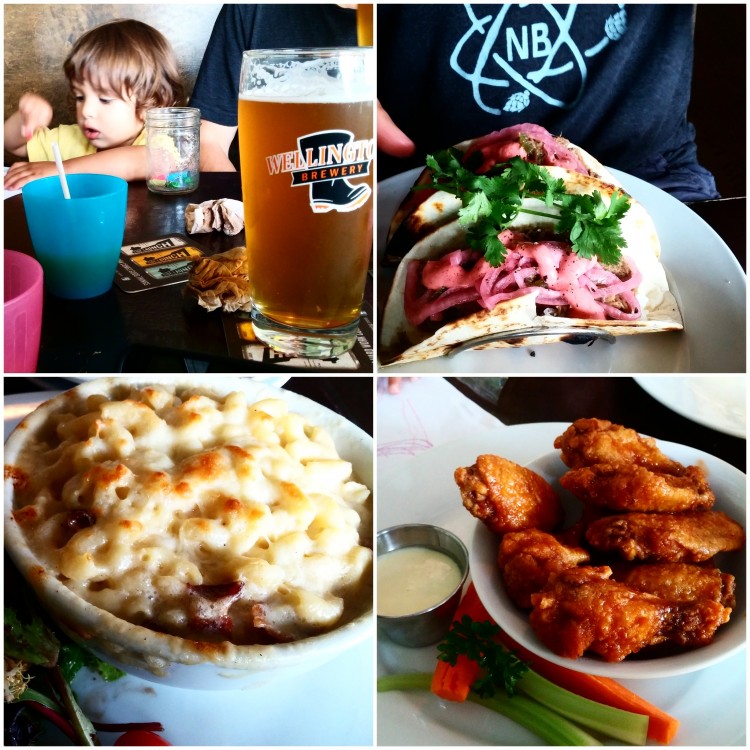 Yes folks. Barrie. Why did not one tell me how cute Barrie is? I was expecting to be greeted by a sleepy town but instead we received a hug from a true seaside town. The streets were lined with shops and the bright flowers were in full bloom with Lake Simco in the background. The hubs was on a mission to procure some fine Flying Monkeys brews that were not available at the LCBO and so we thought it would be a quick in and out situation. We were mistaken. You see, Flying Monkeys has a nice setup with a couch area where we set up shop and caught up on some work emails and then I enjoyed a couple beer samples while the hubs took over diaper duty. Yes… the brewery has a change table folks! We didn’t do a tour but did enjoy the main area and then popped over for lunch at one of the spots around the corner. The hubs and I have mixed feelings about the Local Gastropub that came highly recommended by the lady at the brewery. Great selection of beers on tap, colouring sheets for little ones, plastic cups and some decent dishes. Stick to the traditional dishes and don’t get Mexican here (duh!). 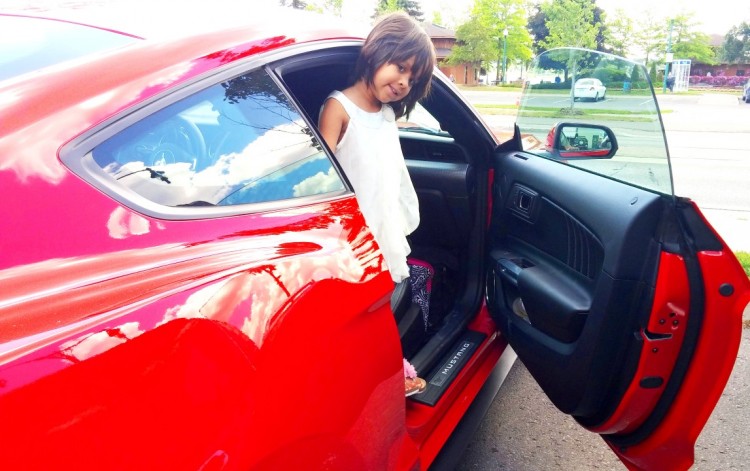 After a leisurely lunch and having stocked up on some beers for the cottage, we got back into the Mustang and made our way into Gravenhurst. The kids fell asleep which meant that I got to do some work while the hubs played his tunes for the next 45 minutes. I’m telling you… before I knew it we were at our destination! The Mustang is one smooth car that hugs the roads really nicely and nearly rocked me to sleep as well! Obviously the Mustang will never be an every day car for a family like ours but I must admit that it was quite fun cruising around in it for that week. I enjoyed it despite being a bit cramped in the front due to the car seats at the back! 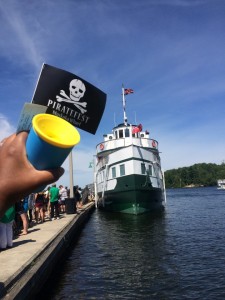 The reason I say Muskoka is a great day trip is because the city of Gravenhurst is home to some very kid friendly attractions and events. Little Monkey and Baby Boy had an absolute blast during their afternoon exploring downtown Gravenhurst. 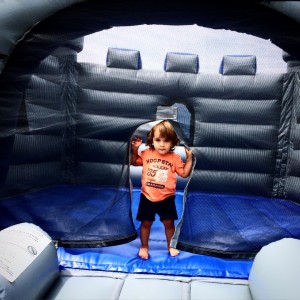 There are a couple cruises one can take in Muskoka and there’s three special kid focused ones through Muskoka Steamships. We attended the Pirate Cruise which took us on an hour journey through the waters with our guide, the pirate. He was a bit too loud for my taste but the kids seemed to enjoy his act and were happily following him around the boat. Baby Boy was munching on the many treats we had packed and I sipped on a Muskoka Brewery pint while Little Monkey sat with a group of kids. It was a busy Sunday so the boat was packed with strollers, grandparents and families of all size (and many of them decked out in Pirate gear). Luckily I had decided to baby wear so it was a bit easier than having our double stroller on board. Despite all of that, we managed to get a bench to ourselves and even wandered to the upper deck which wasn’t as busy. There we had great views as the wind tousled our hair and we waved to all the other seafarers. The cruise was the perfect length of time for us -an hour. No less. No more. There’s also a Frozen cruise which happens on occasion and I know we’ll have to take Little Monkey back for that one! 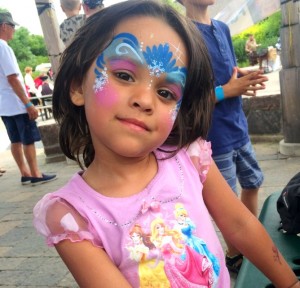 The tickets to the cruise also gave us access to the new Fun Zone which has plenty to keep kids occupied, especially on rainy days. I was told there were interactive Lego displays, pirate enactments and even a rainforest setup where kids could meet a python, crocodile, tarantula, scorpion or lizard as they showcased the colourful world of the tropical rainforest. The reason we didn’t make it to the Fun Zone was two fold… we were hungry and decided to grab a bite first and also because we got distracted by the Pirate Festival that was going on that weekend. I got the impression that there’s always a fun festival or another happening and Muskoka really seems to really cater to the kids. During our visit there were five or six bouncy castles, face painting and rides like the Ferris wheel set up. Kids under 2 were free and every one else needed tickets ($10 for adults and $20 for kids). Money well spent because the amount of fun Little Monkey and Baby Boy had, were ridiculous. The face painting alone was worth more than the cost of the entrance! 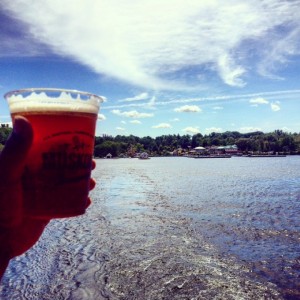 Muskoka is also home to a couple notable breweries such as Muskoka Brewery, Lake of Bays and Sawdust City, all worth a quick visit into for stocking up on craft beers that aren’t usually available at the LCBO or beer store. I’ve  also heard there’s some awesome waterfalls so I plan to explore that the next time we decide to cruise around in a fancy Mustang that strangers feel compelled to come up and chat to us about! Oh and if you were wondering… the 2015 Mustang performed amazingly on the mileage front as we only spent $50 on gas all week long! Mustang or not, Muskoka is definitely a spot I’d recommend Toronto area families exploring during the warmer months.