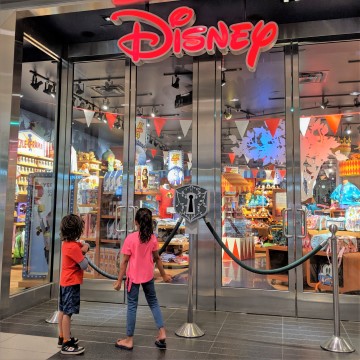 Despite living across from the Eaton Centre (which is home to a Disney Store) for nearly 15 years, I had never heard of or witnessed the opening of a Disney Store. On our trip to Sudbury with our kids, we got chatting with someone from the tourism team who told me that she brings her daughter to Toronto and having her open the Disney store is always the highlight of the trip! WHAT? Really? Well…sure enough Little Monkey didn’t let me forget that conversation and so we kept trying our luck. So if you’re wondering about how to open the Disney store as a guest, we got you!

Tips for Opening the Disney Store in Toronto

Unlocking the magic at your local Disney Store is one simple and FREE way to get close to the magic of Disney. The ceremony is only a few minutes but the music and fanfare most definitely brings that famous touch of magic and I was immediately transported to my Disney memories. While I used to visit Disney World quite often prior to having kids, we’ve only taken Little Monkey and Baby Boy to Disneyland when they were tiiiiiiiny (one was 3 months and the other was 2 years old) and our recent Kissimmee learnings, definitely have us thinking about a multi-generational Disney World trip for 2020.