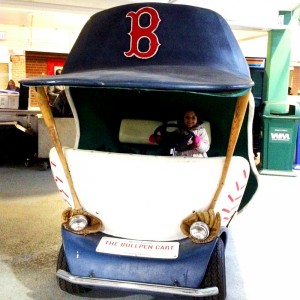 On our recent family trip to Fenway Park, we were treated to an insider’s look, or the case of this Blue Jays fan, an interloper’s inspection, of one of America’s most famous stadiums. With its unusual shape, featuring a 37 foot green wall known to baseball fans as the Green Monster and its classic ballpark feel, Fenway is the ideal history stop in Boston for anyone who prefers baseball to tea parties. The building has been the home to Major League Baseball’s Boston Red Sox for the past 104 years, and I was swept away by the history on display throughout its halls. After winning three World Series Championships in the past 12 years, the team is going through a golden era, one that we Jays fans hope is coming to a close as we try to embrace a new era of our own.

We made our way over to Fenway on a dreary Saturday morning in March, about 10 days before the 2016 baseball season was slated to begin. Staying at the Fairmont Copley Plaza, we were about a 20 minute walk from the ballpark, giving us a chance to take in the sites along Bolyston St. I had the GPS coordinates entered into my phone but was expecting to see the stadium well before it finally came into view. After cutting through the Fenway Victory Gardens, we reemerged onto Boylston street to find ourselves staring at a statue of four Red Sox legends outside Gate B on Van Ness Street. Pressed for time, I snapped a quick photo as we followed the wall along the stadium to pick up our tickets. Tour tickets can be purchased up to two weeks prior to your visit and tours run on an hourly basis between 10 a.m. and 5 p.m. in the winter and from 9 a.m. to 5 p.m. during the season (unless there’s a game, in which case tours end 3 hours before the game). If you opted for the GO! Boston card, available with Porter Escapes packages, then the tour is included and you just need to show up on the day to grab your tickets. Kids under three do not need tickets!

When we finally arrived at Gate D to start the tour, we joined more than 50 people as we crowded in close to the gentlemen explaining what we were about to experience. There is a security screening, similar to the airports, but it was quite easy.When we finally made it inside, we were told that the lift was broken and so, facing the prospect of a strollerless tour, we pulled out the kids, parked our stroller in the designated area and started to follow the crowd. Even if the lift, is working during your visit our recommendation would be to baby wear or carry the kids around as there’s plenty of steps you’d encounter and it really isn’t worth pushing a stroller through the park. If you’re lucky enough to attend a game during your visit and have a little one with you, know that there’s a couple family rooms scattered through the ballpark, which is fantastic, especially during those nursing stages. 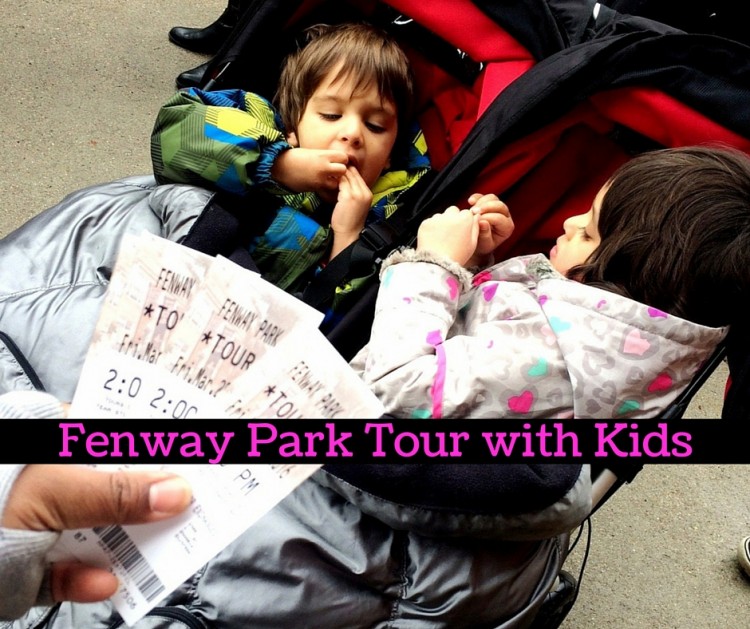 Undoubtedly, Fenway is a place for baseball fans. The building is such a big part of Boston sports history that one needs to follow the sport closely to truly appreciate what the stadium means to Red Sox fans. Each of the two foul poles is named after a former player and the Green Monster is probably the only wall in baseball that has an official name. My favorite part of the tour came early on, as we were all invited to sit along the third base section of the stadium in some of the oldest seats still used in baseball. The view was incredible, even with no one on the field, and I hope to go someday with the kids for a game. The tour takes a little under an hour and a half and is a pretty comprehensive look at the building, taking participants from the first level concourse, through the visitors dressing room, and then into the stands along the third baseline before the group heads upstairs to visit the Green Monster. Later, a visit to the press box provides a great look into how the media watches the games. The tour then concludes in the right field bleachers opposite the Green Monster, providing the perfect photo op. 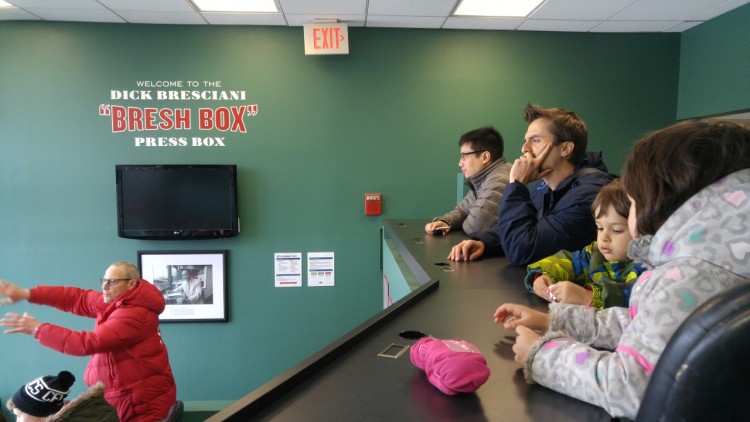 Fenway is a pretty amazing place, though I couldn’t help but wonder what it was like to attend a game during the astounding 86 year stretch from 1918 to 2004 in which the Red Sox failed to win a World Series, despite several agonizingly close calls. With that streak a thing of the past, the Fenway Park that we visited was full of great memories. As we made our way towards the top of the Green Monster, we passed a series of Sports Illustrated magazine covers that help to capture the decades long agony that turned into ecstasy in 2004, and the organization has also dedicated several old ticket booths to documenting those three recent World Series championships, booths filled with gear used in those series and photos from several great moments. One can forgive the overzealous presentations given those long championship starved years.

The Little Monkey did a great job taking everything in, but the Little Man had not caught the sleep he needed the night before and spent the whole time on my shoulder, and so this was really a trip for Dad, albeit a long one with a 25 pound weight on my shoulder. I really hope that one of the kids grows up loving baseball. It was my favorite sport to play as a kid. I used to love playing catch with my Dad and spent a lot of summer afternoons pretending to be the next great Blue Jays pitcher as I threw tennis balls against our garage as hard as I could. I was lucky to grow up during an era when the Blue Jays were one of baseball’s best teams, winning two championships when I was in high school and so I am familiar with the feeling that must pervade Boston’s baseball scene these days. The kids who have grown up there over the past 12 years have seen some great players, experienced some incredible odds-defying moments, and, perhaps most amazingly, may have witnesses their parents, grandparents, and even great-grandparents weep with childlike joy. I’m just glad I got to see where all those great moments were celebrated.