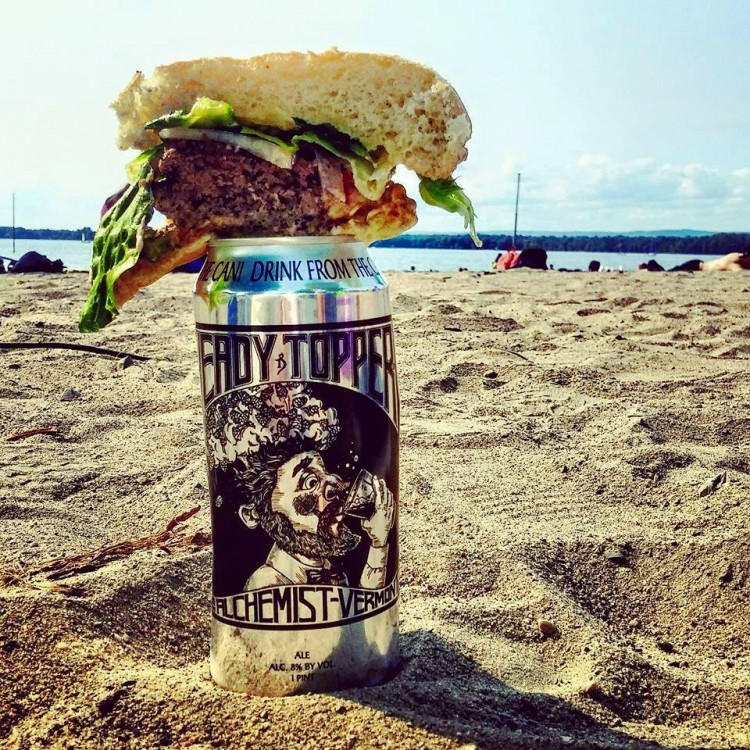 I pulled into the parking lot at 8:25 am, an hour and a half before the Beverage Warehouse in Winooski, Vermont would open its doors. This was the first day of our family vacation to the Green Mountain State and I had decided to wake-up at 7 am, roll out of bed, guzzle two cups of coffee, and hop in our Ford Fusion in search of Heady Topper, considered by many to be the best beer on Earth. With Kendrick Lamaar turned up to 11, I winded my way through the back roads of Vermont on a 50-minute drive to Winooski, a small suburb outside of Burlington, aiming to be one of the first in line to purchase the elusive beer. After arriving to an empty shelf at the Healthy Living Center the evening before, 45 minutes after the beer had been made available, I suspected that purchasing Heady Topper was serious business in Vermont, especially during the week leading up to Independence Day. The Beverage Warehouse is one of only four shops in Vermont that claims to have “Cases Available” on the the Heady Topper website, as well as the unaffiliated but invaluable Heady Spotter site, and so I called the shop on Wednesday for details on the next day’s delivery. My heart sank when the clerk informed me that I should arrive at 8:30 am if I wanted to secure a full case, but my resolved quickly steeled. What for me was ostensibly a family vacation, instantly became a mission to purchase as much Heady Topper as I could find.

I ended up being the 10th person in line, and would be followed by 180 others. “Is this the line for Bud Light?”,  quipped one of the early risers as he took his place in the queue. I was one of the few who showed up with a book to pass the time. For most others in line, this seemed to be the norm, the Thursday morning wait to stock up on beers for the weekend. For the first hour, most of us just leaned against the wall, still waking up as the morning chill subsided. The truck presumably carrying the shipment pulled in at 9:00 am, and the clang of crates being unloaded only heightened my anticipation. The local lady immediately behind me in line began to chastise herself for not arriving earlier, as she explained to the others what I seemed to be one of the few to have known, that the store aims to send everyone home with beer. Those in the front would get a full case, and the amount available would decrease down the line. She suspected that, with the sizable number of shoppers, only the first 3 or 4 in line would be allowed to buy 24 Heady Toppers. I began to worry that I would be heading home with a mere dozen (or fewer). 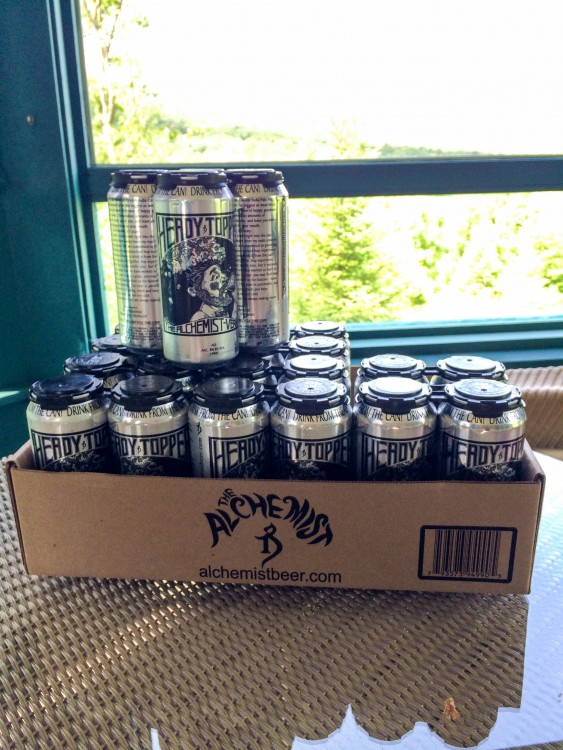 When the doors finally opened, we were lead through the aisles in an enormous queue that made shopping for any other beers impossible. Near the front, I was able to hear the metal door slide up and cases being hoisted up and plopped into the outstretched hands of those at the front. I turned the corner to see a mountain of Heady Topper and as I reached out my arms, heard the words, “Last one to get a full case”. Feeling elated and then guilty for those immediately behind me, especially the lady who had been so helpful in describing the Vermont beer scene to me, I none-the-less marched up to the counter, swiped my Visa and made away with the bounty. The thrill of the chase made me inquire to my new friend if the beer was as difficult to purchase in Waterbury, where I planned to be on Friday and where a number of stores were getting deliveries; she just told me that there would be another shipment to the Beverage Warehouse on Saturday, which would be my best bet to secure another case. ‘No thanks’, I thought, the long morning wait still fresh in my mind. 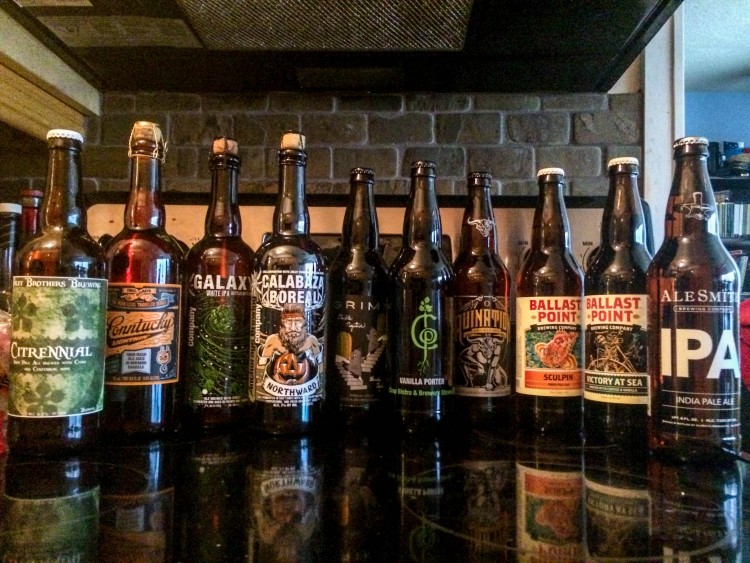 Over the next few days, I would learn just how intense the hunt for beer in Vermont could be. In addition to Heady Topper, Vermont breweries produce a number of renowned beers. On the user-rated list of the world’s top 250 beers on the Beer Advocate website, Vermont brewers place an astounding 14 beers in the top 100, with Heady Topper listed as Number 1 overall. Hillstead Farm Brewery is responsible for most of these beers, but Lawson’s Finest Liquids and Fiddlehead Brewing Company also produce high ranking beers. Lawson’s two most popular beers, the IPA Sip of Sunshine and the Double IPA Double Sunshine would prove to be even harder to obtain than Heady Topper. Double Sunshine had not been released that week, and after making a few calls, I realized that I would not be able to find any Sip of Sunshine unless I dedicated the day to tracking it down and waiting at the shop for the delivery, which I was told would be between 11 am and 2 pm on Friday at the Beverage Warehouse. As for Hillstead Farm, the brewery is located on a dirt road in distant Greensboro, VT, and several of those who waited with me in line for Heady Topper warned that similar lines would face me at Hillstead Farm. All was not lost, however, as a number of pubs around Vermont feature these beers on tap, and I was able to taste Sip of Sunshine as well as Edward, Double Citra, and Conduct of Life # 1 from Hillstead Farm at the excellent Farmhouse Grill in downtown Burlington. While Heady Topper madness prevented me from beer shopping at the Beverage Warehouse on Thursday, I was able to return late Friday afternoon as the kids and Yashy snoozed in the car. The shop features a wider range of beers than any of the stores that we have in Ontario, and I was able to pick up a few other local beers, from excellent start-up breweries like Crop Bistro and Brewery, as well as a number of others from Alaska, California, Connecticut, Michigan, and Belgium.

Is Heady Topper the Best Beer in the World?

Heady Topper is certainly a world class beer. The unusual directions on the rim of the can tell the consumer to ‘Drink from the Can!’ with the explanation on the side indicating that this keeps hop aroma from dissipating when poured into a glass. Meant to be consumed fresh, the beer leaves an extremely pleasant aftertaste and I found myself looking forward to getting back to our cottage every night and cracking open a fresh can. If IPA is your favorite style of beer, Heady Topper, Lawson’s Sip of Sunshine, and Hillstead Farm’s Double Citra are about as good as is gets. On the three main user driven ranking sites Beer Advocate, Rate Beer, and Untappd, Heady Topper is currently rated Number 1, Number 24, and Number 6 respectively. All three lists feature mainly Imperial IPAs and Imperial Stouts, which seem to be the most popular varieties amongst beer lovers. My personal tastes favour Lambic Beers and Bourbon Barrel Aged Imperial Stouts, and so given the choice of any two beers, I would start with a Fou’ Foune from Brasserie Cantillon in Belgium and then open one of Goose Island’s Bourbon County Brand beers, but on a hot summer’s day, Heady Topper might top my list.

What I learned about finding Heady Topper

Searching for Heady Topper is a sport in Vermont. Arriving 10 minutes late for a shipment is often tantamount to failure, and depending on the distance you travel and the time you commit to tracking down and waiting for shipments, to come up empty handed could be hard to take. Travelling with a family down to Vermont meant that I had to limit the time I spent in search of Heady Topper and required me to take some unusual steps (ie waking up at 7 am on vacation). That Thursday morning started pleasantly enough, as I blasted loud music in an empty car on the way to Winooski, and the stress that I experienced while waiting in a long line worrying that I might not be able to purchase very many cans seems silly now, but then again, I won; I was one of the very few who walked away with 24 cans of Heady Topper, asking myself, “What now? What do I do with so much beer?” As someone who never likes to drink the same beer twice in a row, I probably didn’t need a full case, and will be sharing a few cans with fellow beer lovers back in Toronto, but the hunt was fun, and here are the resources I have to thank:

Heady Spotter – This site maps out the daily deliveries and includes links and phone numbers to the stores and bars stocking Heady Topper. A Twitter handle also retweets mentions of #headytopper and #headyspotter that relate to the hunt.

Roam Mobility – Coming from Canada, I signed up for one of Roam Mobility’s daily text, talk and data plans before going to Vermont and while the coverage was a little spotty in the mountains, I had full coverage in Burlington and was able to call around to the various shops receiving deliveries to find out any product was available. At $3.95 CA per day, which includes unlimited talk and text, plus 400 MB of data, the package is a great deal.

Winooski Beverage Warehouse – The scene of my victory, the Beverage Warehouse gets a substantial shipment of Heady Topper on Tuesdays, Thursdays, and Saturdays at 10 am and on Wednesdays at 8 am. After making a few calls, I found this store to be the safest bet to secure Heady Topper. The store counts the number of people in line at the time of delivery and ensures that everyone walks out with at least a 4-pack.

Now I’m off to enjoy one!