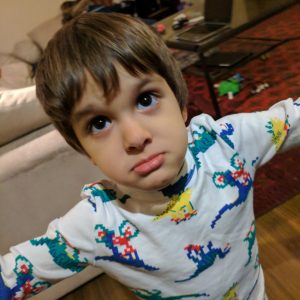 You may have been reading about the struggles we have faced in potty training our Little Man. He showed some interest in using the toilet after we told him that he would need to use the potty if he wanted to join his big sister at school, but that motivating factor seemed to have failed. Then, as we encouraged him daily to sit down and try to use the potty, he started to get more and more angry, and more and more obstinate about keeping his diaper soiling habits.

I gave up. My thinking was that he would eventually follow his sister’s lead and one day have an epiphany. Until that time, I felt like I didn’t need the headache. Yashy was a bit more dedicated than I, but was clearly getting frustrated too. With our family planning to hit the road for the next six months, I figured that he would learn over the summer, and eventually get too old to feel comfortable in diapers. Then, the unexpected happened, twice.

About a month ago, we registered the Little Man to start Pre-K next September. Part of the registration process necessitated that we visit the school with copies of his birth certificate, baptismal certificate, and his all-important vaccination record. The visit would be quick but we decided to bring him along to help him prepare for the big change he will experience in the fall. As he has never been in daycare, we are somewhat worried that the transition will be a difficult one. Thankfully, his big sister will be there to ride the bus with him on that first day, but any time we can bring him into her classroom, we seize the opportunity. We are always eager to show him all the fun activities he will soon get to do at the big school. He has even met a few of his sister’s friends.

After the registration visit, can you guess what happened? Within a few days, the Little Man started wanting to go to the potty, and his skills improved quickly. Soon, all number 2s were happening on the toilet, and with a little encouragement, he was peeing there regularly. Then in an effort to get him to be more consistent, I told him that if he went 7 straight days days without peeing or pooping in his diaper, I would buy him a new Star Wars figure to go along with his coveted Darth Vader toy. He had a couple more inconsistent days but then reeled off several straight days of potty going that left me, quite frankly, amazed. I soon lost count, but after what must have been about 10 days, I told him that after one more day, he would have earned his new toy.

When that day arrived, we headed over to the Disney Store. I had scouted the store the day before to see the options and found a number of Star Wars action figures, including Han Solo, Kylo Ren, Rey, and Finn, all characters he was growing to love after a few recent viewings of the Force Awakens, the latest Star Wars movie. He had been impressed with Rey, especially after seeing her defeat Kylo Ren and so I was secretly hoping he would go for that character but knew in my heart that Kylo Ren would be the one. Sure enough, he noticed it right away and picked up the box to studiously examine its contents. Luckily, the figurines were buy one, get one free, and so I picked up the Rey and told him that he could get both as long as he shared with his sister.

Off we went to the cash when the unforeseen wonders of the Disney Store foiled my plans. Just as we were about to get in line, a four foot display of Toy Story dolls stopped him in his tracks. At home, he is always playing with the talking Buzz Lightyear doll his grandparents gave him last Christmas, and now, here before him was Buzz’s friend Woody. And here before me was my next parenting opportunity. Having promised him one reward for his potty training success, I was now able to provide him with the chance to make an important, impactful decision. Would it be the Kylo Ren and Rey action figures, or a talking Woody doll that looked to me like the very one whose adventures I have watched dozens of times, complete with a string hanging out his back than initiates a revolving series of phrases? 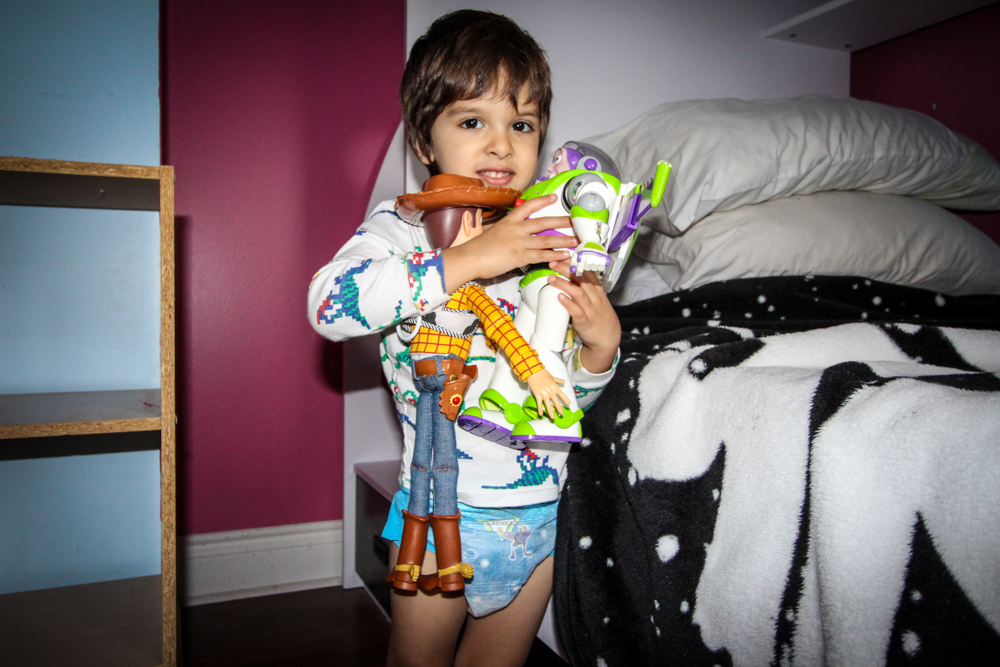 After one pull of the string, “There’s a snake in my boots”, filled the Little Man’s ears and the choice was made. Woody it was, and off we went, rushing home to introduce Woody to Buzz. For about 2 hours, bliss filled the house. The Little Man was excitedly playing with his new friend, even giving his sister the chance to pull Woody’s string a couple times. Then, disaster struck.

Two hours of play and the novelty wore off. No longer was Woody the darling of the playbin. Memories of Kylo Ren and Rey came creeping in. An idea was formed; a demand was made.

I explained to him that he was given a choice, and that he had to stick with his decision. He then asked to take Woody back, saying that he didn’t like him. I told him it was too late. We had removed Woody from the box and could no longer take him back to the store. The tears arrived. Thankfully, Woody still talked, remained a cool toy, and so things didn’t seem awful in his world, but a change had taken place and our comedy of errors was soon to begin.

As we settled in for storytime that night, a familiar smell permeated the air, and what did I do, I blamed it on the big sister, accusing her of ‘tooting’, to which she admitted! A few minutes later, I am brushing the Little Man’s teeth when I smell it again. Since his sister is standing there watching us, I once again blame her, and then blame her a third time in the living room five minutes later. I thought we had won, that the Little Man’s days of pooping in his diaper were behind us, that my brilliant reward would reinforce his good behaviour, but we didn’t win. The smell was coming from his Pull Ups and it didn’t even occur to me that this was a possibility.

The next day, he did it again, and then again the next day. I bought the toy 5 days ago today, and as I write this, he has just come up to tell me that he has pooped in his Pull Ups again. What happened?!? Did I traumatize him by getting him to choose his reward in little under a minute at the Disney Store? He still loves the Woody doll, but he has lost his focus. He’s back to going to the potty on every second or third movement. Was this setback inevitable? What do we do now?

Looking back, I have formulated a couple theories, though of course I am not a child psychologist. My parental work involves a lot of trial and error, and here is my plan for next time.

This is not the first time I have exposed the Little Man to the sensory overload of the toy store. Last fall, I initiated a meltdown when I brought him into Chapters to look for a book and he spotted a Paw Patrol toy set in the middle of the store. That was a fail, but I did have success a few months later when I took him to Toys R’ Us to look for a Luke Skywalker, which I told him he would receive once he used the potty all the time (this was my first attempt, before I quit trying). On that day, we didn’t find Luke Skywalker and I was able to peacefully remove him from the toy store after showing him that Luke was not there.

What I should have done at the Disney Store was to tell him what the store would have and then stick to the original idea of a Star Wars toy. By letting him know that the shop had Kylo Ren, Han Solo, Rey, and Finn, I could have asked him to choose one beforehand, setting proper expectations for the trip as well as the return home. Changing plans may have been a bad idea, and when he saw the Woody, the right thing to do would have been to tell him that he could ask for that doll for his birthday.

I don’t know if this would have worked, but it’s going to be what I try to do next time. Had this been my original strategy, perhaps he would still be going to the potty, but then again, this might be the next phase of the journey. He tried really hard for a week to maintain potty diligence, but perhaps it wasn’t he ideal time, regardless of the reward I offered. The fact is, we are still trying, but we feel better than we did at this time last month, when we were beginning to suspect that he preferred using a diaper to the using the potty, and that we would never succeed in getting him ready for Pre-K. At least now, we have hope. A New Hope. 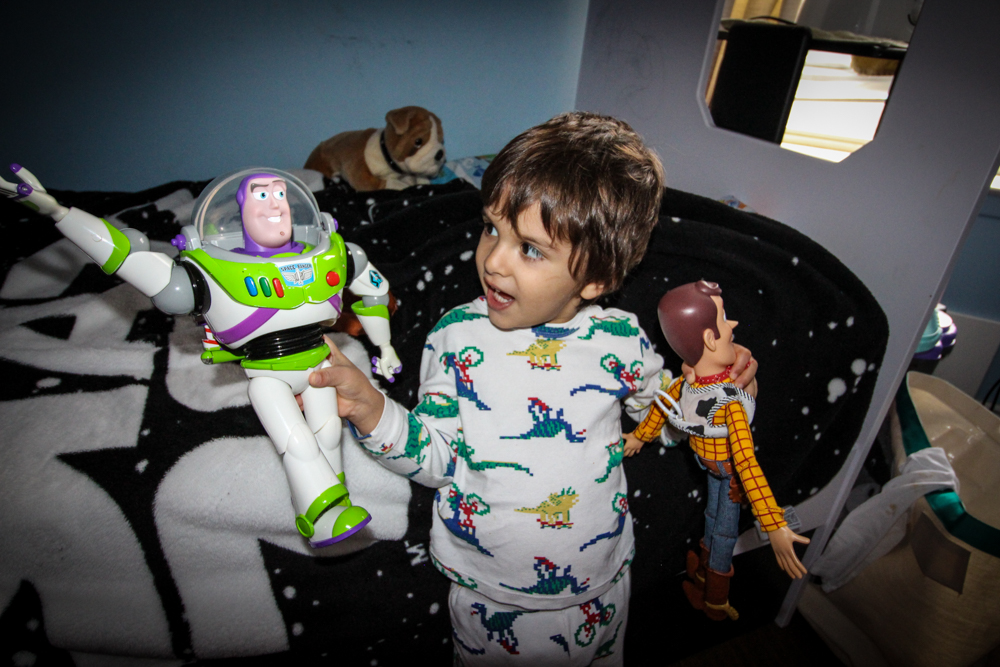