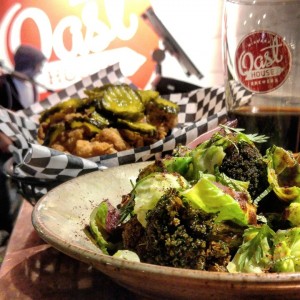 As you know we frequently find ourselves in Niagara on the Lake thanks to the comforts of my parent’s B&B in the off season. In the last year, I’ve probably stayed over on eight different occasions and each time you’ll hear me tell my dad ” THIS is the trip. I’m going to eat at Oast House”. I said it so often it became a bit of a joke at Blue Skies B&B. You see, I made it to Oast House on each of those visits, but not once did I time it with El Gastrónomo Vagabundo’s stint in the kitchen. All that changed on my most recent visit-thank goodness!

El Gastrónomo Vagabundo is brought to you by Australian chef Adam Hynam-Smith and his Canadian partner Tamara Jensen. During my second visit (yes I was so thrilled about finally catching them that I went for back to back visits!) I met Chef Adam and he was not only friendly but also beaming with pride as he told us about how their ingredients are sourced from local organic and free range farms, as well as local independent suppliers. These guys live and breathe community! 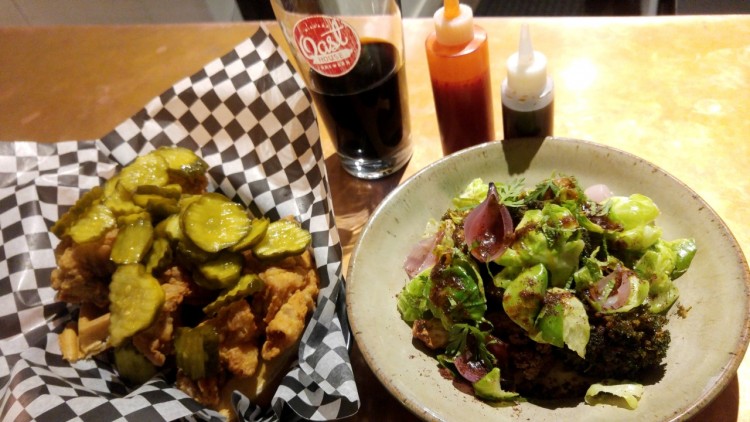 While El Gastró may have its roots in the food truck movement, they spend their winter months doing pop ups and continue showcasing their ever changing menu of globally inspired gourmet cuisine. One Friday evening in Niagara on the Lake, the hubs and I told my parents we were popping out to grab a couple  Growlers while my mom prepped dinner for us all. Well let’s just say, I came back an hour later with my belly filled with Oast House Milk Stout, El Gastró’s Chicken and Waffles (which came with pickles!!) and their Brussels sprouts salad. My mom wasn’t pleased but I was happy as ever! There’s a certain charm to Niagara on the Lake and for me a visit to Oast House is always a must. I usually time it around the live musicians that pop up on weekends and this time I had food to pair it all with. Also, if my mom made her veggies like El Gastrós, I’d have been eating a lot more veggies growing up! Just sayin’

We had friends visiting us from the states the next day and so I decided that the beer lovers had to pop by Oast House… well guess who was still in the kitchen? Oh yea! El Gastrónomo! This time I opted for the one dish that filled my dreams the night before, the foie gras. You see, Foie Gras is one thing I MUST order each time I see it on a menu and so I was pretty disappointed that my stomach wasn’t able to squeeze it in last night…which is why I ordered it this time around.

I definitely give it a “pretty dish” vote and yes OF COURSE I licked my plate clean AND was thrilled with the adequate bread that accompanied the dish (you know my views on the lack of bread usually with this dish!). The radish were also a nice touch, that’s for sure.  Both times the kids weren’t with us, but they have visited Oast House on numerous occasions and because it has such a casual vibe, no one cares that there’s kids around. The back room with the ping pong table is Little Monkey’s favourite hang out there. I should mention that there’s only a few bar stool tables and the place can be rammed when the kitchen is in full swing, so don’t be surprised if you find yourself huddled in the corner as you try to savour the deliciousness!

If you’re visiting Niagara on the Lake over the weekend, be sure to time it around an El Gastró pop up. I hear they do some awesome pairing dinners with other breweries in the area (here’s looking at you Silver Smith) and  oh yes, your best bet is to follow them on Instagram and Twitter to keep track of these gourmet nomads’ whereabouts!