Note: This is the third entry in a series of posts looking at the Kid Friendliness, Entertainment Value, and Life Lessons for Kids from the Disney Princess movies. Previous posts covered “Snow White and the Seven Dwarfs” and “Cinderella”.

“Sleeping Beauty” is a unique Disney movie. If you simultaneously projected the original reels of the Disney Princess movies side by side, “Sleeping Beauty” is the film that would display most vividly. The film’s backgrounds were hand painted, each taking about 7 to 10 days to complete, and shot using 70 mm cameras, giving it an IMAX-like quality if seen in the original format. The painstaking processes used in the early Disney films are now eschewed in favour of computer animation, and so “Sleeping Beauty” is a rare visual treasure. Should a 70 mm print of the film ever show up at your local movie theatre, I would highly recommend seeing it. Filmgoers are presented with few chances to see the depth of colors the format has to offer.

Despite its visual beauty, the film itself is a little lacking in some of the elements that have defined the greatest Disney films. Unlike the previously released “Snow White and the Seven Dwarfs” and “Cinderella”, the film does not have musical numbers that encourage kids to sing along. While the movie does use music from Tchaikovsky’s beautiful ballet of the same name, contributing to the operatic tone of the movie, this music is more of a treat for adults than kids.

The three Good Fairies have an impressive array of magic tricks but, rather than serving as Aurora’s sidekicks, the fairies play more of a motherly role. Because of this, Aurora’s personality is not revealed very well, and she is presented as a helpless heroine only looking to fall in love. Abandoning these outdated ideas of gender roles has been an important shift in the modern Disney Princess films, which present the princesses as strong, adventurous heroines. Aurora’s interactions are limited in the film and she spends the final act in a deep slumber.

The most engaging scene occurs in the cottage as the three fairies resolve to use magic for the first time in 16 years, using their powers to make Aurora’s dress and bringing the mops and buckets to life to help clean up – very reminiscent of “Fantasia”, which is one of the problems with the film. Many of the elements feel like a rehash of ideas from Snow White and other earlier films, with Aurora singing to animals and awakening with a kiss. 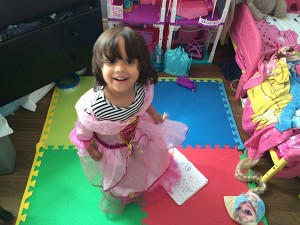 Maleficent is a frightening villain, and the film’s dark visuals create an ominous tone at times, especially during the film’s climactic scene in which Prince Phillip (the first Disney Prince to have a name) battles Maleficent in dragon form, but The Little Monkey has never seemed to be too frightened of anything in “Sleeping Beauty”. The film is one of her least requested Disney movies and so she may find it a little boring. Princess Aurora is a drab character, like Snow White, and the film mainly centres on the three Good Fairies, Flora, Fauna, and Merryweather, who provide little comic relief for kids, and, perhaps most importantly, don’t wear glamorous dresses. The main concept she enjoys from the film is sleeping for a 100 years, which we realized one morning when she woke up and indicated that she had herself just slept for a 100 years.

One of the biggest difficulties my daughter has with the Disney films is understanding the motivations of the villains. She comprehends that they are bad characters, but hasn’t quite grasped why. This gives me a chance to talk with her about  these scheming villains and point out the repercussions of their actions. Maleficent, who is one of the most frightening realized Disney villains, lashes out after her pride is wounded upon not being invited to the celebration of Aurora’s birth. Her pride has clearly left her lonely and friendless.

The film turns when the Good Fairies decide to use their magic and begin fighting over the the color of Aurora’s dress. As the fighting escalates, the turmoil leads Maleficent’s raven straight to the hideaway where Aurora has been kept hidden from Maleficent for 16 years. The scene gives me a chance to teach my kids to play nice, so as not to attract others who are looking for a fight.

The Good Fairies also make a strange decision in wanting to hurry back to the castle on Aurora’s 16th birthday. Had they not been in such a hurry, and waited until the sunset, Maleficent’s curse would have lapsed. Though it’s often Yashy and I who need to hurry the kids along anytime we need to leave the house, patience is an important virtue to teach young kids.

“Sleeping Beauty” marked the end of an era for the Walt Disney corporation. After the success of “Cinderella” in 1950, the studio looked to the classic tale to continue its run of fairy tale hits, but despite starting production in 1951, the film would not be released until 1959, and the high production costs made it the most expensive Disney film to that date. Like many of the Disney films from the era, the film was considered a box office disappointment during its initial run but reissues through the years eventually made it one of the top 50 grossing movies (adjusted for inflation) of all time.

After “Snow White and the Seven Dwarfs”, “Cinderella”, and “Sleeping Beauty”, Disney would not produce another princess fairy tale for the next 30 years, well after Walt Disney’s death. An entire generation of the boys and girls grew up with limited awareness of Disney animation. All that would change with “The Little Mermaid” in 1989, coming next week.