I was 8 years old when George Bell caught the ball that clinched the American League East championship for the 1985 Toronto Blue Jays. In those moments, while witnessing the catch and the ensuing celebration, my lifelong love of sports was born. Eight years later, Joe Carter hit the home run that would give the Blue Jays a second straight World Series, and by that time, the Toronto Blue Jays and their winning ways had established themselves in my life as an uninterrupted concern. Those were the good ole’ days.

Despite some tough times for the Blue Jays over the past 22 years, I’ve never stopped following the team. After moving to Toronto 10 years ago, I was excited for the opportunity to attend live ball games at the Skydome Rogers Centre. A friend and I took advantage of a deal that secured us 10 Upper Bowl tickets for $99 one summer and made our way to the ballpark to regularly catch a game. When the kids came along, I grew excited for a new chapter in my life as a Blue Jays fan, as a proud father raising two young fans while teaching them about the history of this once great ballclub.

Taking the Kids Along 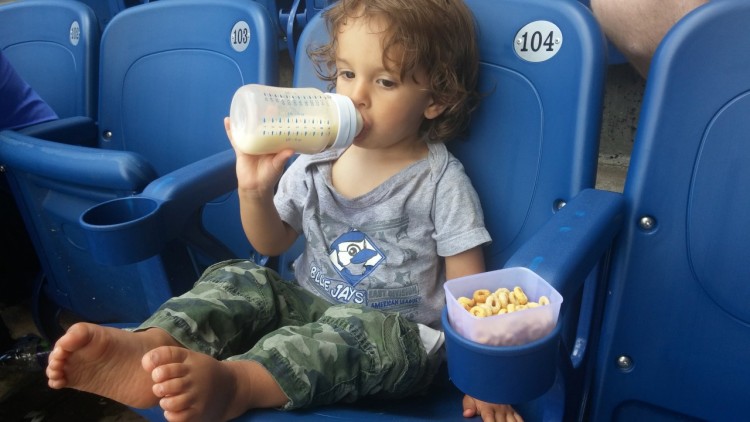 We brought the Little Monkey to a game when she was a little over a year and a half old. She was captivated by the crowd and provided a cute alternative to watching baseball for the fans in our section. We skipped the next season with the Little Man still a bit too young for the loud sounds at the stadium, even when only half full, though we did bravely take him to a Raptors game in his infancy. This year, we were ready to go back . We had all the gear, each sporting our own Jays shirt, and secured first row tickets in the 200 level section of the outfield. A couple friends with a 6 year old burgeoning Jays fan joined us, and on one of the hottest days of the summer, we sat overlooking the field on a weekend afternoon in June. The atmosphere at the game was exciting, but not electric (this was about a month before the team went on an unprecedented hot streak). Between Yashy and I and the couple with us, we had enough candy and juice to last the afternoon and sitting in the first row turned out to be a godsend since the space between the seat and the short wall in front of us gave the kids plenty of room to play around. The wall is also high enough to prevent toddlers from climbing over, which is a good thing since the drop is about 15 feet.

We attended on a Sunday afternoon, but the best time to take kids to a Jays game is on Junior Jays Saturdays when a number of sections are designated as Jr. Jays Zones and feature artists, games, and activities, depending on which zone you visit. Kids under 14 can also purchase special priced tickets in the 200 and 500 levels. Perhaps most exciting of all, the kids are allowed to run the bases like a pro after the game – just be warned that the occasional game goes into extra innings, stretching the game time past the usual 3 hours. A friend brought his children to a game last year that lasted 6 hours and his kids were willing to wait it out. The Blue Jays mascots, ACE and Junior (giant Blue Jay of course), are also at the games to entertain the little ones. Little Monkey needed a break (as did Yashy) and so off they went to hang out by the WestJet Flight Deck which has a water cooler (definitely bring the sippy cups and bottles), a Goose Island beer stand and much needed shade during the hot days. Parents can watch the game from here while the kids roam about the empty(ish) space. Yashy recently stumbled upon a WestJet Flight Deck Home Run Contest, so be sure to enter! 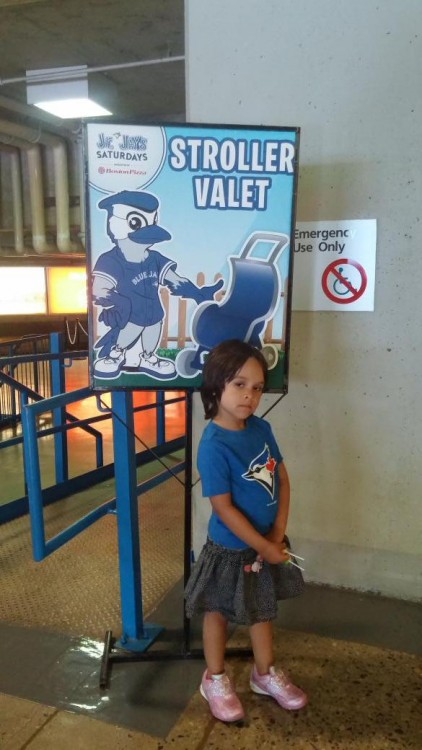 When it opened in 1989, the Rogers Centre was the envy of all of baseball. It’s retractable roof allows the field to be open when the sun is shining and closed on cold, rainy days. Despite its size, navigating the stadium is fairly easy, with three circular levels labeled 100, 200, and 500.  Most of the male and female bathrooms have change pads and ample space if you visit while the game is in play. Gate 7, located along Bremner Blvd. on the South side of the stadium is designated an accessible entrance, and those with strollers can easily get into Gates 5, 6 and 11 as well. There’s designated stroller parking areas as well.

On that afternoon, we got a glimpse of the potential greatness of the 2015 team when they clawed back from a 7 run deficit in two innings. Alas, the pitching struggles that were keeping the team from seriously competing for the division were evident on this day, with the Jays eventually losing 13-9, lowering their record to 37-34. The Jays would stumble through the next 32 games before rocketing to the top of the division. 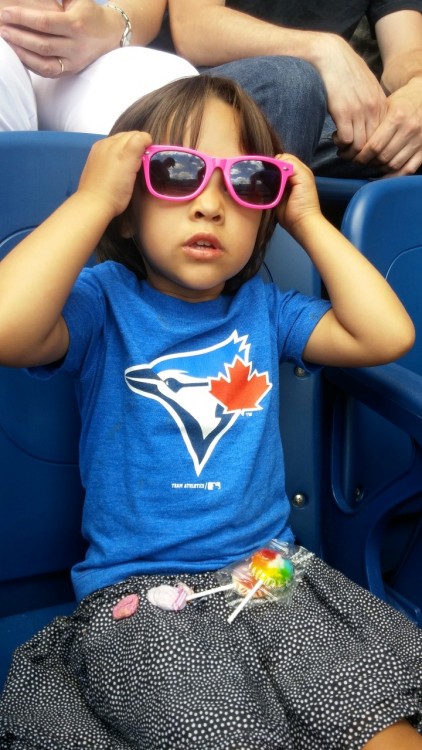 In the 22 years that have elapsed since Carter’s thunderous shot, the Blue Jays have not been back to the playoffs. At that time, only 4 teams in the entire 28 team league made the playoffs. Last year, the league expanded to include 10 of the league’s 30 times. Still, the Blue Jays could not make their way in. This year, the Jays are finally winning and are a virtual lock to make the postseason. The citizens of Toronto are frantic. I am too. On a recent trip through the Eaton Centre, I picked up a Blue Jays hat for the Little Monkey. She likes it because it also has Minnie Mouse on the front.

The city is now littered with fans sporting Blue Jays hats and jerseys, but Toronto is not the only city affected. At a recent game in New York against the Yankees, baseball’s most famous franchise and the team currently in competition with the Blue Jays for the division lead, Yankee Stadium in the Bronx was overrun with Blue Jays fans. The Blue Jays had taken a lead and were up by 7 runs when the Yankee fans began to leave the stadium on the rain soaked afternoon. By the end of the game, only Blue Jay fans remained, speckling the stadium seats in the same manner they did on Toronto 5 years ago, when the team was losing and attendance was low. The scene may have been similar but the setting was vastly different. Blue Jay Mania is spreading, even south of the border. Let’s Go Blue Jays!