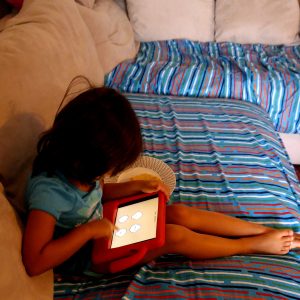 A few months ago, our family visited the MaRS Innovation Centre for an open house. The evening event featured displays from a number of the exciting start-ups operating within Toronto’s burgeoning entrepreneurial scene. We arrived and were quickly pulled into the future, immediately discovering teaBOT, a remarkable device that produces thousands of possible tea blends at the press of a few buttons. As we sipped our delicious concoctions, we did some exploring and signed up for a tour of the Facebook office, which fills the top floor of the building. While waiting for our tour to start, we visited the team at Ooka Island, producers of an App that teaches children to read. In chatting with the team, we could see the passion they had for the project, and we were delighted when they gave us a reading package and subscription that we could try out. And, this week, while celebrating Yashy’s birthday (finally!), we have another giveaway for you!

Disclosure : This post is in partnership with Ooka Island but, as always, opinions are totally ours! 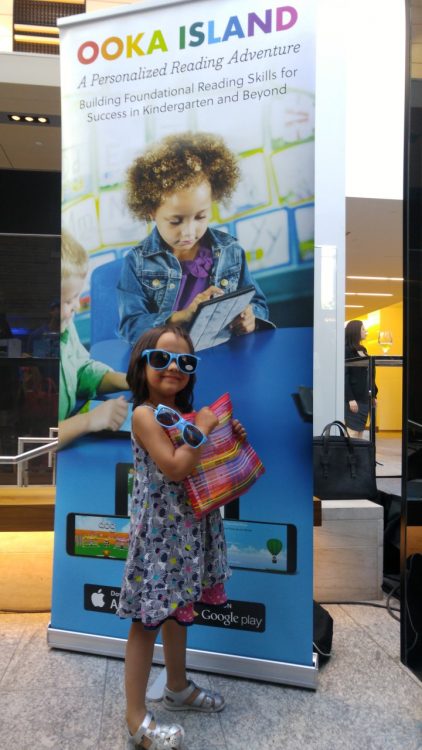 What immediately grabbed me about Ooka Island was its combined use of paperback reading materials and an App for Android or Apple iOS. We’ve had our struggles with tablet use. One of my daily responsibilities is to focus on limiting the amount of time the kids are using their iPads. Within that use, we try to ensure that they are not spending two straight hours on YouTube, that dark cave of colorful wonders and addictive kids songs. With Ooka Island, I was excited to offer Little Monkey the chance for interactive learning with her tablet.

With the app installed, the two of us sat down to get started. After I signed up for an account, I let her take the wheel to see if she could guide herself through the learnings. She quickly intuited the direction to take, helped along by arrows and easy to understand spoken instructions. The app guided her through various stops on Ooka Island, introducing each section with a short animation before bringing her into a more interactive experience. At the initial stop, Little Monkey was asked to identify sounds while riding along on a roller coaster. Later, she jumped from rock to rock to follow a trail of letters in alphabetical order. On that first day, I gently guided the Little Monkey through the stages. After that, she continued on her own. Every time she signs on, Little Monkey chooses her avatar, selects her picture password, and then follows the arrows, nothing this four year old can’t handle. The app is built to grow with your child and targets pre-k (3 years) to Grade 2 (7 years). The Island truly is built on research and innovation, and the team has combined 25 years of research and scientifically-proven methods to teach children the skills needed to become a confident reader.

The next time I sat down with her, after she had used the app a few times on her own, I could see that she had it mastered. After picking her picture password, she was presented with a Read or Play option, something I hadn’t noticed originally. She choose Read this time and then picked the middle of three options: Read with Us, Read with Zobot, of Read by Yourself. Read with Us provides a description of the scene before reading the words, the Read with Zobot option she chooses reads the story to her and gets her to flip the pages, and Read by Yourself provides a great option for parents to read along with their child to see how he or she is progressing. 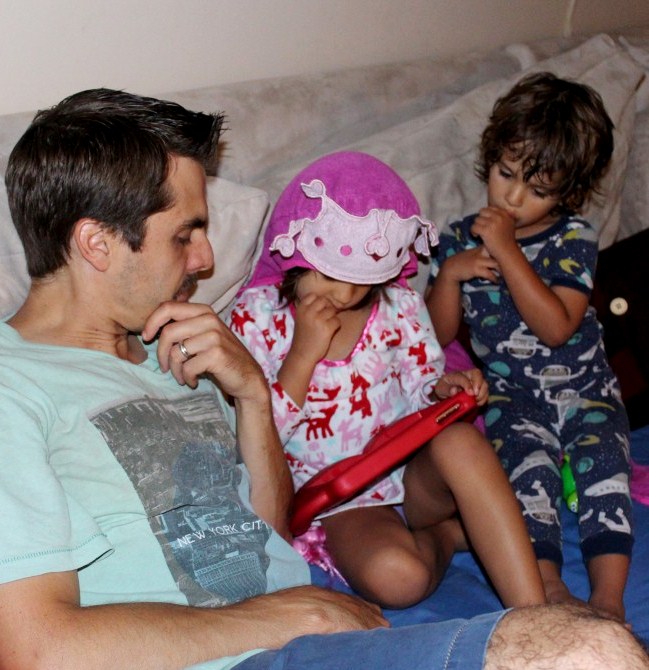 The genius of the app is its lack of critical stop points. Our children can get pretty frustrated on the iPad after hitting a wrong button, leading to a pop up window, pausing the action, cueing a tantrum. Ooka Island doesn’t seem to have any of these distractions. No unnecessary buttons create a pause in the action that would lead Little Monkey to give up and exit the app. Even intervals in which she is asked to steer a skateboard don’t create frustrating lapses in progress when the steering isn’t going so well. Every screen I see in the app contains two to three simple to understand buttons. Using standard indicators like a house, a big X, an arrow, and a curled page, button types I have seen in wide use on kids apps, the app allows children to freely explore and learn how to read along the way. 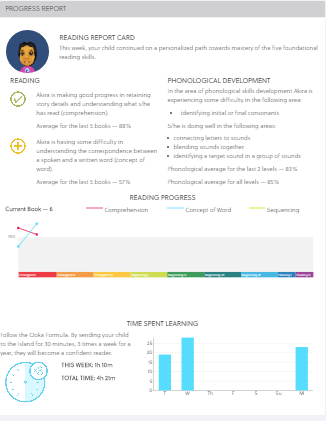 Another great feature of the tool is the weekly progress report I receive, informing me of the number of minutes played, as well as the number of books read and levels played. The reports detail the comprehension progress of the user, outlining where the child is having difficulties and highlighting areas of strength. The most useful feature of the report for me is the time spent indicator. The creators of Ooka Island recommend three 30 minute sessions on the app per week, letting me know when I am falling behind in encouraging her to play. I’ve learnt that it’s difficult to get Little Monkey over the initial instinct to open up Netflix to watch Paw Patrol, but when I ask her if she wants to play Ooka Island instead, she is always excited to play. I am happy to know that I can still play a part in the process!

We have been using the app for 1 month and I am seeing some positive signs. I am a big Scrabble player and the game intrigues Little Monkey. Whenever she catches me playing, she wants to join, and so she and I always have an open game.  In the past, I would tell her which letters to drag onto the board to form a word. Over the last few weeks, I was coming up with a word from amongst the 7 available letters, saying it a couple times and asking her to tell me which letters she needs to use. To my delight, she has started successfully identifying the first and last letters of the word, and she usually does pretty good with the middle letters too. Seems like I might soon have some in-house Scrabble competition.

The Little Monkey is back to school next week, starting Senior Kindergarten, where she will undoubtedly progress her reading skills. However, I am grateful for a tool that will allow me to give her some homework while allowing her screen time on her tablet. Ooka Island is exactly the type of activity I want my kids to be using on a tablet. Baby Boy has already started to sneak in some time on the Island when Little Monkey isn’t around and so we’ll soon have to get him a subscription when he turns three this October! 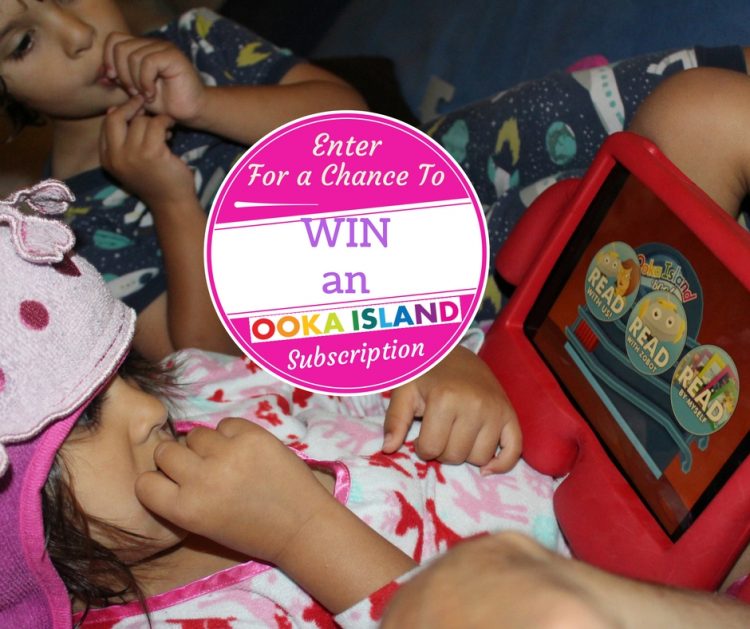 We have a full year Ooka Island subscription up for grabs today. This prize is open to North Americans (void where prohibited by law)!! Good luck and be sure to check out all our giveaways.
a Rafflecopter giveaway