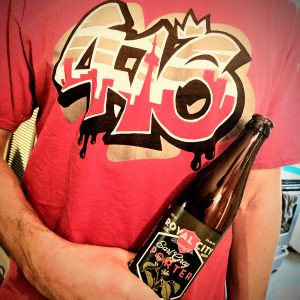 On some days, I feel like the last 5 years of my life has been one long search for beer. When I travel, my only must visit destinations are always breweries or specialty beer stores, and the only thing I usually bring back home is beer. For Christmas and on my birthday, if family asks me what I want, I say beer. And so I am the ideal candidate for a membership to one of the many monthly beer clubs now operating in Canada. I have tried a few in the past and enjoyed the concept of getting beer in the mail. Of late, I have been slowly depleting my beer supply, making it the perfect time for me to try a new service.

Recently, I received two monthly packages from The Brew Box Club, which focuses on many of the burgeoning Ontario craft breweries, most of which have opened within the past five years. The Ontario scene has become pretty competitive, making it easy to overlook some of the younger breweries. Fortunately, Brew Box gives beer lovers an opportunity to discover many of the Ontario Breweries that are either too far away for an afternoon visit or have quietly begun brewing and are fighting for space in local taprooms. The Brew Box website outlines 30 producers on their Featured Breweries page, some as far away as Sudbury, and there are a number listed whose beer I have yet to sample.

The membership I received was the Brewscovery Box, which sends members a selection of beer from at least three different breweries each month. Because this membership offers discounts to those who sign up for 3, 6, or 12 month packages, knowing what to expect is important. Those considering the Brewscovery Box are able to view the monthly allotment from this package going back to December 2014. Looking through the site, I noticed that almost all of the beers they sent are not available at the LCBO and so the club presents a true sampling from some of the smaller batches produced by the featured breweries.

From the moment they get ready to ship your beer you receive email alerts (if you choose to do so) and so you know exactly when your beer will arrive at your doorstep (or concierge desk in our case). The 2 boxes I received each contained approximately 4 liters of beer, as promised on the site, and also included a insert that provided tasting notes on each of the beers. I had seen these breweries on various tap lists around the city but had not tasted any of the beers from 3 of the 6 breweries from which I received a shipment.

Here is a summary of the two months I received. 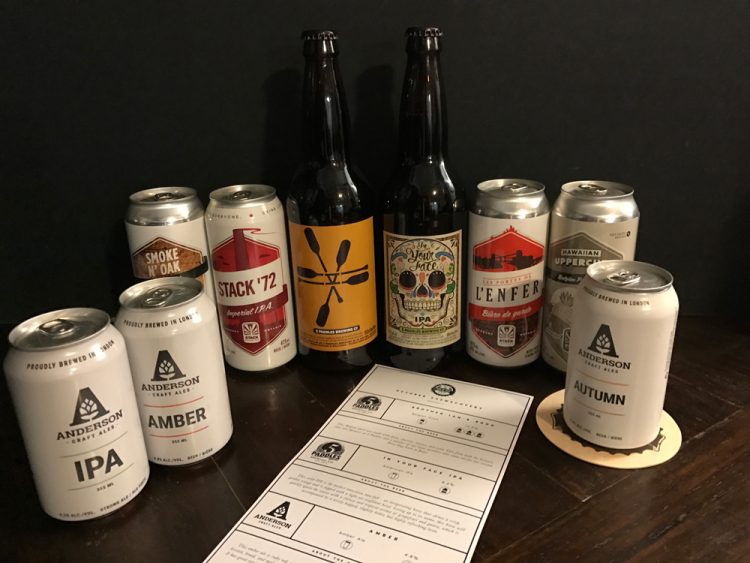 In the first shipment, I received beer from 5 Paddles Brewing, based in Whitby, ON, Anderson Craft Ales out of London, ON, and Stack Brewing from Sudbury, ON. This was a nice shipment to receive into Toronto, as none of these breweries are near the city and all have limited to no distribution at the LCBO.

I was familiar with 5 Paddles from a friend in Whitby. Their website does not reveal much detail on what beers they have produced but a quick look at their Beer Advocate page reveals this group to be prolific brewers, with more than 60 beers rated in a little over 3 years of operation. I love the amount of experimentation going on at 5 Paddles and wish I was able to drop in from time to time. The two beers I received from Brew Box were both good, I’d rate each beer to be about a 7 out of 10 and so this is a promising brewery. They also happen to be doing a lot of barrel aging, my favorite kind of aging!

The three beers from Anderson Craft Ales were all standard beer styles and judging from their web site, that seems to be the focus. That’s good news for those living in the London area who are on the lookout for a new “go to” beer (i.e. the type of beer you would bring as a 6 pack to a friend’s back yard). The Amber Ale was my favourite of the three and I look forward to seeing a few Anderson Beers on tap in the Toronto area.

Stack Brewing was a nice discovery. Belgian Pale Ale and Smoked Ales are both styles that I have always enjoyed and I appreciate Biere de Garde for its unusual, earthy flavours. I can see on their website that their beer is widely available in Sudbury, even at places like Red Lobster and The Keg, and their are a few pubs in Toronto that carry Stack as well, most notably, C’est What. I enjoyed all 4 beers from Stack and will confidently order a Stack brew next time I see them listed on tap. 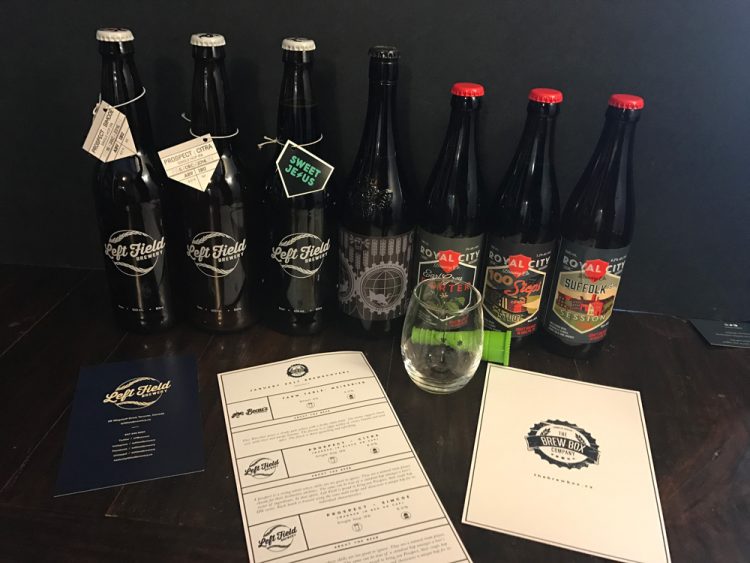 Compared to the breweries highlighted in month one, I was more familiar with those featured in the second shipment. I have previously highlighted Left Field Brewery as one of the best places to drink Craft Beer in Toronto. I had tried all three of these beers in the past. The stout was a little too sweet for my taste, but both Single Hop IPAs were excellent. Left Field is still a new brewery and their beers are steadily improving, which is great news for Toronto’s East End dwellers.

Beau’s is certainly one of the most successful craft brewers in Ontario and they have also been brewing prolifically. Their Lug-Tread Lagered Ale is now one of the most widely available craft beers in the province. While I have enjoyed some of their beers, most notably the excellent Kissmeyer Nordic Pale Ale, many of the Beau’s beers I have tasted have been misses. This Wheat Ale is not something I would drink again but I am always excited to try an unfamiliar batch of Beau’s.

I enjoyed the selection of Royal City beers. The Stout and Bitter were both solid beers and the Earl Grey Porter was quite interesting. The subtle notes of the tea really enhanced the beer, though I felt that the coffee and chocolate notes found in the best porters were not present in this one. I have also had their Hibiscus Saison, which I preferred to the three I received in this package. Royal City is experimenting, which I like, and that will keep me interested in their future offerings.
A few years ago, before the craft beer boom, I tried my first beer club, and while I enjoyed trying the beers I received, I was disappointed with quality of the beers for the price we paid, and felt that I wasn’t getting good value. I couple years later, I experimented with another club that delivered some excellent beer from both Canada and the United States. I was impressed and was happy to recommend the club, which I think is great for those looking to discover out of region beers. The Brew Box is great beer club for local discovery. In addition to the Brewscovery Box, they also offer a Brewthusiast Club that offer rare, high end beers to only 50 members per year, as well as clubs specific to Sawdust City Brewery, Silversmith Brewing, and the aforementioned Beau’s Brewery. If you love Ontario beer, The Brew Box has you covered.