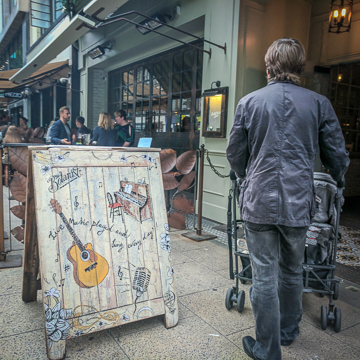 Downtown Manchester is a fantastic place to explore. The area is compact but filled with potential. Our family of four were able to explore almost every corner of the city center in just a couple afternoons. There, we found fun outdoor spaces, a number of great museums, and memorable food and drink experiences. The city’s large pedestrian friendly sidewalks, plus a few pedestrian only areas, gave us the freedom to move leisurely throughout the city with our double stroller, and when we were running low on energy, we were able to take advantage of the free shuttle buses that run through the downtown core.

Disclosure : This post is in partnership with Visit Manchester but, as always, opinions are TOTALLY ours.

As we explored, we had some specific destinations in mind, and we were grateful for those buses with two small kids, but, for the most part, we explored on foot, walking several kilometres each day. And were did we get that energy? By stopping at a few of the great dining options in the city. During our week in the city, we discovered that Manchester is a great city to dine out. We walked by a number of large patios, where the cool, cloudy weather of the city allows diners to enjoy sitting outside without fear of getting heat stroke. Other restaurants we found were multiform establishments that offered both ample seating and intimacy, a difficult combination to find. We ate out a lot in Manchester, and I’ll be sharing the details on the great places we found for craft beer in an upcoming post. Below, I recount three great stops we made for a family meal downtown.

Oast House has a lot going on. Located near the beautiful John Rylands Library, the pub contains a large outdoor seating area in Crown Square that can seat more than 100 patrons, plus ample room in its interior. We arrived at 7 pm on a Thursday to find a lively after work crowd congregating at tables filled with draft beer, some so full of energy that they were standing instead. Inside, we found a large dining area and made our way to a picnic table in the far corner. The kids settled in nicely and it was a good thing they were hungry or they may have gone to sleep on the spacious benches. The world map colouring sheets place mats provided by the restaurant were also a great tool at keeping the kids busy and quiet.

My eye first wandered to the large beer list provided, called the “Anthology of Ales”. The booklet outlines the bottle options available, separating the choices by style. I was intrigued by the Fruit Pale listed, as well as the Dark Ales, but by first choice was one of the sour beers from the Specialty section, which, to my misfortune, was sold out. Other beers were in ample supply, however, and I was able to taste quite a few, including a sample tray of the beers on tap. I had been finding Manchester to be a great beer city, and Oast House kept that impression alive. My favorite on the night was the Einstock, a toasted porter from Iceland that was the perfect after dinner ale.

For a starter, we noticed the Fabulous Fondue option, but decided on the Deli Board, which allowed us to choose four items from a list of ten. It was a little hard to choose, but we went with the Warm Chorizo, Homemade Scotch egg with piccalilli, Houmous, and the Pork Pie with Fig Chutney. After tasting everything, we were confident that we made the right choices. I could have eaten a few more of the scotch eggs and the kids and I especially liked the chorizo. 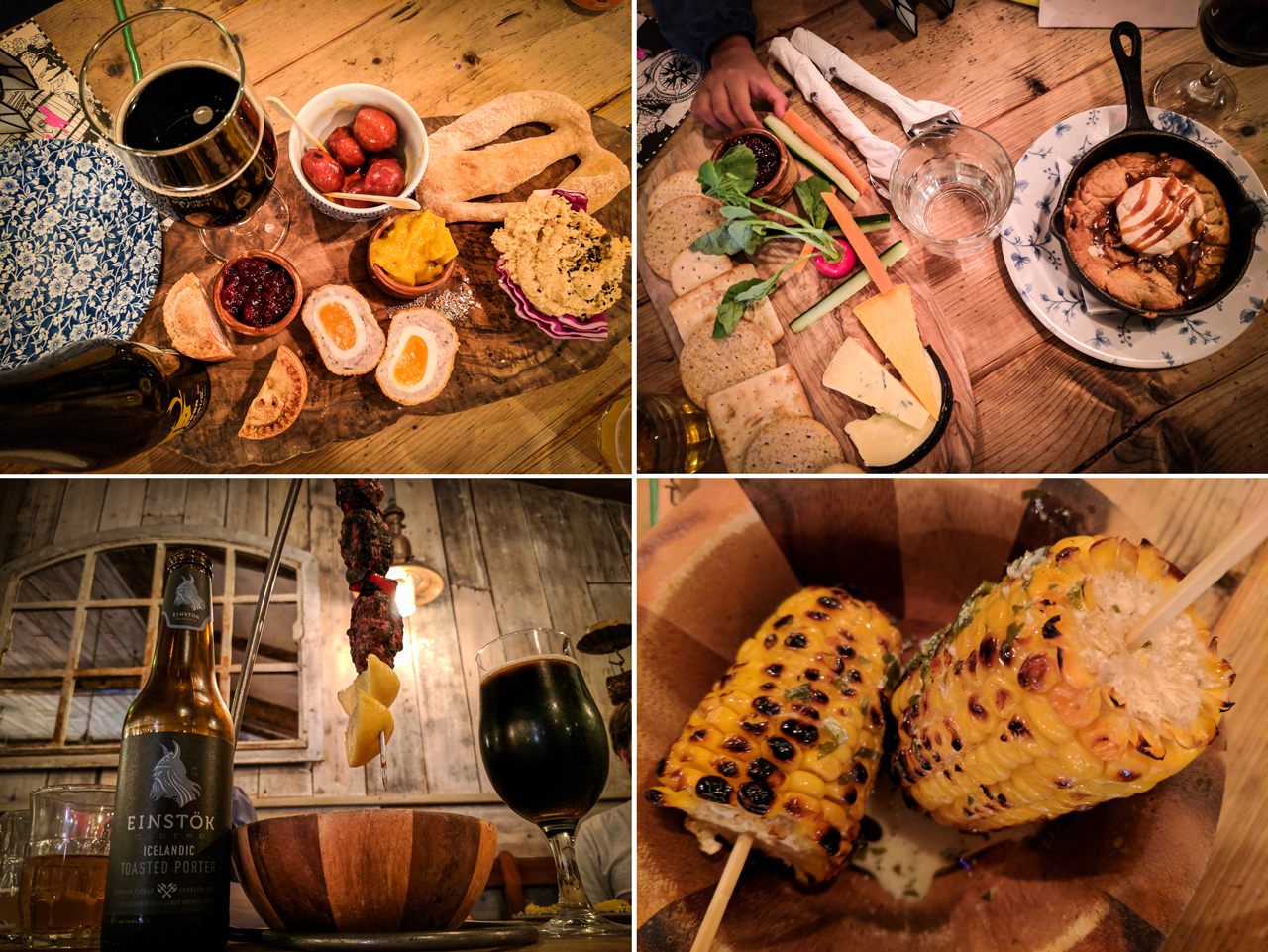 For our mains, we could not resist ordering the Hanging Kebabs™, an Oast House staple (notice the trademark). I’ll let the picture explain the dish better than I can. When these wonders did arrive at the table, our waitress asked if we wanted the garlic butter poured on top of the kebab, to which I could hardly have said ‘no’. She proceeded to drip the butter over the dish using a small hole at the top of the structure, and the liquid rolled down the meats and onto the bed of couscous at the bottom. I had gone with the Jerk Salmon while Yashy chose the Lamb Kofta, which we both agreed was the better choice. With the meal, we had also ordered the delicious Charred Corn on the Cob.

Dessert reached us and Yashy ordered a cheese board. The kids immensely enjoyed the Baked Chocolate Chip Cookie Dough, with salted caramel ice cream and toffee sauce, while I sipped on my toasted porter. Filled and ready for bed, we made our way outside to find a band setting up for the evening. Seemed like a place we could have enjoyed well into the night.

On Sunday afternoon, we stepped into the Refuge Dining Room by Volta. It was Pride Week in Manchester and the city was filled with colorfully dressed revellers, a few of whom were spending the afternoon drinking cocktails in Refuge’s large indoor space, which contains several sections. The main feature of the Sunday menu is the Roast Platter for Two, which naturally, we ordered, in addition to Smoked Feta, Beetroot, Hazelnut, and Dill spread as a starter. Refuge offers a kids menu and so we order a kid’s hamburger as well as Salt cod croquettes meal, which I was secretly hoped they would dislike, leaving more for me. No such luck however. Despite being reluctant to try the croquettes, kids being kids, hunger slowly took over and they eventually finished them off. 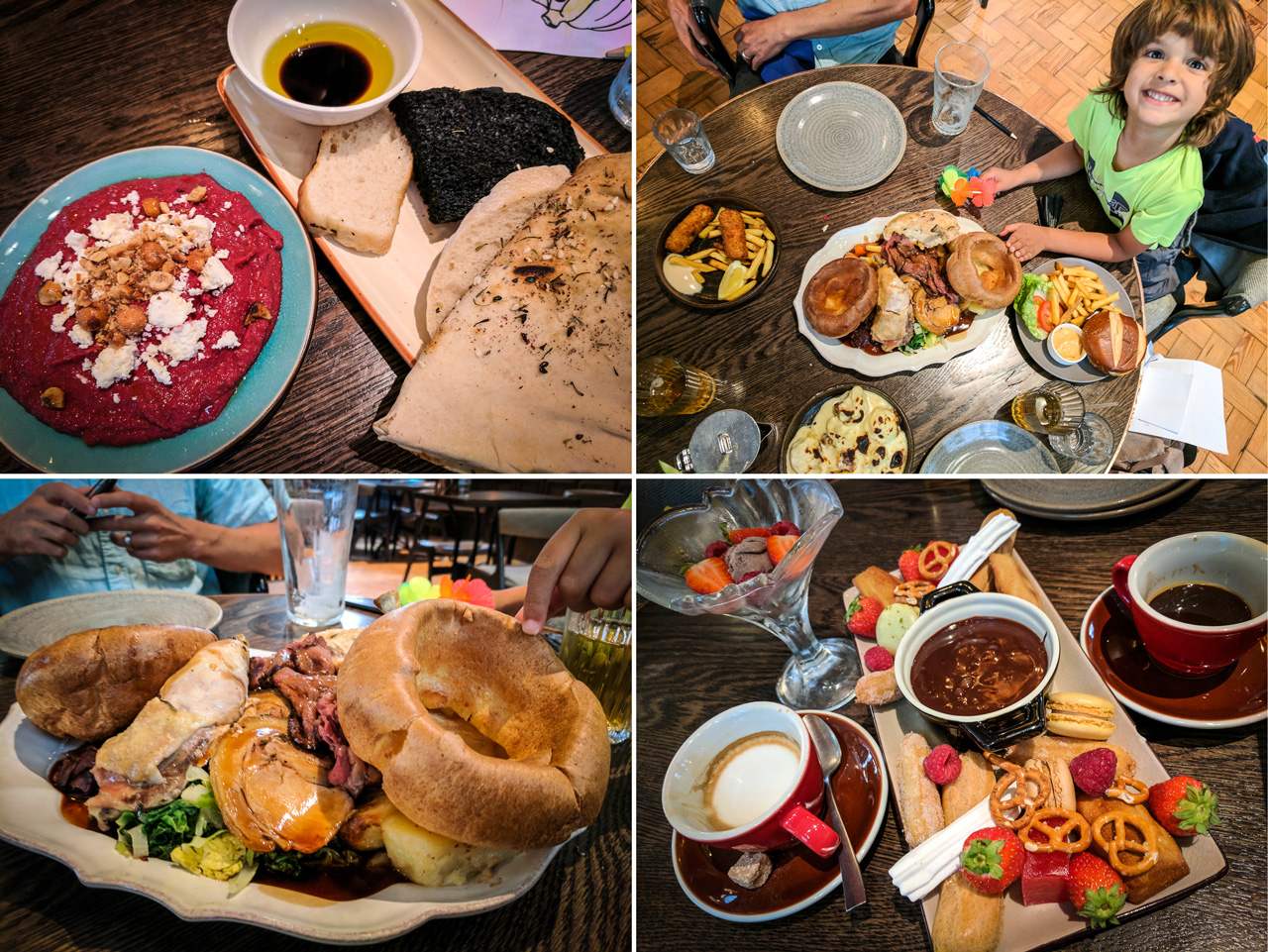 The beetroot spread we started with was the highlight for me. I don’t like feta and so I pushed the cheese to the side to enjoy the spread, along with the great selection of breads that were placed on our table. We had been indulging in some hearty foods in Manchester (see Oast House above), and this spread felt like a return to healthy eating. Then, the Roasted Platter arrived. On it, we discovered chicken, roast beef, pork, potatoes, Yorkshire pudding, etc. The list goes on. It was more of a platter for three or four than for two and so I would highly recommend the dish if you have arrived with an appetite. We did what we could to finish the impressive spread of meals and vegetables but also saved room for the Old Fashioned Chocolate Fondue.

Throughout the meal, we also order a few cocktails and craft beers. The cocktail menu is impressive. Refuge gives the impression to those who enter that it’s a place where a good cocktail is sure to be found. The craft beer list, while not extensive, is large enough for an evening of sampling and the Camden Pale Ale I had on tap was excellent.

On our last night in the city, we dined at The Botanist, which is a more intimate setting than Oast House and Refuge, giving our family the chance to sit back and enjoy one last great meal in Manchester. I sat down to discover that the restaurant offers the same “Anthology of Ales” menu I had browsed at Oast House, and to my good fortune, the sour beer that had been sold out there was in stock here, Wild Beer Co.’s Modus Operandi, and it was delicious. Plus, The Botanist also offers alcohol free cocktails, and by the end of the meal, the kids had finished off three of them. Yashy enjoyed a couple cocktails which she mentioned were made very well and the presentation (served in planters or with smoking test tubes) was top notch.

We started our meal with the Creamy Truffle Mushrooms, Crispy Calamari, and the Crispy Whitebait, which are small, battered fried fish. The highlight was the truffle mushrooms, because when are truffles not the highlight? The Whitebait was a surprising hit with the kids. The calamari was not the circular fried variety that we are used to, which is our daughter’s favorite, but she still polished them off, even though the batter kept falling off the squid. 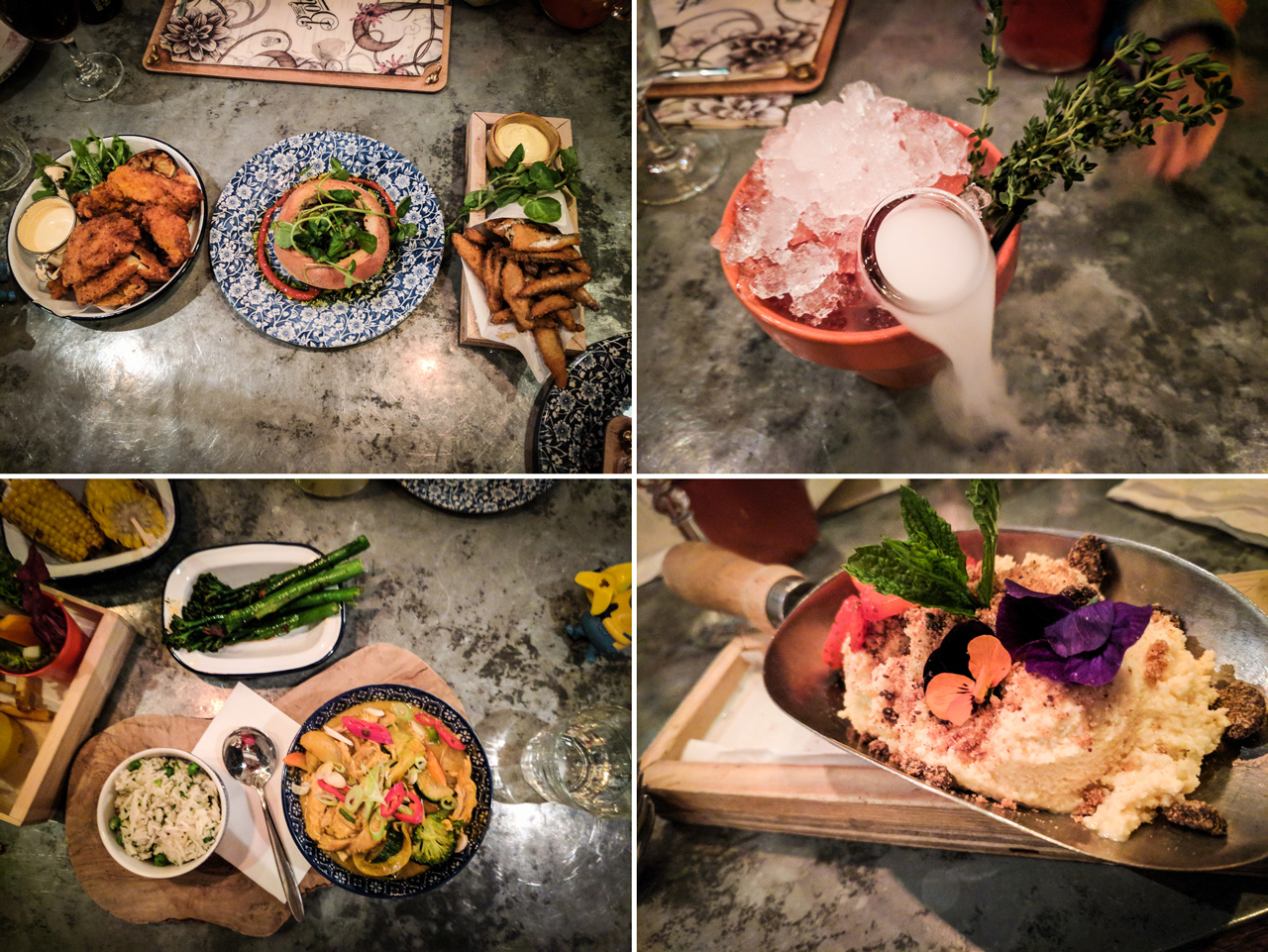 The kids each ordered the chicken fingers for mains and these were good ones, crunchy and succulent. They also came served in mini sand buckets, which were a hit with the kids. The menu featured a few intriguing pie options, but I went with the Malaysian Curry, from the Home Comforts section of the menu. The options at the Botanist are wide ranging and very appealing. I think it would be hard not to find something you like at this restaurant. I had to narrow down my choice from 5 selections that I really wanted to try, making me realize why I love tapas so much. Yashy choose her entree from the Barbecue section, going with the 10 oz Sirloin, which was served with with a roasted mushroom, plum tomato, watercress, and fries.

After finishing the ice cream that came with their kids meals, The Little Monkey and Baby Boy helped Yashy with her large dessert, the White Chocolate and Peanut Butter Mousse. I enjoyed one last draft beer from the small but mighty draft beer list, and we all wandered outside to take in our last night in the city. It was, in fact, our last night in Europe after spending 148 days in the region. As last meals go, this was a great one.

Manchester knows how to treat its tourists, the one exception being the security line at the airport. We were staying outside of the city centre in an area called Heaton Chapel, but it was a short train side into Manchester Picadilly, where we could either catch the free shuttle bus or walk into town. Refuge by Volta is a short walk from the station, while both Oast House and The Botanist are a pleasant 15 minute walk through town. Dining at the three kid friendly restaurants above gave as a great chance to enjoy a mix of traditional English cooking combined international flavours. Manchester’s people are friendly, its beer is amazing, and its food is not to be missed. 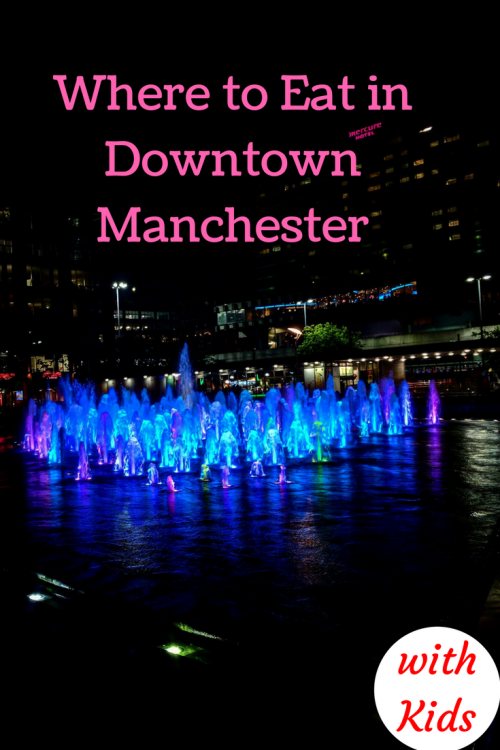