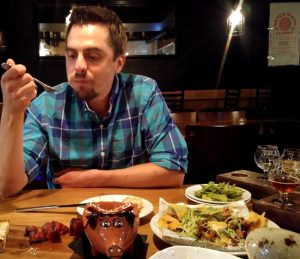 One Saturday in May, we were determined to spend some time outdoors. The weather in Toronto this spring has not exactly been pleasant and after temperatures jumped to the high teens the week before, only to plummet that past weekend, we gave up waiting, bought a TTC Group pass, and made our way to the Bloor West area, where a few new breweries had opened that demanded inspection. After stopping by the Blood Brothers Brewing bottle shop and the Burdock Brewery, we ended our 50 minute walking tour at the Folly Brewpub, cold, hungry, and ready to relax.

A good brewpub is my ideal place to spend a Saturday afternoon, and the growing number of these fine establishments in Toronto has only increased my love of this city. A few years ago, after growing a little fatigued with the options within walking distance of our downtown condo, we visited the Junction district to dine at the Indie Ale House, and the place was a revelation. With close to a dozen beers on tap in a wide range of styles, as well as some great food to please all ages, the place became an instant favorite of ours, and we make it a point to make the 10 km journey to the area at least once a summer. Our discovery of the Folly Brewpub this past Saturday was a similar revelation.

When we walk into a new restaurant, we have a checklist of needs that we hope will be met: an intriguing beer list with some great cocktail options; a somewhat secluded area to sit with the kids, preferably with bench seating and a place to park our double stroller; at least a dozen food options, with a few the little ones are sure to like; and a fairly noisy atmosphere with music playing at a respectable level, loud enough to drown out the occasional yelling match between the kids, but not so loud that we need to sit in silence as we dine. Folly met all of these prerequisites, and their food greatly exceeded our expectations. 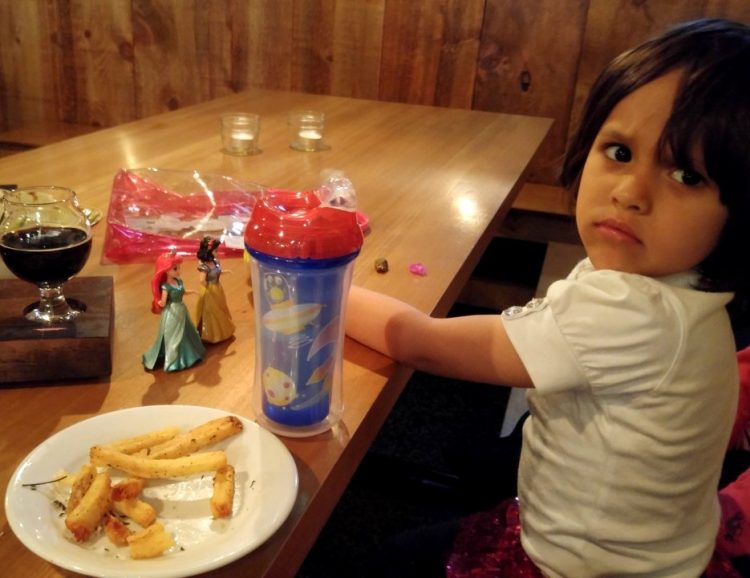 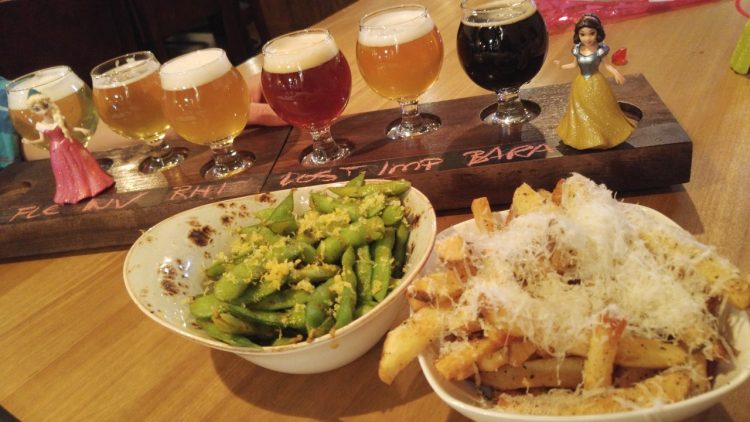 We were all pretty hungry by the time we walked through Folly’s front door, and a quick scan of the menu had our mouths watering. We quickly ordered 6 sample beers from the tap list of 10 beers brewed on site, and added on an order of Folly Fries and Sautéed Edamame, two of the Little Monkeys favorites. Before we finished reading over the rest of the menu, our server was back with the fries, edamame, and 2 beer flights. Upon seeing the heap of Parmesan cheese and herbs infused into the fries, our little picky eater started to fuss, but then her hunger took over and she decided to try one of the fries from the bottom of the bowl, cheese removed but herbs intact. The verdict… it was love. I decided to try one, despite being hesitant of the Parmesan, and had to admit that it was one of the best french fries I’d tasted in the city. Lightly fried and very flavorful, the fries alone will assure a repeat trip for us. The edamame had a sweet chili sauce and was slightly too spicy for the little ones, but they ate the beans inside while Yashy and I greatly enjoyed the lemon and chili seasoning on the outside. 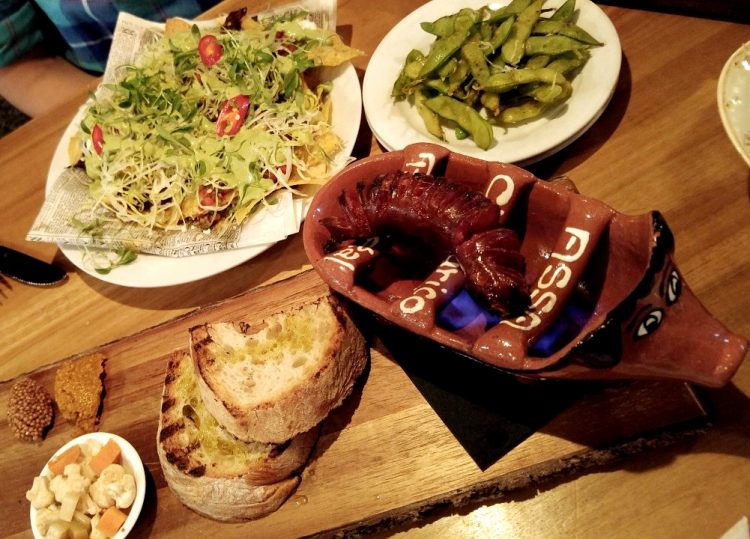 We ordered the Pulled Pork Nachos and Flaming Chorizo once we finished scanning the menu. The Flaming Chorizo is exactly that, a dish that comes out of the kitchen on fire, dying down after a few minutes on the table. The kids loved that, and when I tried the chorizo itself, along with the mustard blend accompanying the dish, I knew we picked the right food option. The nachos arrived on a small plate, perfect for 2 people to share, covered with a creamy avocado sauce mixed with shredded iceberg lettuce. This was the first time I had ever eaten nachos and felt like I was eating a somewhat healthy dish. It too, was a very flavourful dish. These were some of the finer pub dishes I have had in awhile.

Folly’s beers are all Belgium inspired recipes. The beers we ordered included Flemish Cap, and old world saison; Imposter Syndrome, a farmhouse IPA, Little Barasway, a farmhouse porter, Lost Words, a Belgian-inspired brown ale, and Rhizome:Jarrylo/Belma, an american farmhouse ale. Yashy and I both liked Rhizome the most, a crisp ale with a nice fruity aftertaste. I later tried Shadow Puppets, a great tasting Table Beer with only 4% alcohol, making it suitable for afternoon drinking with the kids. The pub also has a nice bottle selection that included a few sour options out of Quebec and Belgium. I ordered a Cuvée Soeur’ise, a fruit/vegetable beer with a strong tart cherry finish, that made for a very tasty liquid dessert.

The Little Man spent the first half of the meal catching Zs but woke up once some friends arrived with their extremely active 1 year old. Because we arrived at midday on a Saturday, we were able to park ourselves at the back of the restaurant next to the tanks at a picnic table large enough for a party of 12. The kids made a friend when another couple arrived with their young daughter and so we were able to enjoy a delicious meal while the kids made use of some coloring books and the stack of dolls the Little Monkey insists on bringing everywhere. We spent a perfect afternoon at Folly, enjoying the fact that the beers came in sample sizes, allowing us to taste the range of available options without stumbling out of the pub, and consuming several outstanding dishes that even the kids enjoyed.