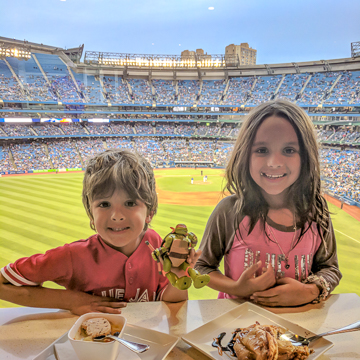 I lived in Nova Scotia when the Rogers Centre first opened in 1989, but I could sense the excitement from 2,000 kilometres away. Originally known as the Skydome, the arena was a marvel at the time. Its retractable roof allowed the Blue Jays to play outdoors on sunny days and indoors when it rained. With an on-site hotel and a Hard Rock Cafe that both featured views of the field, the stadium catered to everyone.

Disclosure : We were guests of Sportsnet Grill but, as always, opinions are TOTALLY ours!

By the time I moved to the city and began attending games, the Rogers Centre had lost much of its luster. Newer, state-or-the-art stadiums had opened in New York, Seattle, and San Francisco. The Rogers Centre had started to show its age, but I still loved it – at first. Then, I got older. My tastes changed, and though I still love the Blue Jays, the ball park experience is no longer something I crave. Though we have of course e experienced the Blue Jays game with our kids.

What often keeps me away from Blue Jays games are the amenities. Though the food options have improved in recent years, the concession stands do not offer beer from any of the city’s long list of craft breweries. For me, the idea of paying close to $15 for a Bud Light is cringeworthy. And so I, like many, prefer to watch the Blue Jays at home or in one of the many pubs in the stadium’s vicinity, allowing me to watch the game on a big screen TV while enjoying Toronto’s sublime cuisine and craft beer options.

The only thing missing is the excitement of the home crowd.

Our family was recently invited to watch a game from one of the restaurant’s numerous window tables and we had a blast. I didn’t really know what to expect from the experience, but the minute we sat down, my attention was drawn to the field. We were enjoying box level seats from the comfort of a dinner table. Upon glancing at the menu, we knew we were in a good place. They are welcoming to families and not only have highchairs for kids, but the servers were genuinely interested in interacting with our kids and chatting them up. We also found a nook to park our scooters at and saw a few families with strollers.

The Kids Menu at the Sportsnet Grill features both breakfast and dinner options, all served with a drink. The options are what you might expect: burgers, chicken tenders, pizza, and grilled cheese, amongst others. You probably won’t have a hard time finding something the kids will enjoy. Our kids shared the burger and the pizza, with the burger being the favourite at our table.

For the adults, the choices are plentiful. The Pre-Game Warmup Menu includes pub-style staples like wings and nachos, plus a few intriguing options like Blackened Beef Bites and Tacos, which we ordered. The beef bites arrived served with a smoked jalapeno mayo while the tacos contained sweet pepper and cabbage slaw. Both were great alternatives to concession styles foods like hot dogs and pizza. In a section of the menu called, “Take One for the Team”, a number of party platters are available as well, ideal for groups looking for a range of options.

I was happy to see a number of entree sized salads available and opted for the Saku Block Tuna Salad, served with a ginger soy dressing. This was the type of healthy choice that is hard to find inside the stadium. A range of burgers and steaks are also available, but Yashy went with the Rice Bowl, which contained Caribbean style sticky shrimp served with dirty rice, mango and avocado. Having great tasting healthy options was very appealing and kept us from leaving the game feeling like we just left an all-you-can-eat buffet, which can happen after a game day meal of pizza and fries.

As nice as the food options were, it was the choice of craft beer available that made the afternoon special for me. I’ve never enjoyed a good beer inside the Rogers Centre. I’ve never had the option. At the Sportsnet Grill, I finally found something I liked. The restaurant featured taps from Great Lakes Brewery, Collective Arts, and Left Field Brewing, all local craft breweries producing excellent beers, some of the best in Canada. I started with Bang-Bang, Left Field’s delicious Dry Hopped Sour, before sipping on an Octopus Wants to Fight, a very tasty IPA produced by Great Lakes. I never expected to taste such great beer in the Rogers Centre.

The experience of watching the game behind glass was an interesting one. The sounds are muted and so I admit to missing the audible audience buzz one feels when watching the game from the stands. However, the game day experience, the thrill of watching live baseball with tens of thousands of fans, is retained. We attended a game in early September, and sadly, the Blue Jays had been eliminated from playoff contention. Had we caught a game early in the season, or even better, during a playoff run, the excitement level would have been much higher.

If you enjoy attending Blue Jays games, I encourage you to check out the Sportsnet Grill on one of your next visits. You may even prefer it to sitting in the bleachers. The restaurant’s website has a reservation portal where you can book ahead, but states that you should call the restaurant if you are looking to secure a table by the window. For most games, there is only a $50 minimum food and beverage purchase to sit at a window table. The only exceptions are Opening Day and Canada Day, as well as games versus Boston or New York, for which a $10 per seat viewing fee applies.

The prices at the Sportsnet Grill are reasonable, similar to what you might find at a nearby steakhouse and roughly 25% higher than similar food options at a pub. The drinks are much cheaper than they at the concession stands. For the kids, this was a great place for them to enjoy the game without getting too restless in the stands. The restaurant is spacious and the bathrooms are clean. Every parents dream when dining out with kids.