Note: This is the ninth entry in a series of posts looking at the Kid Friendliness, Entertainment Value, and Life Lessons for Kids from the Disney Princess movies. Previous posts covered “Snow White and the Seven Dwarfs”, “Cinderella”, “Sleeping Beauty”, “The Little Mermaid”, “Beauty and the Beast”, “Aladdin”, “Pocahontas”, and “Mulan”

A couple months ago, we asked the Little Monkey what she wants for her upcoming birthday, praying that she would not remember seeing the kid-sized Barbie Convertible on sale at Canadian Tire. She didn’t, but did provide the unusual request of a MagiClip Tiana. Without a doubt the toys in her extensive collection that have produced the most hours of enjoyment, the MagiClip dolls are a series of small Disney Princess figurines that come with interchangeable clip-on dresses. The Little Monkey has been fascinated with the dolls since her second birthday. At first, she would meticulously dress the princesses in their proper attire and arrange them at the dinner table, and she would always keep one under her pillow at night. Eventually, she would discover the thrill of interchanging (ie sharing) the dresses, and the princesses soon enjoyed imaginary tea parties and sleepovers dressed in each other’s royal gowns. She currently has Anna, Elsa, Belle, Ariel, and Rapunzel in her collection. After seeing “The Princess and the Frog”, she realized that she didn’t have a doll for the film’s heroine, Tiana, and she is eager to introduce her to the other princesses. Oh, and by the way, it’s a pretty hard doll to find. I located it on the US Toys R Us website packaged with 6 other dolls. The search was my introduction to the next dozen years of seeking out the hottest toys at Christmas time.

Disclosure : We’re part of the Netflix Streamteam and receive special perks, but as always, opinions are totally ours!

The setting for “The Princess in the Frog”, New Orleans in the 1920s, makes Tiana the most modern of all Disney Princesses. It’s also one of the only Disney Princess movies we’ve been able to find on Netflix, and one Little Monkey plays often from her “recent” list. Both past and present Disney Princess films are usually set in grand, fairy tale kingdoms. This film too, is derived from a fairy tale, “The Frog Prince” by The Brothers Grimm, but the shift in setting to bustling New Orleans allows the film to use the great musical influences and inspired cuisine of the south to create several entertaining musical numbers, and the bayou provides a great backdrop for the predicament Tiana finds herself in the second half of the film. 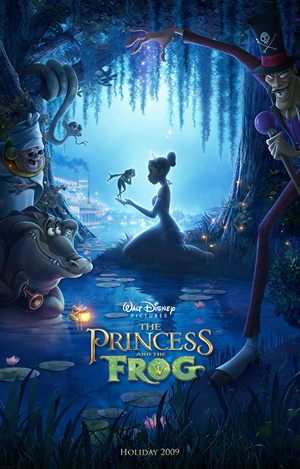 Great songs, main characters who turn into charming frogs, an adventure through the bayou, and a colorful cast of sidekicks, including Louis, the trumpet playing alligator, and Ray the Firefly, who is in love with the firefly-like evening star, make “The Princess and the Frog” a very engaging, family friendly movie that ranks amongst the most entertaining of the Disney Princess films.

The bayou scenes are especially charming, as Tiana and Naveen, a Prince visiting New Orleans who is down on his luck, befriend Louis and Ray, both great additions to the rich Disney treasure trove of sidekicks. The four characters find themselves in a position to work together help each other achieve their dreams, leading into a very satisfying conclusion to the story, with interesting twists on the famous story of the Frog Prince.

The film’s main villain, Dr. Facilier, AKA the Shadow Man, has a somewhat frightening appearance but no more so than most Disney villains. His entourage includes evil, shadow-like spirits who are assisting him in his plan to take over New Orleans. Dr. Facilier’s henchmen are quite similar to Ursula’s minions from “The Little Mermaid”.

Ray, the charming firefly who befriends Tiana and Naveed in the Bayou, is squashed by Dr. Facilier and is later shown to die in a tearful goodbye with with Tiana, Naveed, and Louis; however, the tone of the scene is then lightened when we see a new star appear in the sky next to The Evening Star, implying that Ray has joined his mysterious love. The end result is very uplifting.

Tiana is a kind, adventurous women with the modest dream of opening a restaurant. She makes wise decisions in raising the money through hard work. When disaster strikes, she makes the best of the situation, making new friends and relying on old ones to help her out of her predicament – needing to raise money for her restaurant before losing out to another bidder on her dream location. Tiana is determined but always insists being loyal to her friends, a loyalty that pays of when she finds happiness with Naveed and retains the friendship of her friend and Naveen’s former betrothed, Charlotte, the daughter of the richest man in town.

Naveen finds himself transformed into a frog when he is deceived by Dr. Facilier. Thinking that the doctor can help make his dreams come true, Naveen doesn’t get the result he expects. In addition to the obvious lesson that strangers should not be trusted, Naveed makes the mistake of thinking that he can achieve his goals by taking shortcuts. Rather than working to grow his own fortune, Naveen hopes to take the easy way out by marrying the richest girl in town.

Walt Disney made all the right decisions in producing “The Princess and the Frog”, but when it came to marketing the film, the efforts were misguided. Disney President Ed Catmull admits that they made some mistakes in the promotion of the film and blames the use of the word “princess’ in the film’s title, which led many moviegoers to believe that the film was for little girls only. The disappointing box office may be attributed to the fact that The Disney Princess brand launched in the early 2000s, after “Mulan”, making Tiana the first new Disney Princess to be added to the original group. The success of the decidedly child focused product line may have further enhanced public perception that the film was for kids only. The movie then opened five days before “Avatar”, the top grossing film of all time, further sealing its lackluster box office performance.