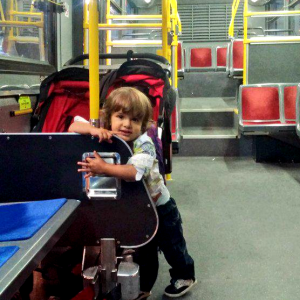 Living in downtown Toronto with two small kids has presented some challenges, especially when it comes to escaping the downtown core of this sprawling region. Toronto’s much maligned public transit system does provide access to almost every corner of the city, but travelling to a few of these areas can take upwards of two hours on public transit. We have been travelling around Toronto with kids for almost five years now, and here are a few tips for making the most of Toronto’s transit options when you are travelling with small children.

Taking Kids on the TTC/Subway

For us, bringing small children on the Toronto Subway usually means bringing a stroller, which has given us an appreciation for how difficult wheelchair bound customers must find public transportation. A little under half of the subway stations in Toronto have elevators (34 of 69 stations) and, in a few of those stations, the elevator system is a labyrinth. Often, users need to use 2 or 3 different elevators, within each station, to reach their destination. One such station is Bloor-Yonge, one of the hubs of the system. However, using the TTC can take you to almost any point along Yonge Street, Bloor Street, or Danforth Ave. Destinations within a 5 minute walk of a subway stop include the Eaton Centre, Yorkdale Mall, the Air Canada Centre, Greektown, the Royal Ontario Museum, The Art Gallery of Ontario, Yorkville, the Church Street Village, the Annex on Bloor, High Park, and even Scarborough Town Centre. Even though only 34 stations have elevators, almost all have escalators leading to and from the platform (for those of us who don’t follow the rules by taking strollers on escalators). On weekends families can buy a day pass which allows for unlimited travel for 2 adults and 4 kids under the age of 19.  Note that kids under 12 ride free on the TTC, which includes all subways, streetcars, and public buses operating in the city.

Toronto’s streetcar system is undergoing an overhaul, with larger, wheelchair accessible vehicles, replacing a fleet that is currently difficult to ride with children in strollers. These older streetcars have stairs at the front and rear doors. A couple of times, I actually lifted our double stroller in through the front door, but in doing so, left little room for other riders to squeeze by (this could never be done during rush hours). The rear doors are too narrow for our double stroller and likely for most large strollers. Unfortunately, streetcars are the only TTC vehicles that service some of Toronto’s best neighborhoods, including the Beaches, Queen West, King West, Chinatown, the Waterfront, and Little Italy on College. Until the new fleet covers all lines, riding the streetcar is not advisable if you are rocking a stroller. The new models currently service Bathurst St., Spadina St., and Queens Quay, but older streetcars also service those lines and so waiting for one of the newer cars can take time. 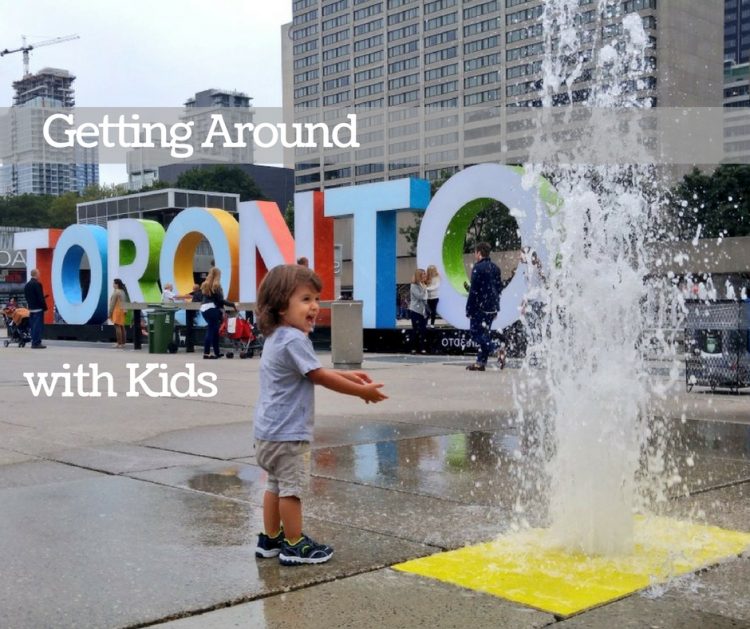 When UberX first came to Toronto, we brought the kids with us on a couple rides before doing some research and discovering that it is illegal for a child to ride in a non-licensed taxi without a car seat. UberX is a ridesharing service and is therefore no different from any other car on the road (though this could soon change). When we need to travel via car, our only option with kids is to take a taxi, since kids are allowed in licensed taxis without a car seat. This is rarely our favorite option. Many taxi drivers in Toronto travel at dangerously fast speeds. We were recently on a ride in which a taxi driver unwittingly ran a red light. I rarely feel safe riding in a taxi, and driving on a highway with a child feels very dangerous to me. My hope is that Uber may offer a better solution in Toronto at some point. We were pleased to discover that Uber in Washington, DC, does have a service in which 1 car seat is available. Having a similar service (Uber Family) in Toronto would be a welcome option, but it’s not here yet. Pricewise, taking a taxi to most downtown areas costs under $20.

If you are looking for the best travel booster checkout the mifold. You can find the Mifold here on the US Amazon

website (clicking that link will give us a small commission at no extra cost to you).

We occasionally take trips to nearby Oakville, to visit my sister and her family, and to Niagara-on-the-Lake, to visit Yashy’s parents. Our subscription to Zipcar is ideal for these types of trips. At the cost of about $125 a day, we can rent a Zipcar from one of the numerous locations in our vicinity, usually a parking garage in a condo or office building. We have two car seats that we keep in our storage locker and so we are set up to take 1 to 2 day trips very easily. Zipcar fees include gas and up to 200 km per day, perfect for a trip to Niagara. If you are visiting and have access to car seats, Zipcar is a great option, providing the flexibility to visit anywhere in the city or the region. A Zipcar membership provides access to cars in any city where the service operates. The one drawback in Toronto is the cost of parking, which can be upwards of $40 a day. 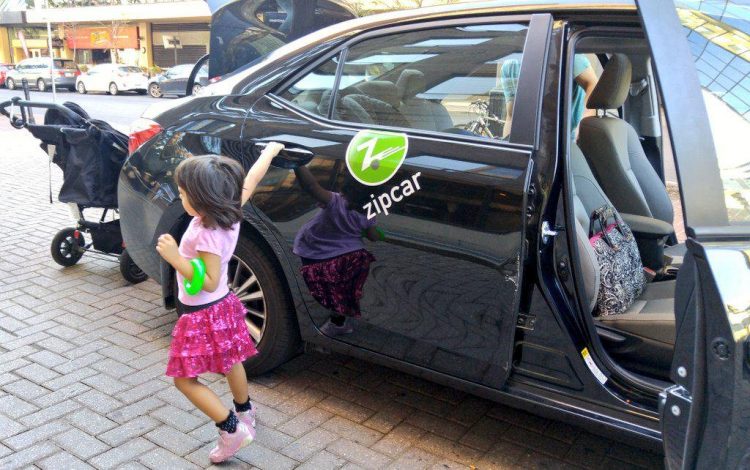 Toronto is a very walkable city. Its streets follow a North-South, East-West grid, and streets like Queen Street West and College St. provide miles of food and shopping options that make those areas some of the finest places to eat and shop in the world. Toronto’s downtown hub is Union Station, where VIA Rail, the GO Bus, and the TTC all intersect, and Queen West is only about 1 km from Union. On Saturday and Sundays afternoons in Spring, Summer, and Fall, we often find ourselves walking upwards of 10 km as we venture out to satiate whatever food craving we get that day. Often, we just head out with no destination in mind, letting the busy streets of Toronto dictate our path. Walking is my favorite means of transportation in Toronto.

The Go Bus provides easy access to most of the cities that surround Toronto. Mississauga, Scarborough, Oakville, Burlington, Hamilton, Brampton, Markham, Ajax, Whitby and Oshawa are very populous cities in the region. Mississauga has a larger population than quite a few American cities, including Seattle, Denver, and Washington, to name a few, and is a hub for great Asian and Indian food. The Go Bus has a number of stations in the region, and, based on a recent news story about a lost Syrian refugee family, also has a pretty friendly rider base too. The Go Bus that runs along Lakeshore, covering most of the regions listed above, is actually a train that runs regularly throughout the day, and the train is stroller friendly and spacious.

Using the UP Express

Pearson Airport is at the upper boundary of Toronto and the commute downtown via the TTC takes about an 1 hour, including a 15 bus ride to Kipling Subway Station, the westernmost station on the line. The recently opened UP Express takes riders from Terminal 1 at Pearson Airport to one of three destinations in the city, the final being Union Station. The trip only takes 20 minutes, and I was very impressed when we rode the train for the first time recently. With kids, taking the Up Express lets me avoid taking a $65 taxi ride, on the highway, and allows me to relax and prepare for (or unwind from) a trip. At $12 per person ($9 if you buy a Presto pass, which also works on the TTC), it’s a great deal. 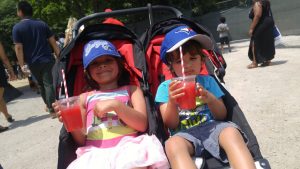 The region in and around Toronto is one of the most thriving areas in the world. With so much to see, and so many good places to eat, forming a plan is a good idea. Once that’s done, getting around to the places you want to visit is the tricky part. Toronto’s transportation system could use some improvement, but the increasingly congested highways can cause visitors to spend more time stuck in traffic than they anticipated. With the right scheduling, taking public transit with the TTC and private transit services like Go and the UP Express, are usually the best options for getting around Toronto.